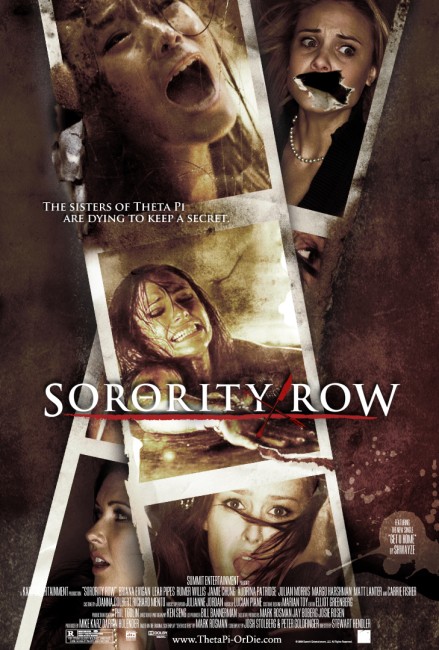 At the Theta Phi sorority house at Rosman University, the sorority’s top five girls stage a prank to get back at Garret, the former boyfriend of Megan, one of the Theta Phi sisters, for cheating on her. Megan has let Garret believe that they are getting back together. The other girls have given him some pills, only for Megan to fake an adverse reaction as they make out, fooling him into believing that the pills have killed her. As part of the prank, the girls take Garret out to a quarry where they make a big thing about preparing to dispose of Megan’s body. However, the gag goes wrong after Garret stabs a tire-iron through the still living Megan’s chest, killing her for real. The girls are panicked but the leader Jessica persuades them it would be best that they throw the body down the mineshaft. She forces them to swear oaths to the sorority to never speak about it. Eight months later, it is graduation day. The sorority house throws a final party. However, a hooded figure turns up at the party, taunting the girls with its knowledge of what they did before it stalks and kills them.

Sorority Row is a nominal remake of the 1980s slasher film The House on Sorority Row (1983). The original’s director Mark Rosman has signed on as executive producer and the screenplay is credited as being based on Rosman’s screenplay Seven Sisters, which would appear to have been a pre-release title for The House on Sorority Row. There are nominal similarities between the two films – both feature the girls of the Theta Phi sorority house being stalked during a graduation party. Both feature a prank gone wrong, although in the original this involved the girls’ pretending to shoot the crippled housemother.

There is a vaguely similar story about them agreeing to hide the body – although in the original the body kept turning up throughout the party, whereas here there is now a plot borrowed from I Know What You Did Last Summer (1997) where they dispose of it and make a pact never to talk about it again.

In the original, the murder weapon is the housemother’s cane, whereas here it is a bladed version of the tire iron that was used to kill the girl. In the original, the killer turns out to be the housemother’s deformed son – a plot strand more in common with the Black Christmas (2006) remake – whereas here the killer turns out to be a randomly chosen member of the cast who has the improbable slasher movie motivation of wanting to purify the house and take Briana Evigan away.

Sorority Row has a modest effectiveness. It is slickly made for the most part, hitting in from the opening staging of a dorm party and the prank being pulled on Matt O’Leary, which goes wrong and segues into the I Know What You Did pact. The five principal girls (who include Bruce Willis and Demi Moore’s now grown-up daughter Rumer Willis) are played with a bitchiness and their dialogue has a number of amusingly barbed taunts.

Stewart Hendler delivers an okay string of killings – the most bizarre being when Maxx Hennard is impaled with the tire iron-knife through a wall and left jammed upside down halfway down a dumb waiter shaft with his legs sticking out the top. Being an 00s slasher film, Sorority Row is far more chaste and modest in regard to the gratuitous toplessness of its 1980s counterparts, although Stewart Hendler does at least throw in one superfluous shower room scene.

Eventually, Sorority Row never fully surmounts the routine – it is a capable run through of the formula but nothing more than that. The film’s scene stealer is a now decidedly middle-aged Carrie Fisher as the housemother wielding a shotgun against the psycho with lines like: “Please don’t think I’m afraid of you, I run a house with fifty crazy bitches.”

Director Stewart Hendler had previously made the horror film Whisper (2007). Subsequent to Sorority Row, he has specialised in genre-related web mini-series with the likes of H+ (2011-13) and Halo 4: Forward Unto Dawn (2012), and the superhero film Max Steel (2016).