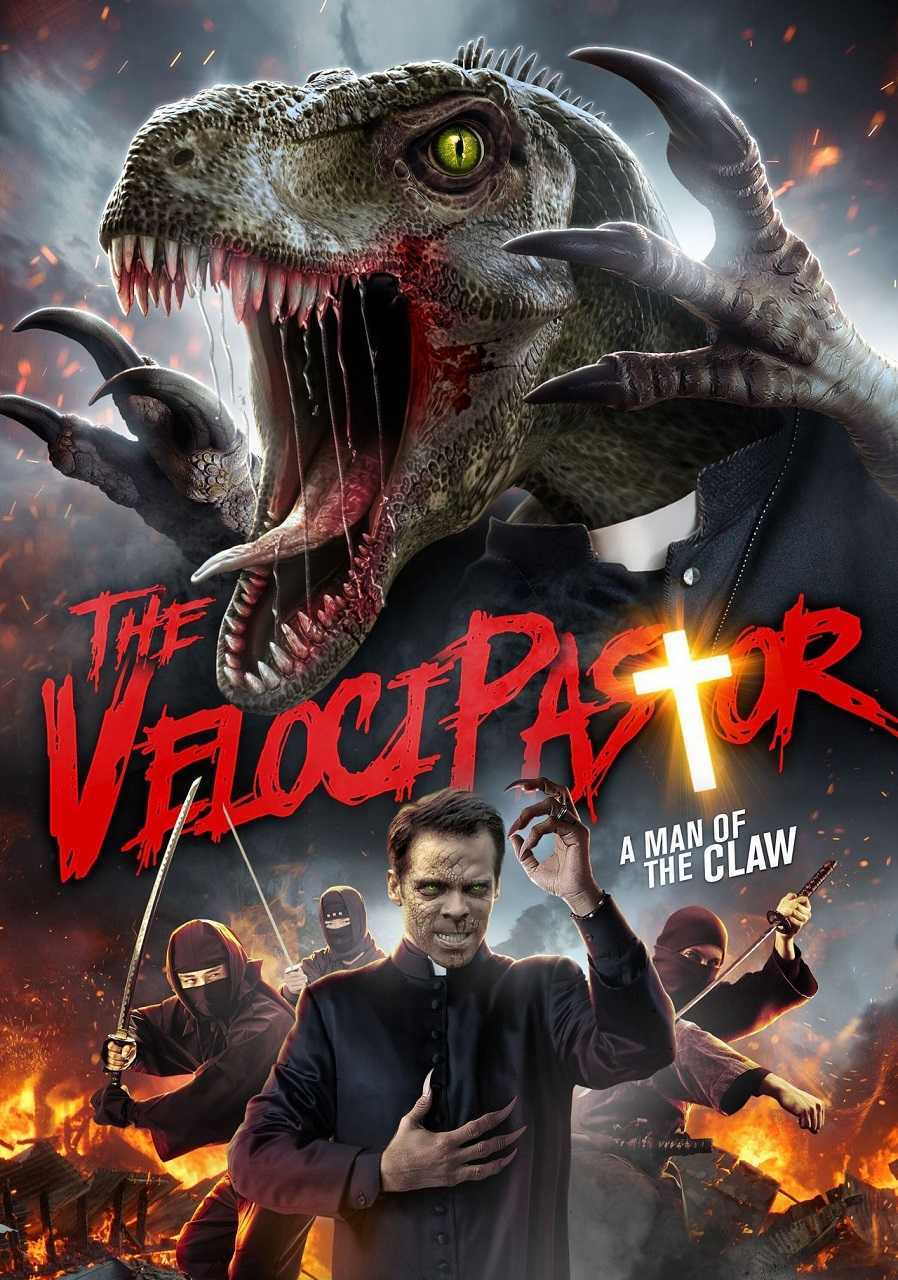 Doug Jones, a priest in New York City, has a loss of faith after he witnesses his parents being killed by a car bomb. His superior Father Stewart suggests that Doug take a sabbatical. In the wilderness of China, Doug encounters a peasant girl shot by ninjas who gives him a dinosaur tooth with which scratches his hand. Recovering back in the US, Doug stumbles into the park where he turns into a dinosaur and devours a thug who is harassing the hooker Carol. She takes him home and tries to persuade him that he could use his powers for good. After hearing the confession of the man who killed his parents, Doug transforms and kills him, Doug returns to Carol and they set out to stop evil people. During the course of their crusade, Doug finds he is attracted to Carol. This earns the disapproval of Father Stewart who decides Doug must be exorcised. Meanwhile, the Chinese ninjas come on a mission to eliminate Doug.

The VelociPastor was a word of mouth hit for Brendan Steere who had only previously made the little-seen horror film Animosity (2003) and a bunch of short films. Steere says he was inspired after he tried to spell ‘velociraptor’ on his phone but the autocorrect suggested ‘veloci pastor’ after which the concept just fell into place. He originally made this as a 3½ minute short film, The VelociPastor (2011), which became a viral phenomenon. Steere sought for several years to obtain crowdsource funding and eventually did. The finished film premiered at various festivals throughout 2018 and was released to VOD platforms in 2019.

Like Sharknado (2013), Clownado (2019) and a bunch of films with titles such as The Incredibly Strange Creatures That Stopped Living and Became Mixed-Up Zombies (1964), Attack of the Killer Tomatoes (1978), Sorority Babes from the Slimeball Bowl-O-Rama (1987) and Attack of the Killer Donuts (2016) – see the Deliberately Ridiculous Titles theme at the bottom of the page for a more comprehensive listing – The VelociPastor gets you in your seat to watch on the sheer absurdity of its title alone.

This is a phenomenon that occurred to Troma Films in the mid-80s where they released films like Stuff Stephanie in the Incinerator (1989), Fertilize the Blaspheming Bombshell (1990), Invasion of the Space Preachers (1990), A Nymphoid Barbarian in Dinosaur Hell (1990), Chopper Chicks in Zombietown (1991), The Killer Condom (1996) and Poultrygeist: Night of the Chicken Dead (2006), among others, where the title was often the most amusing part about the film.

The VelociPastor comes with an amused awareness of its own shortcomings. In the opening moments, there is the appealing scene where Gregory James Cohan rushes out of the church to see his parents die in a car explosion where the explosion is represented by an empty screen and a notice: “VFX: Car on Fire.” Things become even more entertainingly absurd with the introduction of the dinosaur, which looks like a version of Barney painted a poo brown and has a laughable lack of conviction in the effects department. But then you realise that this is a film that has critic-proofed itself by taking such a tongue-in-cheek tone that this doesn’t matter at all.

The VelociPastor is going to be royally ridiculed and called a bad movie by people who seemingly have no ability to differentiate between inept and something that is making fun of its shortcomings and will only sit there and laugh at the obviously absurd effects. What everybody is going to miss in all of this is the fact that The VelociPastor is often surprisingly well made for a no-budget film. It is well shot and Brendan Steere, who also edits, has some surprisingly inventive editing schemes, making great use of split screen.

One of the better things about the film is its casting. Gregory James Cohan looks like a dead ringer for Michael C. Hall in tv’s Dexter (2006-13). Cohan plays with an intent seriousness the entire way through – you can see the way emotions and reactions play out on his face – and does not let his performance once slip into self-parody. The same can be said for Alyssa Kempinski who does a fine job playing off Cohan, not to mention joins in the kicking off ninja ass with a great deal of accomplished ferocity.

The only point for me where The VelociPastor falls down is that it is a film hoping to get you in the door based on the title alone. It sets its title concept up within the first few minutes and then tries to find something else to do with it. As a result, the script is unfocused and meanders off topic at times – flashbacks to Vietnam, scenes with the ninjas laughing, the seance. The menace arrayed against The VelociPastor is not a terribly strong one. Brendan Steere is someone with promise and I look forward to seeing what he does next but you feel he would gain immensely from the employment of a good script editor.