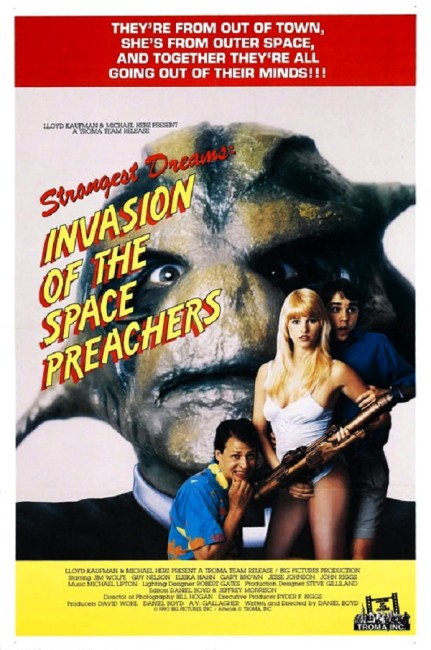 Walter Bennett and Rick Lowery, best friends in Charleston, South Carolina, sneak away for a guys’ weekend together, having rented a cabin in the woods at Loganville. They arrive to find the cabin a dump. While out, they discover a crashed spaceship and an alien in a suit. It pleads help and they take it back and place it in the barn. In the morning, the alien has emerged from its suit as a beautiful girl. They name her Nova. Walter develops an attraction to her. She soon reveals her mission to them – that she has come to stop one of her people who is posing as the preacher Reverend Lash and is broadcasting messages by radio that turn the listeners into zombified slaves. They must stop Lash before he takes to the national television waves.

This was a low-budget production that was picked up for distribution by Troma. During this era, Troma specialised in selling films with outrageous, attention-getting titles – see the likes of I Was a Teenage TV Terrorist (1985), Surf Nazis Must Die (1987), Stuff Stephanie in the Incinerator (1989), A Nymphoid Barbarian in Dinosaur Hell (1990), Fertilize the Blaspheming Bombshell! (1992), Space Zombie Bingo!!! (1993), Pterodactyl Woman from Beverly Hills (1997), Scrotal Vengeance (2001) and Poultrygeist: Night of the Chicken Dead (2006) to name but a sampling.

With few exceptions – Chopper Chicks in Zombietown (1991), Killer Nerd (1991), The Killer Condom (1996) – most of the films picked up by Troma were not very good. Needless to say, Invasion of the Space Preachers was not one of these exceptions. It is amateurishly made and on a low budget. It is clear that director Daniel Boyd has not had much experience handling actors – or that they, who to a single one of them have not had any other film credits following this, are inexperienced novices. Too often in scenes deliveries should have been tightened up or miss the punchline of the moment and are allowed to fall flat.

There is no real plot to the film. An alien space girl (Eliska Hahn) is found but in no time her alienness is forgotten and she has slotted in to become a regular girlfriend – in fact, she could just as easily be a regular local girl that Jim Wolfe hooks up with. In the last twenty minutes, the threat of the space preachers becomes apparent and the film fitfully rises to have the heroes fight to stop their scheme (something to do with mind control that will be broadcast via television).

The film is shot in the real Appalachia (South Carolina). Daniel Boyd and co get a few digs in, notably a sequence that parodies the famous Dueling Banjos scenes from Deliverance (1972). In one of the stranger scenes, store owner John Marshall greets the friends “Welcome to the Land of the Free and the home of Donald Trump.” (This is a misnomer in that Trump was born in Queens, New York, which is at least seven states away from South Carolina).

As with most of these Troma releases, the most amusing thing about the film is its deliberately ridiculous title. While accurate in terms of describing what happens, unlike some of Troma’s other titles, nothing in the film comes anywhere near the appealing absurdity it suggests.

Invasion of the Space Preachers was the second film for Daniel Boyd who had previously made the horror anthology Chillers (1987). Boyd next made the non-genre Paradise Park (1992) but does not appear to have done anything since.