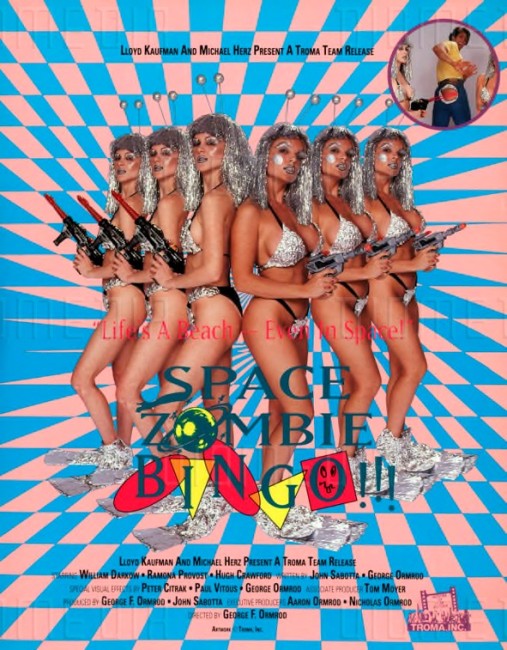 Earth is under invasion by space zombies from the planet Plankton. As the space zombies wreak havoc and destroy cities, the US appoints Major Kent Bendvover to lead the fight back.

The 1980s gave us the Deliberately Bad Film. This was a period that saw filmmakers led by Joe Dante paying homage to films of the 1950s and earlier in terms of in-references, the borrowing of character names, cameos from actors of the era and so on. It was also the period that saw ‘The Golden Turkey Awards (1980), which served to create a great fascination around Edward D. Wood, Jr after he was labelled the World’s Worst Director, and Plan 9 from Outer Space (1959) was called the worst film ever made. This saw the rise of the cult of the bad movie. This filtered back through in terms of a number of works that set out to mimic the style of cheesy or deliberately bad films with the likes of Big Meat Eater (1982), The Revenge of the Teenage Vixens from Outer Space (1986), Amazon Women on the Moon (1987), Lobster Man from Mars (1989) and Top of the Food Chain! (1999), among others. (For more detail see Deliberately Bad Films).

Space Zombie Bingo!!! is another of these Deliberately Bad Films. It even goes so far as to directly homage the films of Edward D. Wood Jr. It opens with Michael Wood as a clairvoyant narrator named Crisko clearly modelled after Criswell in Plan 9 and conducting a fairly accurate mimicry of Criswell’s delivery. Later the film slightly misquotes the line from Plan 9 – “And these people are dead. And someone is responsible.” There are also scenes set in the graveyard intended to homage Night of the Living Dead (1968).

There are plenty in the way of bad effects, including a really obvious flying saucer coming down in the opening scenes. The aliens themselves are dressed in black and wear welder’s masks with ping-pong ball antennae on wires and diving flippers on their feet. Their communicator is a rabbit’s ears tv aerial.

The film has a deliberately silliness – this is a film that seems to think it is witty naming characters Herpes Simplex and Kent Bendover. William Darkow is sent into action against the aliens but gives a performance where he is clearly not taking anything that happens seriously – and nothing much happens when he tackles the aliens anyway. At one point, a tv newscaster breaks the fourth wall in his reading to address people watching the film on rented videotape (the medium that Space Zombie Bingo!!! would have been distributed in in its day).

There is not much to the film. It has less a plot than it feels like a series of loose comedy scenes randomly slung together that vaguely intersect with the idea of an alien invasion. There is a sloppiness of technical execution. It is not a film that ends up being particularly funny – there were a lot cleverer and funnier films made during the Deliberately Bad Film cycle.

Director George Omrod has never been heard from again.

The film received a release through Troma. The one complaint would be that while the aliens are referred to as zombies, they are not – a zombie being the resurrected dead whereas these just seem regular alien invaders. It probably feels redundant to point out that the film feature no games of bingo either.