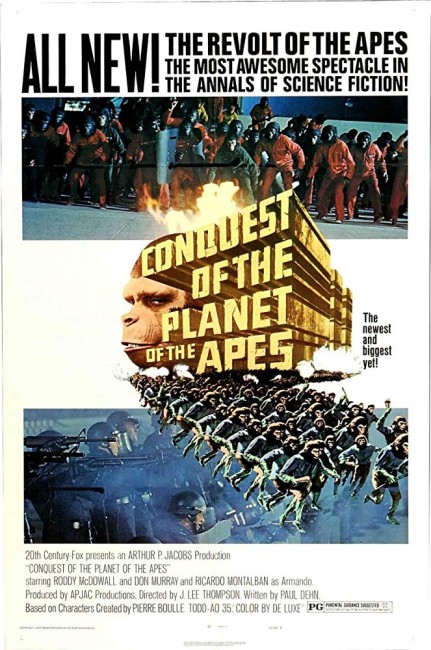 In the year 1991, a space-born plague has killed off all cats and dogs. Following this, apes have become man’s domesticated servants. Armando the circus owner visits the city with the now adult Milo, the talking chimpanzee son of Cornelius and Zira, whose existence he has kept hidden all these years. Milo inadvertently reveals himself when he calls out at the brutality as he sees a human beating an ape. He is forced to go into hiding as Breck, the city governor, begins an ape-hunt for him. In hiding, he takes the name Caesar and stirs rebellion amongst the ape populace.

With Conquest of the Planet of the Apes, the series sets out to chart the beginning of the events that lead up to the ape-ruled future. On script is former film critic Paul Dehn who wrote every film in the series from Beneath the Planet of the Apes onwards. In the director’s chair is J. Lee Thompson, a director of muscular war films and Westerns, best known for The Guns of Navarone (1961), McKenna’s Gold (1968) and the excellent psycho-thriller Cape Fear (1962). By now, the more lavish budgets of the earlier films had been trimmed back somewhat and this is starting to show through – the ape makeups look cheaper. (The city of the future was economically conveyed by shooting on location in Los Angeles’s then new development of Century City).

Paul Dehn trims the cutesy humour of the previous films back altogether and goes for stark social conflict. Much of the violence had to be trimmed down in order to avoid an R-rating. Dehn construes Conquest of the Planet of the Apes as some kind of simian take on the Civil Rights movement of the 1960s – in particular, it seems as though he has gone and rewritten the Watts Riots with apes instead of African-Americans. (The film was hugely apparently popular among Black audiences when it came out).

Caesar’s impassioned final soliloquy contains some of the series finest writing and certainly Roddy McDowall’s best performance (even if the studio demanded that Caesar’s dialogue by redubbed for a more positive ending that transformed the idea of apes triumphant into Caesar insisting on humane coexistence). J. Lee Thompson seems to come into his element in staging the battle scenes at the climax.

That does not always disguise what is often a silly film at heart. There are moments of sloppy plotting such as Caesar’s faked death on the torture table. The cold totalitarian future is sparsely but effectively created, however its sociology is often patently ludicrous. It is difficult to believe that apes could perform such complex tasks, for instance. The anthropology that suggests that all apes need to do in order to talk, despite their lack of vocal chords, is simply have someone show them how is hokey.

J. Lee Thompson’s other films of genre interest are:– the classic revenge psycho-thriller Cape Fear (1962), the occult film Eye of the Devil (1967), the Communist China spy thriller The Chairman/The Most Dangerous Man in the World (1969), The Reincarnation of Peter Proud (1975), the Western The White Buffalo (1977) with Charles Bronson hunting a mythic buffalo, the slasher film Happy Birthday to Me (1981), 10 to Midnight (1983) with Charles Bronson vs a serial killer and the utterly dire adventure film King Solomon’s Mines (1985). J. Lee Thompson also co-wrote the scripts for the very strange psycho-thriller East of Piccadilly (1940).