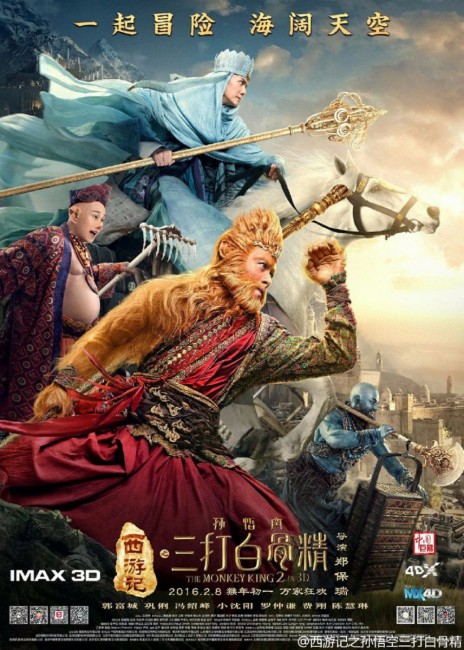 It is five hundred years since Sun Wukong, the Monkey King, caused mischief in Heaven. For this he was imprisoned underneath Five Elements Mountain. He is freed when the scholar Xuanzang, who has been tasked with transporting sacred scrolls to the west, seeks refuge from attack by a tiger. Sun Wukong immediately sets about to cause more mischief but finds that a headband has been placed on him by the Goddess, which binds him whenever Xuanzang chants. He is forced to accompany Xuanzang on his journey as penance. They are joined by the pig-faced Bajie and the blue-skinned Sha Wujung. However, they are watched by Baigujing, the demon known as Lady White Bone, who wants to consume Xuanzang’s life essence in order to gain immortality. As they journey onwards, she seeks to tempt them from their path so as to trap Xuanzang.

The Monkey King 2 is a sequel to The Monkey King (2014). This was another among the numerous adaptations of Journey to the West, the 16th Century epic legend that has become one of the great works of Chinese culture. (See below for the other adaptations). Starring Donnie Yen as the Monkey King, Sun Wukong, the film was a visually luscious work that showed the Chinese readily jumping aboard the modern CGI trend.

With The Monkey King 2, Donnie Yen, who apparently disliked being covered in makeup, has bowed out and been replaced by Aaron Kwok who played the nemeses of the Bull King Demon in the first film. While The Monkey King acted more as a prelude to the main story, The Monkey King 2 is directly based on the story of Journey to the West and introduces Xuanzang (also known as Tripitaka), the central character of the story, and the two companions. The film only tells one of the stories from the book, the battle with Baigujing, the White Bone Demon, who was one of more than thirty different nemeses that Monkey King fought throughout the story (the others presumably having been held back for further sequels).

If the first Monkey King was China latching onto the 3D and CGI visuals of Avatar (2009), then The Monkey King 2 feels like it is they jumping aboard the success of Man of Steel (2013) – Sun Wukong has now developed a Superman-like ability to fly through the sky at sound barrier-breaking speed, while slamming into the ground with physical impact. The film leaps into its superheroics within minutes, showing Sun Wukong engaged in battles with CGI tigers and sea monsters.

There are some dazzling set-pieces throughout – Aaron Kwok battling Gong Li in the forest where she appears as a billowing cloud of long white cloth; or her appearance in the throne room of the King of Yun Hai Xi, creating a forcefield that bends away arrows that are fired at her, stilling everything in motion and creating black tendrils that attacks guards and fill the room. Not to mention a climactic scene that starts off as a variant of the skeleton fight from Jason and the Argonauts (1963) and ends with Sun Wukong battling a massive torso of Gong Li comprised of skeletons. The end of the film also does a fairly good Obi-wan Kenobi sacrificial death during which director Soi Cheang takes every effort to pile on the emotion.

I had mixed feelings about The Monkey King but by the time of The Monkey King 2, which is altogether a far more confident film, returning director Soi Cheang has gained a huge assurance with the CGI, animation and digital realm. This is a film that is substantially made in an artificial environment and yet Soi has command of all the elements, creating something that flies with a genuinely fantastical flair. This is, if you like, the apotheosis of what lushly fantastical films of the latter days of the Hong Kong Wu Xia cycle such as Green Snake (1993) and Zu Warriors (2001) were aiming towards.