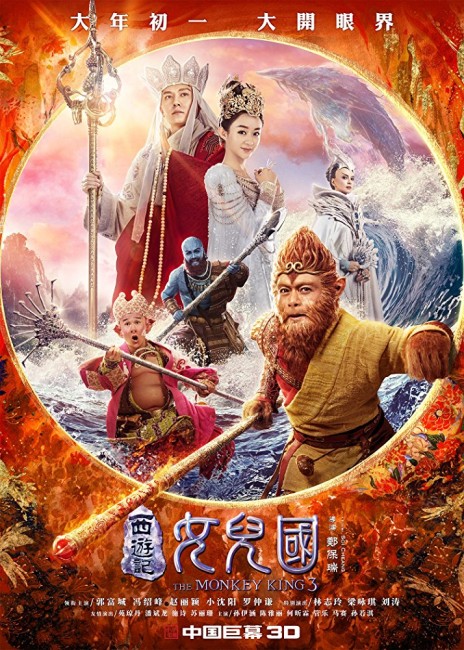 The scholar Xuanzang continues his journey to the West, accompanied by Sun Wukong, the Monkey King, and his companions, the pig-faced Bajie and the blue-skinned Sha Wujung. After an encounter in which they are pursued by a river god, Xuanzang meets and is enchanted by a beautiful girl who claims to have never seen a man before. They then discover that she is the queen of Womanland, a realm populated solely by women. However, the sacred texts the women abide by regard men as a poison that must be killed and the four of them are sentenced to death. The queen has become fond of Xuanzang and intervenes to ensure they are not killed but the men now find that a forcefield is preventing them from leaving the realm.

This was the third of The Monkey King films from director Pou Soi-Cheang. Pou began the series with The Monkey King (2014) starring Donnie Yen as Monkey and followed with The Monkey King 2 (2016) where Aaron Kwok took over the role, which he repeats here. The films are adapted from Journey to the West, the 16th Century epic legend that has become one of the great works of Chinese culture, telling the story of the scholar Xuanzang/Tripitaka and his various adventures as he journeys to India, accompanied by Sun Wukong, The Monkey King who has been banished to Earth by the gods for his mischief-making, and Monkey’s two companions. (See list of other adaptations of Journey to the West at the bottom of the page).

Watching Pou Soi-Cheang’s Monkey King films in order of their release, you can see how each takes a marked leap over its predecessor in terms of quality. They show Pou moving from a tentative adept to gaining a considerable mastery of the form in creating a wholly fantastique world that is just as much live-action as it is CGI without any real line between the two. With each successive film, Pou seems to push his assurance with the superheroics and the lushness of the design and costuming to a new level.

The Monkey King 3 takes this to an even further extreme. As with a number of recent Chinese-produced fantasy films – good examples being League of Gods (2016) and Time Raiders (2016) – The Monkey King 3 goes overboard on the lushness of the design and costuming to provide something that is almost an edible confection. You are stunned by some of the visions that Pou conjures – entire communities built alongside the riverbank; the queen of Womanland’s beautifully designed palace perched on the edge of a waterfall; a giant gateway standing in the middle of a river that opens into a verdant landscape; a library of scrolls where the sacred text is like a concertinaed panel fifty feet high that Zhao Liying has to jump up and down on a trampoline to read.

Pou creates extraordinary images – the opening scene where the party are pursued by a river monster and fly through the air, including trailing a raft with a horse on it behind them, before the Buddha intervenes from the heavens to create a forcefield to guide their landing and then their falling down a mountainside where William Feng meets Zhao Liying as both fall down together while upside down, before she lands and rides off standing atop an elk.

The downside of the film is that such amazing visions are tied up in a plot that trades in simplistic cliches. The theme of the men venturing into the woman-ruled world makes The Monkey King 3 no different from 1950s outer space sex fantasies such as Abbott and Costello Go to Mars (1953), Cat Women of the Moon (1953), Fire Maidens of Outer Space (1956), Queen of Outer Space (1958) and Missile to the Moon (1959). (The question of how a women-only world manages to repopulate itself is dealt with by the creation of a magic river that allows those that partake of its waters to become pregnant). The contrast of the men and women trades badly in the sexual stereotypes that run through Chinese cinema. The humour is frequently inane – a sequence that involves running around after a rogue page from the scrolls that taunts them in a squeaky voice; followed by a later sequence where the men all drink of the magic waters and become pregnant.