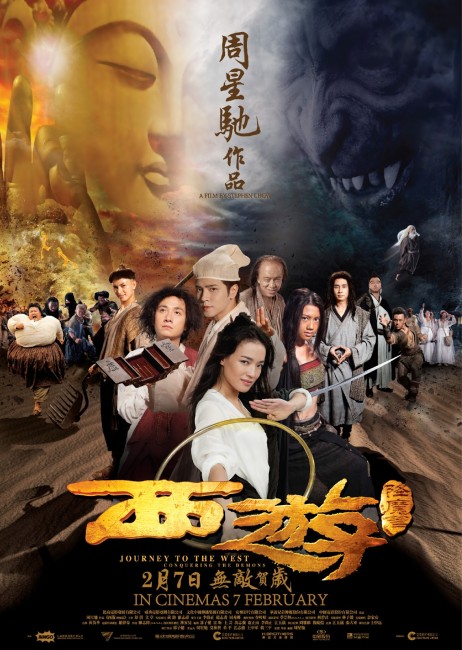 After a man is attacked by something in the river at a small village, Chen Xuan Zang appears and announces that he is a demon hunter and that there is a demon in the water. Various attempts are made to combat the water demon as it starts devouring villagers, until Miss Duan appears and effortlessly captures it, saying she is a real demon hunter and ridiculing Chen’s efforts to tame it with a copy of ‘300 Nursery Rhymes’. The two meet up again at the Gao Family Inn, a seemingly innocuous guesthouse where the pig demon K.L. Hog serves up cooked human flesh and slaughters all comers. Their attempts to capture the pig demon fail and they are forced to flee as it escapes. As Chen helps patch Miss Duan’s wound, she insists that he give her a kiss. Afterwards, realising that his demon hunting methods are inadequate, Chen Xuan Zang, on the advice of his master, sets out to Five Fingers Mountain to obtain the help of Sun Wukong, the imprisoned Monkey King. Miss Duan follows, having realised that she loves Chen. They and several other demon hunters compete to stop the rampage of the Pig Demon. Reaching the mountain, Chen inadvertently unleashes the Monkey King after five hundred years of imprisonment by the Buddha and they must face his wrath.

Stephen Chow emerged from Hong Kong television and as a star on the screen during the 1990s. It was however as director, writer and star of his own material that Chow became one of the top Hong Kong comedy talents. He made his debut as director with From Beijing with Love (1994), an hilariously funny spoof of the James Bond films and went onto the deliriously indescribable Forbidden City Cop (1996) and the likes of The God of Cookery (1996), The King of Comedy (1999), Shaolin Soccer (2001), which combined soccer with flying martial arts of the Wu Xia cycle, the international hit of Kung Fu Hustle (2004) and the children’s film CJ7 (2008), as well as producing Dragonball: Evolution (2009). Subsequent to this, Chow went onto make The Mermaid (2016).

Journey to the West is an epic Chinese tale that was written in the 16th Century and concerns the adventures of the scholar Xuanzang on a journey to India along with a band of companions that include the Monkey King. The story has been filmed a number of times before:- as the Japanese film Monkey Sun (1940); the Chinese animated Princess Iron Fan (1941); the Japanese film Songoku: The Road to the West/The Adventures of Sun Wu Hung (1959); the Japanese anime Alakazam the Great (1961); the Chinese animated film The Monkey King: Uproar in Heaven (1965), which is the best adaptation of the story to date; a trilogy of live-action films from Hong Kong’s Shaw Brothers Monkey Goes West (1966), Princess Iron Fan (1966) and The Cave of the Silken Web (1967); the popular the Japanese tv series Monkey (1978-9); a South Korean tv series Journey to the West (1982); a Japanese tv series Journey to the West (1993); a Japanese anime tv series Monkey Magic (1998); the US tv mini-series The Monkey King/The Lost Empire (2001) starring Thomas Gibson; the Hong Kong tv mini-series The Monkey King (2002); Jeffrey Lau’s A Chinese Tall Story (2005); a Japanese tv series Saiyuki (2006), which had one film spinoff with Saiyuki (2007); the US-made Jackie Chan/Jet Li vehicle The Forbidden Kingdom (2008); the modernised Emperor Visits the Hell (2012); while not long after this was the CGI-heavy The Monkey King (2014) starring Donnie Yen and its sequels The Monkey King 2 (2016) and The Monkey King 3 (2018) with Aaron Kwok; and the Chinese animated Monkey King: Hero is Back (2015).

I looked forward to Stephen Chow’s take on Journey to the West. (It should be noted that Chow himself had played the role of the Monkey King in the two-part film adaptation A Chinese Odyssey Part 1: Pandora’s Box (1994) and A Chinese Odyssey Part 2: Cinderella (1995) under director Jeffrey Lau). This version begins fantastically well from the opening scene set around a beautifully detailed riverside village with Wen Zhang’s hero battling a giant demon in the water. The sequence comes filled with typically Chow-esque comic set-pieces where a father’s attempts to amuse his daughter with his swimming exploits turns into his drowning, which continues to be applauded by the daughter, followed by the fights to stop the monster devouring villagers and dragging away the daughter, and then the comic attempts to land the demon by everybody jumping down onto the opposite end of a wooden beam on which the creature is beached to try and flip it onto land.

On the other hand, as Journey to the West: Conquering the Demons kicks in, the promise that one accords Stephen Chow as a fine comedy director on the basis of his other works soon peters out. Indeed, Journey to the West: Conquering the Demons promptly becomes Chow’s least effective work to date. The film’s routines never seem particularly inspired or fired up with any of the madcap creativity of his former films. Many of Chow’s typical comic targets – fun made of fat and/or ugly girls – start to become tiresome and insensitive.

Things come to life somewhat in the scenes with Wen Zhang abducted by Shu Qi’s comrades who conduct an elaborate charade to bring the two of them together. There are some classic Chow-esque moments here such as the Charm Spell going wrong or one of the team nonchalantly sitting down to have a conversation while his damaged metal collar still spurts jets of artificial blood. On the other hand, the turning of Shu Qi’s tough, assured demon hunter into little more than a lovelorn teenage girl pining away uncontrollably for the disinterested and inept Wen Zhang is one of the least convincing romantic pairings one has seen in some time, not to mention becomes badly sexist.

Journey to the West: Conquering the Demons progresses its way to a not terribly interesting ending. It climaxes on a big CGI battle as the various demon hunters take on the Monkey King (who is a much more sinister figure here than the mischievous trickster he is usually portrayed as). Still, there is nothing that comes anywhere near the amazing and inventive martial arts scenes that Stephen Chow directed in Kung Fu Hustle or the glorious visuals of Shaolin Soccer. There is nothing anywhere that holds any of the sublime wit and cleverness of From Beijing with Love or Forbidden City Cop. For that matter, the film is not even an adaptation of Journey to the West – it is more of a prequel to the saga where Chow and his co-writers have gone away and come up with their own story, before an epilogue where they are set aright by the Buddha and become the various companions as they set out on their journey to the west.

Journey to the West: Demon Chapter (2017) was a sequel directed by Tsui Hark.