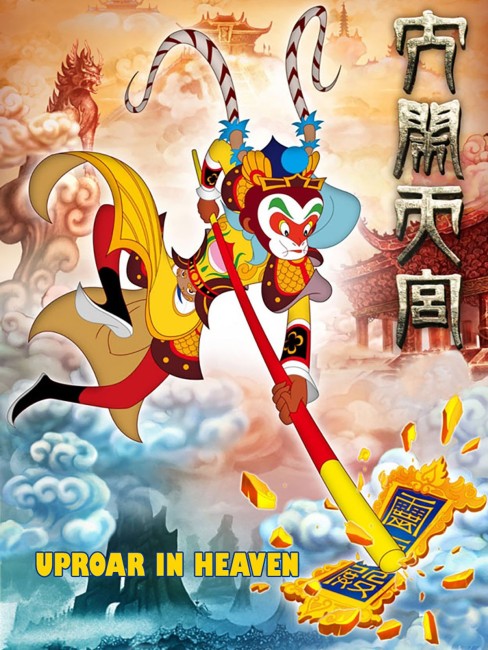 aka Havoc on Heaven

The mischievous Sun Wukong rules over the other monkeys on Peach Tree Mountain. After he breaks his sword, Sun Wukong sets out to find another weapon. His neighbour The Dragon King offers him the choice of any weapon from his armoury but Sun Wukong but cannot find one to his liking. He then finds the spear used by the gods to tame the oceans and claims this. This draws attention from the Emperor of the Heavens who summons Sun Wukong to him. They decide to give Sun Wukong the role of head of the imperial stables to placate him. However, much to the displeasure of the heavenly supervisor, he releases the horses. Sun Wukong then returns to Peach Tree Mountain and claims for himself the title of ‘Great Sage Equalling Heaven’. The Emperor of the Heavens decides Sun Wukong must be taught a lesson and sends his mightiest warriors, only for Sun Wukong to defeat them with his nimbleness and trickery. Sun Wukong is then lured back to Heaven with the promise of being made the head of the peach gardens. Instead, he eats all of the fabled peaches of immortality that only bloom every few thousand years and steals the food intended for empress’s banquet to take back to his monkeys on Peach Tree Mountain. This earns the wrath of the Emperor who sentences Sun Wukong to death.

The Monkey King: Uproar in Heaven is a classic Chinese animated film. It is an adaptation of the classic Chinese legend Journey to the West. The film was a production by brothers Wan Laiming and Wan Guchan, the acknowledged pioneers of the Chinese animation industry. The Wan brothers had previously adapted one of the stories from Journey to the West with the animated Princess Iron Fan (1941), which was the first ever feature-length animated film made in China.

The Monkey King: Uproar in Heaven had an uneven production history, being produced between 1954 and 1961, shown in shorter form in 1961 and the full-length version not unveiled until 1965. (Shortly after the film was released, the Wan Brothers’ studio was shut down by the Cultural Revolution). The Monkey King: Uproar in Heaven has not been widely seen in English-speaking countries, it having never been released in the US and not officially dubbed or subtitled into English until this 2012 rerelease.

This is the best of the adaptations of the legend to have graced the screen so far. Certainly, its telling of Journey to the West was overshadowed during this era by the more popular anime version Alakazam the Great, even though that was badly butchered in its English-language version to the point that the original story was unintelligible. The Monkey King is by far the superior film in every regard – in offering a much more authentic telling of Journey to the West and in terms of the epic quality of the animation.

There has been an enormous quality of animation that has been afforded to the film (at least, in terms of what were the boundaries of the form for the era). The film comes in an eye-popping range of colours and is directed with an enormous degree of energy. It takes a little time for one to get used to it but as soon as the action scenes kick in, the film is fast paced. The scenes with Monkey King fighting various opponents, outwitting the forces of Heaven and running amok, all the while giving a gleeful giggle of mischief, are psychedelically eye-popping. (Indeed, this is a film that one suspects would instantly become a whole lot more enjoyable when seen ‘under the influence’). The battle scenes contain some of the most epic animation that this era ever produced. The climactic scenes with Monkey King and opponent changing into a variety of animal forms at lightning speed are far superior to the similar ones that take place in the Disney film of this period The Sword in the Stone (1963).

One of the most intriguing things about The Monkey King: Uproar in Heaven is trying to read it in terms of subtext. In terms of a character, Monkey King is the ultimate version of the Trickster archetype – the eternal adolescent who refuses to come under the yolk of authority, delights in perpetual mischief and is constantly blowing a raspberry in the direction of all efforts to reign him in. To this extent, the entire film is almost a single-mindedly gleeful celebration of the spirit of anarchism with Monkey King outwitting and defying anything the heavenly bureaucracy tells him to do or their attempts to pacify and subdue him.

When you consider that the film was made at the height of Chairman Mao’s Communist regime, this theme of standing up in favour of individuality and of outwitting and defying authority becomes even more remarkable. Of course, how the producers of The Monkey King managed to get away with it was to portray the authorities being defied as a traditional Chinese Emperor and his lumbering bureaucracy. However, this is even more of a subversion and outwitting of authority on the filmmaker’s part – in exactly the same way that the heavenly bureaucracy in the film is constantly handing Monkey King stations that mean nothing but sound impressive, they have handed the Communist authorities a work that appears to take a stand against the traditional Imperial Chinese past but in fact gleefully celebrates individualism and defiance of any system.

The Monkey King: Uproar in Heaven was not seen in the West for many years. It was however given an elaborate reconstruction and rerelease in 2012. Here the original print was digitally restored, given brand new subtitling and most importantly the entire film reconstructed in 3D. This does however lead to some incongruities. The animation is down around the typical level of anime of the era – shows like Astro Boy (1963-6) and so on – where backgrounds are static, characters are relatively simplistically drawn and not many elements in the frame move. This has been retained and not altered in any way but it looks decidedly odd watching a traditional 1960s animated film being projected in 3D with multiple planes of movement. It makes one wonder what audience the restoration is intended for. It certainly brings back a fascinating artefact but it is hard to think that a traditionally drawn film, lacking much of the depth and roundeness of modern animation, let alone one that is subtitled, would have much crossover potential for modern children’s audiences.