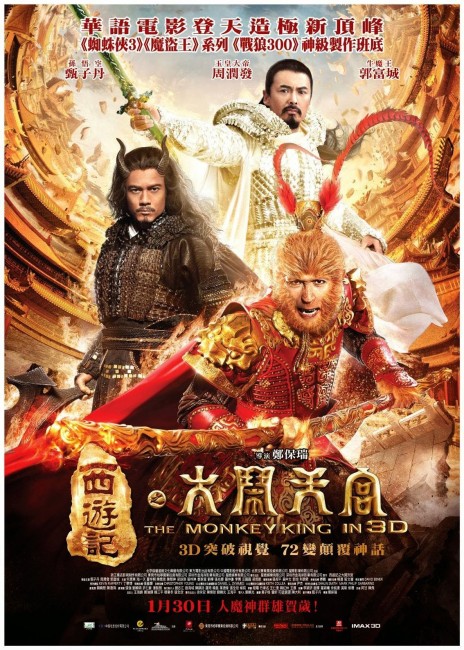 The Bull Demon King challenges Heaven with his army in an attempt to overthrow the Jade Emperor and take the throne but is defeated. The Jade Emperor prepares to destroy the Bull King Demon but Princess Iron Fan pleads for mercy on the grounds that the two of them be allowed to seek love together. The Jade Emperor relents but bars the Bull King Demon from Heaven forever. The goddess of luck Guanyin gives her life to build impenetrable crystal defences to defend Heaven. A shard from her body falls to Earth and gives birth to a monkey. Growing up, the mischievous monkey becomes the king of Huaguo Mountain. The monkey is sent to Master Puti to learn to fight where he is given the name Sun Wukong and discovers he has great abilities. The Bull Demon King seeks to use Sun Wukong in his revenge against Heaven. He persuades Sun Wukong to claim the title Sage Equalling Heaven and then go and challenge his way through the gates. Inside Heaven, the Jade Emperor is amused by Sun Wukong and places him charge of the stables. However, due to the Bull Demon King’s manipulations, which are aided by the traitorous heavenly guard Erlangshen, Sun Wukong proceeds to create mischief and havoc throughout Heaven.

The story of Sun Wukong the Monkey King, as told in Journey to the West, is one of the great cultural legends of the world. Journey to the West was written in China sometime in the 16th Century where the author is generally attributed as being Wu Cheng En. The story concerns a pilgrimage to India undertaken by the scholar Xuanzang. He is accompanied by several companions – the mischievous trickster Monkey King, the half-human, half-porcine Pigsy and the monk Friar Sand – who undergo various adventures and encounter fantastical creatures along the journey. (Journey to the West has been filmed numerous times before – see below).

The Monkey King is a new version of the Monkey King legend. (It notedly came out eleven months after the Stephen Chow Journey to the West: Conquering the Demons (2013), which it should be noted portrayed the Monkey King as an altogether more sinister figure) and several months before another Chinese animated version Monkey King: Hero is Back (2015).

The film comes out amid the great renaissance in lush, well-produced Wu Xia cinema that has been produced by China in the late 2000s, following successes such as Hero (2002) and House of Flying Daggers (2004). The Chinese Wu Xia films of the 2000s and beyond have been cautious and occasionally inventive about leaping aboard the CGI bandwagon but The Monkey King does so with alacrity to the extent that it emerges as something akin to a flying swordsman fantasy film reimagined by way of Avatar (2009).

It is an amazingly colourful world that the film creates, filled with images of the casually fantastic and all seemingly designed for the 3D camera – this is a film where, for instance, people seem to fly more so than they ever walk. Little of the film takes place in the real world, almost every set is a digital one with backgrounds seemingly airbrushed and colours saturated to resemble something akin to classical Chinese religious ornamentation that drips with the most exquisite golds, reds and blues. The opening moments alone spill over with visions of armies in a vast phalanx in the sky being blown apart, dragon transformations and battles between gods and demons.

The most colourful sequence is the visit to the underwater realm of the Dragon King, which is filled with crab ministers, girls wearing oyster shells, giant octopi and all manner of sea life. The film builds to a colossal climactic battle filled with combatants throwing about power blasts, massive energy discharges and fighting in mid-air in between flying chunks of masonry as Heaven is blown apart, with the Jade Emperor changed into a dragon, the Bull Demon King battling while transformed into a creature of smoke and Sun Wukong into a giant ape that resembles King Kong. It is all rather enjoyable eye candy.

In terms of the elements of Journey to the West it focuses on, this version fairly closely follows the plot of The Monkey King: Uproar in Heaven (1965). The major addition is the character of Aaron Kwok as the Bull Demon King whose machinations and desire to usurp the throne of Heaven provide much of the plot impetus. Donnie Yen, his pretty HK matinee idol looks unrecognisable behind full makeup as the Monkey King, gives us a spiritedly perky and mischievous performance.