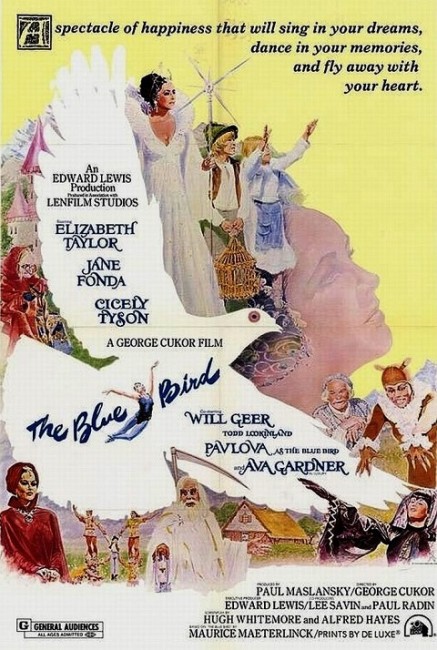 Young Tyltyl and Mytyl go to sleep and share a dream in which they are greeted by the personification of Light who shows them how to see the ordinary things around them as beings. She sends the children on a quest to find the blue bird that is needed to bring happiness to a young girl who is ill. Their journey takes them through the afterlife where they meet their grandparents again, to the land of Night, the seductions of Luxury, the land of trees and into the world of children waiting to be born.

The Blue Bird (1908) was a play from Belgian author Maurice Maeterlinck. It was intended as an allegorical fairytale concerning two children and their quest for the fabled Blue Bird of Happiness. This has been filmed a number of times, including two silent versions, The Blue Bird (1910) and The Blue Bird (1918), and most famously with the Hollywood version The Blue Bird (1940) starring Shirley Temple.

With such a long list of classics to his name, it is hard to understand what went wrong for Cukor with The Blue Bird. It could simply have been that he was seventy-six years old at the time and losing his acuity. Whatever the case, the film is a staggeringly bad embarrassment. Producer Paul Maslansky, who is probably most famous subsequently for the inane Police Academy series, managed to get a host of star names to sign on and took them to shoot in Russia. Alas, this proved to be a production that dragged on and on.

Up on screen, the result feels like a high-school pantomime made by amateurs with no filmmaking skill. Crucially, it is a work that creates no suspension of disbelief. The choreography of the dance in the first few scenes with people cavorting around the wooden cabin is leaden – as though an amateur videographer had simply pointed the camera at people rehearsing.

Playing young Mytyl is an eight year-old Patsy Kensit. Knowing Kensit from her work as an adult actress in films such as Absolute Beginners (1986) and Lethal Weapon 2 (1990), it is rather of a disconnect seeing her here as a child smiling through gaps in her teeth. Top-lined is Elizabeth Taylor who looks as though she is trying to hold back an uncomfortable cringe at the absurdity of some of the dialogue she has to utter, particularly during her first appearance as Light. Even more embarrassing is surely George Cole, later to the co-star of tv’s Minder (1979-94), who spends the entire time frolicking about dressed in a dog suit.

Even if you haven’t seen the 1940 film or know the Maurice Maeterlinck story, this seems a plodding adaptation that drags on seemingly forever. It seems so muddled it is hard to tell what is going on. The film is clearly an allegory and the characters are playing parts that are symbolic of virtues but it is almost impossible to tell what meaning they are intended to hold. Where it should have had a frothy sugary uplift like say The Wizard of Oz (1939), this grinds its way to an indifferent conclusion and provides zero charm or whimsy in any way.