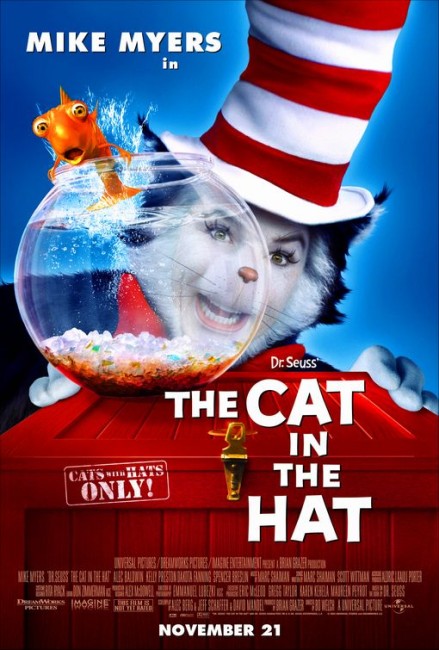 Joan Walden leaves her two children, the rule-breaking Conrad and the control freak Sally, at home while she goes to work. She gives them strict warnings that they are not to mess anything up, especially the living room, because that evening she is holding a party for her boss who is a cleanliness fanatic prone to firing people on the slimmest pretext. After the babysitter goes to sleep, the children are startled by the appearance of a large talking cat. The cat gets them to join in all manner of fun but this soon causes complete chaos. As they try to get the mess cleaned up before their mother returns, the dog escapes and their mother’s neighbouring boyfriend Larry Quinn goes to get it back, determined to use this as proof of Conrad’s irresponsibility and have him sent to military academy. Meanwhile, Conrad has opened the cat’s crate and unless they get back the lock, which has attached itself to the dog’s collar, the crate will burst open, creating the mother of all messes.

This live-action version of The Cat in the Hat opened in November 2003 to some astonishingly bad reviews. These were capped off by The Cat in the Hat‘s receiving eight nominations in the ten possible categories at the 2003 Golden Raspberries Awards. (It was beaten in a clean sweep by the Ben Affleck-Jennifer Lopez romantic comedy Gigli (2003), although did win in the category of ‘Worst Concept for an Actual Movie’).

Getting around to watching the film five months later, there is the burning question at the forefront of one’s mind – is The Cat in the Hat as bad as everybody says it is? The answer is ‘not quite’ – there are far worse films out there – why didn’t Lara Croft, Tomb Raider: The Cradle of Life (2003) get nominated in the Razzies the same year, one wonders? On the other hand, The Cat in the Hat is not a particularly great film either.

The script remains faithful to the basics of the Dr Seuss story – the cat that invades the house where the children are left alone and causes anarchy, the appearances of the talking goldfish and the two Things, and the frantic need to clean the chaos up before the children’s mother returns. To the film’s credit, Dr Seuss did not give them much to work with in the first place. There was nothing to the story beyond the basic set-up – no explanation of the cat or anything. The film invents a sort-of explanation – about the cat coming from another dimension – and expands the basic chaos out by adding a villain and the need for a chase – to get back the dog and the lock to the crate – and strengthens the reasons for having to clean the mess up – threat of being sent to military academy, the mother hosting a party for a obsessive-compulsive boss.

That said, the backstory and the reasons for things happening that the film adds are rather slim. One amusing addition is the presence of a babysitter, the need for which never entered Dr Seuss’s mind apparently. However, such a by-implication potentially irresponsible move of having two children left home alone by their parents would not do in today’s world so the film adds a babysitter, although quickly puts her out of the action soon in the show.

Imagine Entertainment have handed direction over to Bo Welch. Welch had previously directed episodes of various tv series but The Cat in the Hat was his big screen debut (and only film to date). Welch however is best known as a production designer and has designed some highly impressive and distinctive sets on several Tim Burton films, including Beetlejuice (1988), Edward Scissorhands (1990) and Batman Returns (1992).

In many ways, The Cat in the Hat is almost entirely a production designer’s film. Indeed the world that Bo Welch creates could easily be an extension of the suburbia that he created for Tim Burton in Edward Scissorhands – all identical stylised picket fences houses and pastel-coloured costumery. The film often feels like one where Bo Welch is letting the production designer side of himself go nuts, continually piling on gonzo Willy Wonka-styled absurdist nonsense – wacky cars and a potentially imaginative sequence where the house goes through a dimensional warp and comes out like a madcap cubist painting.

In concept, there is not much to the film other than turning Dr Seuss’s story into a giant nonsensical fairground ride combined with a mud pie and crazy goo fight. The film rarely ever dances with Seuss’s play of words; rather it degenerates into a tedious and nonsensical free-for-all game of Simon Says. As such, it is strictly average. It is not truly execrable – as to how disastrously the film could have gone wrong see Drop Dead Fred (1991).

The big minus about the film though is Mike Myers. Myers can be a very funny guy when he has the right material – see Austin Powers: The Spy Who Shagged Me (1999). However, he also likes to preen in front of and play to the camera. Myers’ fame has become such that he can now exert influence over the material he appears in and as result he has come to increasingly dominate his films to the exclusion of all else – see Austin Powers in Goldmember (2002). The film indulges Myers in a bad way – he playing multiple versions of the cat and frequently turning to the screen to make jokes and/or break down the fourth wall. One wishes that Imagine had chosen a director who at least had the ability to stand up to and restrain Myers.

(Nominee for Best Production Design at this site’s Best of 2003 Awards).