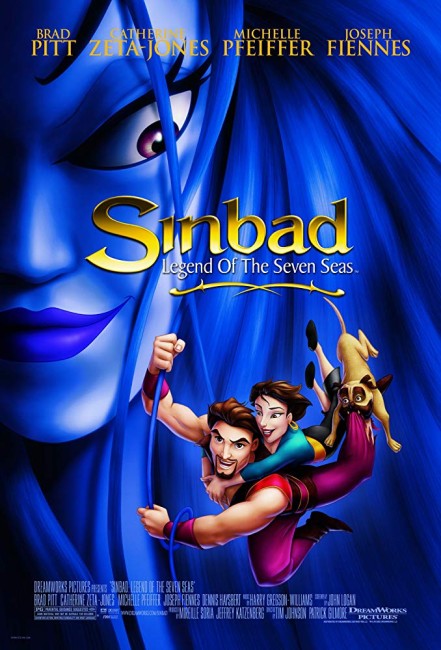 Sinbad the pirate attempts to raid a ship that is carrying the Book of Life to Syracuse, only to find that the ship is captained by his old friend Proteus. A monster then attacks the ship and Sinbad is thrown overboard. Sinbad is rescued by Eris, the goddess of chaos, who tells him that she wants him to steal The Book of Life for her. When Sinbad dallies in Syracuse, Eris appears, takes Sinbad’s form and steals The Book. Sinbad is promptly arrested but his cries of innocence are not believed, except by Proteus who offers to allow himself to be executed in his old friend’s place. Sinbad is given the opportunity to retrieve the Book. He sets sail with the intention of fleeing of Fiji but is persuaded otherwise by Marina, Proteus’s ex, who has stowed away abroad. A grudging attraction grows between Sinbad and Marina as they follow the trail of the Book to the Gates of Tartarus at the edge of the world, all along the way having to face the treacheries that Eris throws at them.

Despite promise shown by DreamWorks’ otherwise above-average animated films, there is an infuriating blandness to Sinbad: Legend of the Seven Seas. Sinbad marshals all the elements for success – the animation is of a high quality and comes without the self-conscious artiness of many recent Disney films; the story sets up an epic adventure; it casts a roguish hero opposite a perkily self-confident female lead and has both voiced by two popular box-office stars (Brad Pitt and Catherine Zeta-Jones).

Only the combined effort feels like a film that skips through the moves without ever pausing to engage its audience. The animation is only ever directed as a series of self-contained set-pieces – the initial pirate raid and the attack of the Cetus monster; the flight from the roc by tobogganing on a shield; the ship surfing behind another sea monster; and a worthwhile sequence where they navigate a ship’s graveyard haunted by sirens.

The character arcs, although capably invigorated, seem utterly predictable – despite setting Sinbad up as a rogue, there is no doubt from the outset that he is going to be redeemed and what choice he will make between facing his responsibilities or not; and, despite Marina’s divide between two men in her life, the outcome of the love triangle is never in doubt for a single second. There is the magical equivalent of a Hitchcockian McGuffin – the Book of Life – but this is so vague and generic a mystical artifact that we are not even sure what it is meant to do for the five cities.

A large part of the problem here might be the inauspicious presence of John Logan on the script. Logan had a big promotion with the Oscar-nominated script for Gladiator (2000) (which is now revealed as having been heavily rewritten by William Nicholson). Since such a boost, Logan has revealed himself to be a hack with little grasp of the screenwriting craft and has laid a trail of devastation through the genre with his scripts for The Time Machine (2002) and Star Trek: Nemesis (2002), although did at least prove himself again with the script for The Aviator (2004), as well as creating the tv series Penny Dreadful (2014-6).

Even more so than its flaccid and predictable story, what is unmistakeably noticeable about Sinbad: Legend of the Seven Seas is how far it goes to avoid any connection to the Arabic origins of the Sinbad story (which first emerged in later versions of the The Arabian Nights circa the 14th Century). It is as though the filmmakers were being so sensitive to the presumed post-9/11 national American trauma that they didn’t want to include anything that was even vaguely Arabic or Islamic in nature. Among the mixed ethnic cast of Sinbad’s crew, there is not even a single person with vaguely Arabic features. There are not even any of the usual pseudo-Arabian Nights elements of the various Sinbad films – evil viziers, princesses in peril, flying carpets, genies.

Even more intriguingly, the implied religious backdrop of Arabian Nights – Islamic monotheism – has been entirely deleted in favour of a pseudo-Grecian pantheon and cosmology. Eris is not an actual Greek god, although she appears to have been closely modelled on the three Moirae or Fates – Clotho, Lachesis and Atropos – from Greek mythology, while the post-Copernican cosmology of Islam has been turned back into a Ptolmaic flat Earth with a canopy of the zodiac. [Although to be fair, the mixing of Sinbad and Greek mythology was first conducted in various regards by Ray Harryhausen in The 7th Voyage of Sinbad (1958) and The Golden Voyage of Sinbad (1973)].

The setting is also decidedly confused – the locale is supposedly Syracuse (which was located in Sicily), while the time period is screwed up by references to Fiji, which was not discovered until the 18th Century and is just a little too late for the Greek-Arabic exploration of the world. It is hard to think of another adaptation of a classic legend that goes to such effort to divorce itself from the cultural background of the story it came from.