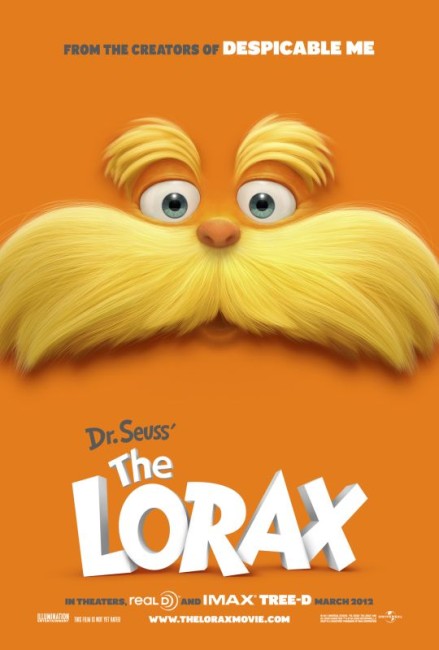 The town of Thneedville is ruled by the entrepreneur O’Hare who has replaced everything natural with plastic. Young Ted likes Audrey and discovers that she has painted trees in her backyard. After Audrey says she would marry anybody who brings her a real tree, Ted sets out to find one. His grandmother advises him to leave town and find The Once-ler. Ted ventures into the desolate area outside Thneedville and encounters the reclusive Once-ler. The Once-ler tells Ted his story – how he set out to make his fortune by discovering Thneeds and came to the valley, which was inhabited by bears and fish. After cutting down a tree to make his Thneed, he was visited by the valley’s guardian spirit, a strange creature known as The Lorax, who made him promise to never cut down any more trees. However, as The Once-ler found success selling Thneeds made from the foliage of the trees, the demands of the production process meant he was forced to cut down all the trees in the valley, eventually devastating the area. As The Once-ler offers Ted the chance to plant a seed to save the valley, O’Hare makes all effort to stop Ted from doing so.

Illumination Entertainment made an impressive debut a couple of years prior to this with the charming and delightful Despicable Me (2010). This announced them as a major new player on the animation scene and they subsequently went on to a mix of live-action and animation with the lame Hop (2011) and subsequent to this Despicable Me 2 (2013), Minions (2015), The Secret Life of Pets (2016), Sing (2016), Despicable Me 3 (2017), The Grinch (2018) and The Secret Life of Pets 2 (2019). For their third film, their second fully animated film, they turned to this Dr. Seuss adaptation.

Dr. Seuss (1904-91), born Theodore Seuss Geisel, was arguably the foremost American children’s writer. Throughout his career, which began as a cartoonist and included a stint writing propaganda films for the war effort during the 1940s, Dr. Seuss is most known for his children’s books, which come with a distinctive nonsense rhyming style based around the repetition of simple words. The 46 books that Dr. Seuss produced include classics such as Horton Hears a Who! (1955), The Cat in the Hat (1957), How the Grinch Stole Christmas (1957) and Green Eggs and Ham (1960).

Since the 00s, Dr. Seuss’s works have been popular as feature-length cinematic properties. All versions prior to that had been short films that were produced as tv specials – the sole exception being the live-action film The 5000 Fingers of Dr T (1953), which was made from an original Dr. Seuss screenplay, although this was a financial flop in its day. This modern spate of Dr. Seuss films began with Ron Howard’s big-budget production of How the Grinch Stole Christmas (2000) and was followed by a live-action version of The Cat in the Hat (2003). Blue Sky Studios next made an animated version of Horton Hears a Who! (2008), on which The Lorax‘s director Chris Renaud was employed on as a story artist. Illumination subsequently returned to Dr Seuss with their remake of The Grinch (2018).

The problem with these Dr. Seuss adaptations is that they are required to extend books of around 50-60 illustrated pages out to a feature-length film. Dr. Seuss’s stories were founded around his absurdist illustrations and nonsense rhymes. In being required to stretch these out to 90 minutes worth of story, the films tend to fall back on using the formula of the animated/children’s movie to pad the story – thus the child protagonists are brought to the fore and written with a far greater degree of maudlin cuteness; there is far more of a happy feelgood message that Dr. Seuss never went for; minor pieces of background becomes full blown set-pieces; and in the case of The Cat in the Hat, the entire story is blown up into a equivalent of a custard pie fight. Here the Dr. Seuss story is extruded out with the addition of a big climactic chase to preserve the seed as the corporate bad guys attempt to obtain it.

Certainly, you have to commend The Lorax as the film follows the path of the original story closely on all points bar the addition of a few minor supporting characters on the sideline. This does mean that Dr. Seuss’s original pro-environmental message is laid on with a trowel. Indeed, the film amplifies this to an extent where almost everything is divided along rigid black-and-white lines – evil is represented by a city where everything is plastic and artificial and a corporation rules with a paranoid and intrusive iron hand, while on the side of good is the open countryside where animals and fish are allowed to frolic in freedom and trees grow in peace.

As a rule, I am in favour of an environmental message but the film seems to overstate the issue with a cudgel – even to the extent of including songs about it on the soundtrack. Although such would well appear to have been Dr. Seuss’s original intent and the original The Lorax (1971) book attained some controversy from the pro-logging movement when it came out.

There is an amiable niceness to The Lorax up on screen but the film never moves outside of the formula of the animated children’s movie. As such, it is down around the level of the average Blue Sky Studios film – cute but still trying too hard to find what Pixar used to do effortlessly. What seems to be lacking here are the charms and appeals that there were to Illumination’s Despicable Me. Danny DeVito turns up to voice the role of The Lorax but the character seems surprisingly cuddly, middle of the road and unmemorable, especially given DeVito’s history of eccentric roles that hold a malicious bite. There is slightly more in the way of scene stealing cuteness when it comes to the bears and fish that inhabit the valley, although the rest of the film passes into no more than routine formula.