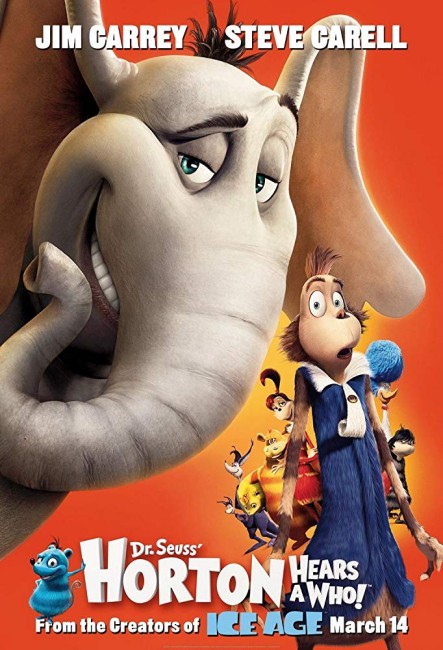 In the jungle of Nool, Horton the elephant is having a bath when a speck of dust blows past him and he hears a voice faintly crying from it. He chases after the speck and rescues it as it settles on a clover. He realizes that the speck of dust is an entire world inhabited by a race of people. Horton’s voice is able to be heard by Ned McDodd, the mayor of Whoville, because it is amplified through the arrangement of pipes on his house, while Horton is the only one able to hear Ned because of his large ears. Horton’s claim to having a speck of dust with people living on it is ridiculed by a sour kangaroo who insists that the animals only believe in what they can see, hear and feel. When others children start imitating Horton, the sour kangaroo determines to destroy the clover. At the same time, Ned realizes that chaos is being caused in Whoville because the clover is being moved around. His claims to be hearing Horton’s voice are ridiculed by the members of the council who regard him as a boob because they are determined that nothing ever goes wrong in Whoville. Horton attempts to carry the clover to a place of safety atop Mount Nool but the kangaroo has hired the vulture Vlad to destroy the clover.

In the last few years, the visual effects company Blue Sky Studios has transformed into a CGI animation company and started to give Pixar and others a run for their money in terms of competing for the increasingly more lucrative animation box-office dollar. Blue Sky Studios first appeared with the successful Ice Age (2002) and then went onto Robots (2005), Ice Age 2 (2006), Ice Age 3: Dawn of the Dinosaurs (2009), Rio (2011), Ice Age: Continental Drift (2012), Epic (2013), Rio 2 (2014), The Peanuts Movie (2015), Ice Age: Collision Course (2016), Ferdinand (2017) and Spies in Disguise (2019). Blue Sky’s animated films have yet to win them the endearing love that each new Pixar film is greeted with – they still seem stuck down at the level of earnest Pixar wannabes. Certainly, Horton Hears a Who!, their fourth feature-length film, was their most successful film up to that point and opened at the No 1 spot at the box-office in almost every country around the world.

For Horton Hears a Who!, Blue Sky have turned to one of the children’s books of Dr Seuss. Dr Seuss published Horton Hears a Who! in 1954 – it was a sequel to an earlier Seuss work Horton Hatches an Egg (1940), wherein the title elephant is ridiculed for agreeing to sit in a tree and mind a bird’s nest while its mother take a leave of absence. Horton Hears a Who! is an interestingly political work where Dr Seuss is said to have based the character of the sour kangaroo and her crusade against ideological correctness on Senator Joseph McCarthy who ran a campaign to purge suspected Communist sympathisers from the US government in the 1950s. There was also some controversy in the 1980s when Horton’s catchphrase “a person’s a person, no matter how small” was appropriated by the Right to Life movement, something that was fiercely denounced by Dr Seuss’s widow.

Dr Seuss’s work has fared variably on the big screen. In recent years, there have been a spate of live-action Dr Seuss adaptations with How the Grinch Stole Christmas (2000) and The Cat in the Hat (2003) but both of these ended up being hated – they alternately drowning Seuss’s nonsense humour and wordplay in over-production, noisy slapstick and icky substances fights. Aside from various animated specials produced for tv, the best Dr Seuss adaptation has been the original film treatment he wrote himself The 5000 Fingers of Dr T (1953). There was an earlier half-hour animated adaptation Horton Hears a Who! (1970) from director Chuck Jones who had also made the classic animated version of Dr Seuss’s How the Grinch Stole Christmas (1966). Subsequent to this, there were also a feature-length animated adaptations made of The Lorax (2012) and The Grinch (2018).

The problem with most of these modern Dr Seuss adaptations, Horton Hears a Who! included, is that they are caught between two extremes that do not match. One of these is the world of Dr Seuss with its nonsensical absurdism, where elephants can sit in bird’s nests, cats in hats can appear and turn the world upside down, trees have fur and can talk and nobody seems to regard this as odd. Each story is told in a series of rhymes that makes a dizzying play between a limited series of repeated words, while the artwork and background design comes in a wacky style that refuses to follow any kind of straight line.

At the other extreme is the world of contemporary animation and children’s films, which are dominated less by absurdism and wacky rhymes as they are by slapstick capers, safe moral messages and upbeat wrap-ups, and where the humour tends to centre around references to contemporary pop culture, smartass one-liners and poop jokes. That the most Dr Seuss-like all of these films get is only visually – the replication of his designs – is no particular surprise, this aspect being the easiest to imitate.

Horton Hears a Who! emerges better than How the Grinch Stole Christmas and The Cat in the Hat, although the rub is ultimately that Horton Hears a Who! feels more of a film that follows the formula of the modern animated film than it truly does an adaptation of a Dr Seuss book. Blue Sky wheel out all the standards of the modern animated film. There is an engaging and amiable series of talking characters, including cute sidekicks, a neglected child who reconciles with their parent at the end, various villains and their comic sidekicks. (Surprisingly amid this, Jim Carrey, voicing the role of Horton, seems to work far more appealingly when playing an animated character than his antics do in live-action). There are a number of moral points – people taking a stance against enforced ideological points-of-view, even the view that it is okay to believe in things you cannot see, hear or touch ie. have faith. And it is all laid over with a good deal of slapstick comedy.

But it isn’t Dr Seuss. Dr Seuss’s book might take about fifteen minutes to read aloud as a bedtime story; here this has been overextended into a feature film. Blue Sky people the background of the film with familiar characters from other Dr Seuss works. However, there is the incessant need that runs through much of modern animation and children’s fantasy cinema to keep puncturing the suspension of disbelief with characters’ making reference to pop culture or delivering smartass one-liners.

Horton Hears a Who! cannot seem to avoid getting trapped here, making references to films like The Thing from Another World (1951) and Apocalypse Now (1979) – although one wonders what kids are possibly going to pick up on these – as well as featuring songs and even a Whoville version of MySpace. Not to mention a silly sequence where Horton imagines himself as the hero in an anime pastiche that feels like it was a cute bit the Blue Sky animators slung together in their spare time and could not bear to throw it out, even though it belongs on the cutting room floor. This never becomes as intrusive as it does in some films like Ella Enchanted (2004), Shrek 2 (2004), Hoodwinked! (2005) or Underdog (2007), which seem driven by a modern cynicism that holds any notion that children suspend their disbelief in disdain. However, it is sad to see as you know that Dr Seuss would never have lowered himself to doing these things.

In the end, Horton Hears a Who! is an amiable effort. The characters and their journey work likeably, the film plays its humour warmly and not too untoward, and there is a strong message about holding to one’s beliefs against a tide of dogmatic conformity. The production designers have fun replicating the zaniness of Dr Seuss’s worlds and turning Whoville into a madcap landscape of rickety houses with over-exaggerated twists and curls. There are even some scenes that are quite lovely – like where the vulture drops the clover and Horton faces the heartbreaking prospect of having to search for it in a field of pink clovers that stretches to the horizon. Plus how can one dislike a film that features the yellow-furred little girl character of indeterminate species who carries her own clover and insists that it has a world inhabited by ponies that eat rainbows and poop butterflies?