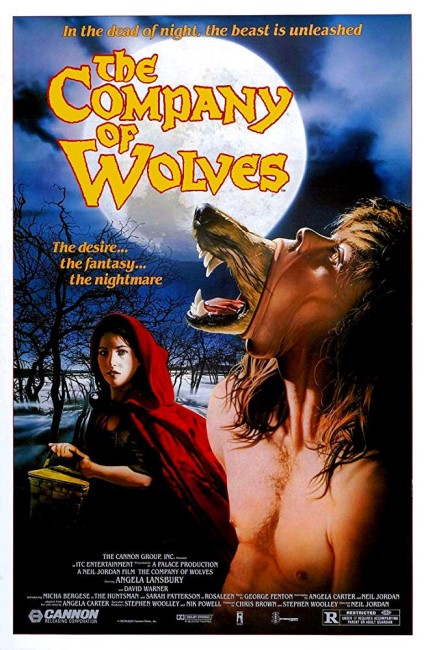 Thirteen-year old Rosaleen lies in her room, dreaming that she is in a 19th Century village. There her grandmother warns her to never trust a man whose eyebrows meet in the middle and to be wary, not of the wolves that haunt the forest, but of the men who are hairy on the inside. But after walking in the forest with a young boy, Rosaleen is tempted aside by a handsome huntsman whose eyebrows meet in the middle.

Angela Carter was an intriguing writer who developed a reasonable following. Almost all of Angela Carter’s fiction fell within the fantasy genre. In her work, Carter deconstructed classic fantasy themes through a net of feminism, literary criticism and Freudian theory. In particular, Carter is known for her attempts to deconstruct fairytales in terms of adult meaning and to bring out an underlying Freudian subtext. Carter devoted a short collection to these modernised fairytales with The Bloody Chamber (1979), which includes the story from which The Company of Wolves has been taken where Carter deconstructs Little Red Riding Hood.

The Company of Wolves came at a point when several other films in the early 1980s – most famously The Howling (1980) and An American Werewolf in London (1981) – were deconstructing and reinterpreting the werewolf myth and most notably were infusing the old lap dissolve transformations with extraordinary real-time air bladder transformation effects. While these other films did little more than make a joke out of transplanting the werewolf into the modern day or in maniacally quoting from other werewolf films, The Company of Wolves, as might be expected when you mix a writer of Angela Carter’s calibre with a then emergent Neil Jordan, emerges with a genuine conceptual dazzle.

There is no linear story to The Company of Wolves; rather the film is a series of vignettes and dreams within dreams, all of which parse the fairytale away to a probable origin point amid old wives tales and folk superstition. Here Angela Carter creates an amazing swim of metaphors where lycanthropy is made to stand in for everything from burgeoning sexuality to fear of men.

For Carter, Little Red Riding Hood represents nascent female sexuality. The red hood appears as a symbol of menstruation and Rosaleen’s path through the forest is seen as an allegoric path of virtue. When Rosaleen does stray from the path it is into sex and temptation – the first thing she finds off the trail is a bird’s nest in a tree, which leads to the discovery of lipstick. Correspondingly, the werewolf is seen as virility and male sexuality. (Certainly, Carter swings her metaphors widely – in the flashback to the squire’s marriage feast, the wolf is seen as a symbol for selfish human nature emerging through guilt and hypocrisy).

Where many other films would have climaxed with the killing of the wolf, Carter instead sees the need for reconciliation between male and female sexuality and the film’s resolution is the revelation of the grandmother’s advice to be symbolically hollow and Rosaleen’s discovering of the tenderness of the wolf.

Christopher Tucker’s transformation effects are exceptional. The earlier transformation with Stephen Rea ripping his face off is variable, but the later scene where Mischa Bergese transforms and a wolf snouts forces its way out through his gaping mouth contains a considerable charge.

The sets are a studied fusion of periods where anachronisms wilfully proliferate – a white Rolls Royce prowls through the forest, 18th century villagers wield modern rifles. Neil Jordan has opted for a deliberately artificial look suggestive of a fairytale environment. There is also a fine, dreamy, multi-layered score.

The Company of Wolves was the second film of Irish director Neil Jordan. Neil Jordan has since gone on to craft a name for himself as one of the finest directors in the world with the likes of Mona Lisa (1986), The Crying Game (1992), Michael Collins (1996), The End of the Affair (1999) and Breakfast on Pluto (2005). Jordan has made a number of other genre films including:– the haunted castle comedy High Spirits (1998); the Anne Rice adaptation Interview with the Vampire: The Vampire Chronicles (1994); The Butcher Boy (1997), a surreal horror film about a disturbed Irish childhood; the clairvoyance thriller In Dreams (1999); the female vigilante film The Brave One (2007); Ondine (2009) about a possible sea nymph; the vampire film Byzantium (2012); and the psycho-thriller Greta (2018).

The only other Angela Carter film adaptation has been the little-seen adaptation of her novel The Magic Toyshop (1989).

The Little Red Riding Hood and werewolf connection was further explored in the interesting Japanese anime film Jin-Roh: The Wolf Brigade (1998), Trick ‘R Treat (2008), Red Riding Hood (2011) and Howl (2021), before being sent up in the gay werewolf film The Wolves of Kromer (1998).