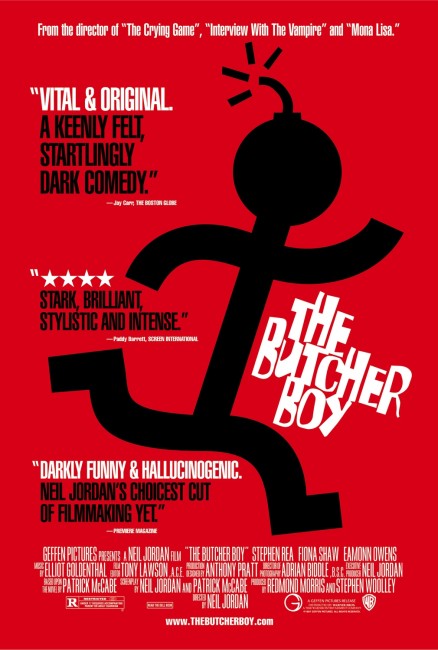 Growing up in Ireland in the early 1960s, young Francie Brady becomes increasingly troubled and unstable after his mother commits suicide, leaving him to be raised by his alcoholic father. Thrown into a Catholic boarding school, he has visions of the Virgin Mary appearing to him. When the self-important town socialite Mrs Nugent lures his best friend Joe away and turns him against Francie, Francie sees her as the focus of his troubles. The alienation causes Francie to erupt in violence.

Irish director Neil Jordan emerged in the 1980s and soon gained great acclaim for the likes of Mona Lisa (1986), The Crying Game (1992), Michael Collins (1996) and The End of the Affair (1999). Jordan has also made a number of genre works (see bottom of page). With The Butcher Boy, took on the task of tackling Patrick McCabe’s celebrated 1992 novel about disturbed youth.

With The Butcher Boy, Neil Jordan (with Patrick McCabe also on script) tackles some difficult themes – the film is an unsettling portrait of a child in an abusive home who becomes increasingly alienated, socially ostracized and eventually locked in an asylum, before the film climaxes in a frightening explosion of violence. Despite the gravity of its thematic matter, The Butcher Boy contrarily manages to be a remarkably cheerful film. Neil Jordan directs with an enormous degree of vibrance and colour and is abetted to a tremendous extent by a wonderfully charismatic and aggressive performance from Eamonn Owens in the central role.

Indeed, The Butcher Boy is possibly the most cheerful film ever made about abusive childhoods, alienation, sexual abuse, madness and murder. Just consider the point-of-view it holds, which is entirely sympathetically balanced toward the boy, where Neil Jordan and Patrick McCabe seek to explain the mechanisms that make the climactic murder a logical act.

If The Butcher Boy had been a film made in America, one cannot help but think it would have been balanced entirely toward the opposite extreme. The conservative social values the character takes issue with would be unquestioningly accepted as a norm and there would have been an unsympathetic and condemnatory attitude toward the boy’s actions. The scene, which is presented here with considerable glee, wherein Eamonn Owens defecates on the carpet of the self-important Mrs Nugent would have been painted in terms of the highest moral outrage. The climactic murder would surely be seen in tones of stunned shock, asking how such could possibly happen. Indeed, an American version of The Butcher Boy would surely have emerged as something akin to The Good Son (1993) or the innately evil child seen at the start of Halloween (1978).

Few audiences realise just to what a sociopathic extreme Neil Jordan ends up taking them to by making them laugh along with and enjoy the film. The entire film seems fired up by the sheer perversity of going well beyond acceptable social norms. With considerably iconoclastic delight, for instance, Neil Jordan casts singer Sinead O’Connor, notorious for ripping up pictures of the Pope on tv, as the Virgin Mary – and predictably O’Connor’s second appearance as the Virgin is accompanied by the query “So what the fuck’s going on here?”

Neil Jordan is a frequent dabbler in genre films. His other genre films include:– The Company of Wolves (1984), an adaptation of one of Angela Carter’s stories that deconstructs Little Red Riding Hood with werewolves; the haunted house comedy High Spirits (1988); the Anne Rice adaptation Interview with the Vampire: The Vampire Chronicles (1994); the clairvoyance thriller In Dreams (1999); the vigilante drama The Brave One (2007); Ondine (2009) about a possible sea nymph; the vampire film Byzantium (2012); and the psycho-thriller Greta (2018).

(Nominee for Best Actor (Eamonn Owens) at this site’s Best of 1997 Awards).