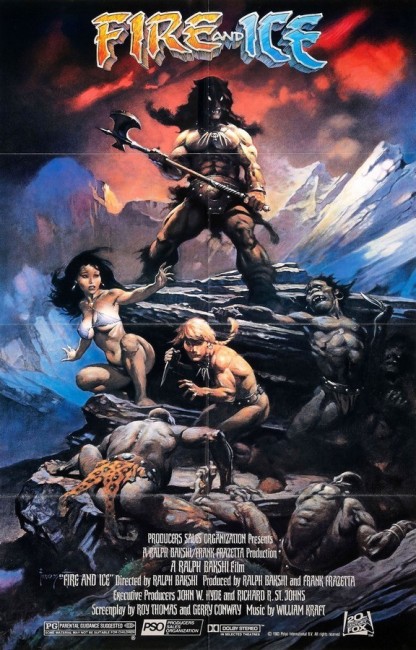 From their stronghold in Icepeak, the evil Queen Juliana and her son Nekron send forth a wave of glaciers, forcing humanity to retreat south. Nekron sends a delegation to King Jarel in Firekeep to request his surrender but this is only a ruse for Nekron’s sub-humans to kidnap Jarel’s daughter, Princess Teegra. However, Teegra makes an escape and comes upon the farmboy Larn, the only survivor of a village razed by glaciers, who offers to escort her back to Firekeep. As Teegra is recaptured, Larn teams with the mysterious Darkwolf to save Teegra and then travel to Icepeak to stop Juliana.

Ever since his rise out of the Warner Brothers tv cartoon factory in the 1960s, animator Ralph Bakshi has been an iconoclastic wild-card. Bakshi skirted public outrage by making the first X-rated animated film, Fritz the Cat (1972) and its adult-oriented, counter-culture works such as Heavy Traffic (1973) and Coonskin (1975). Following the controversy over the latter, Bakshi subsequently turned to fantasy beginning with the modest cult success of Wizards (1977), then ambitiously dared what was then considered the unfilmable, his version of The Lord of the Rings (1978) and Fire and Ice.

Fire and Ice was followed by a couple of experiments in the pop culture mythology with American Pop (1981) and Hey Good Lookin’ (1982). Ralph Bakshi’s films have never been runaway box-office sensations, instead usually only find cult acclaim on the independent circuit. In the 1990s and beyond, Bakshi has fallen relatively quiet, having returned to tv animation, theatrically having only made the disappointing Cool World (1992).

Ralph Bakshi is perhaps the greatest populist of the handdrawn technique of rotoscoping – which consists of tracing images over live-action film, allowing much more three-dimensional and realistic character movement. The technique works particularly well here. It imbues the characters with a vivid range of expressions – most notably the contorted expressions of rage on the face of the sub-humans, or the dynamism that Bakshi is able to suggest when Larn runs. [At the time Frank Frazetta, who is famed for his cover art featuring muscular barbarians and scantily clad heroines, made the amusing comment, “I never quite realised how I was exaggerating the female form [until he came to rotoscoping]. In the back of my mind, I always believed there must be women out there who existed like I draw them.”]

Bakshi sets up and directs the film like an action director instead of an animator. There is a much greater realism of violence and action than the usual animated film – this is animation pitched to adults rather than children, which may well explain why Fire and Ice was a resounding failure. The climax with an airborne attack on the ice citadel mounted aboard the Dragonhawks exists somewhat in the shadow of Star Wars (1977), yet still has a wonderfully exhilarating feel to it. As the story goes, Fire and Ice is strictly a by-the-numbers fantasy scenario, but Ralph Bakshi’s careful attention to characters, the impressive gutsiness of action and the often arresting softness of images, make for a modest standout effort. The only real failing is a clumsily inexpressive score.