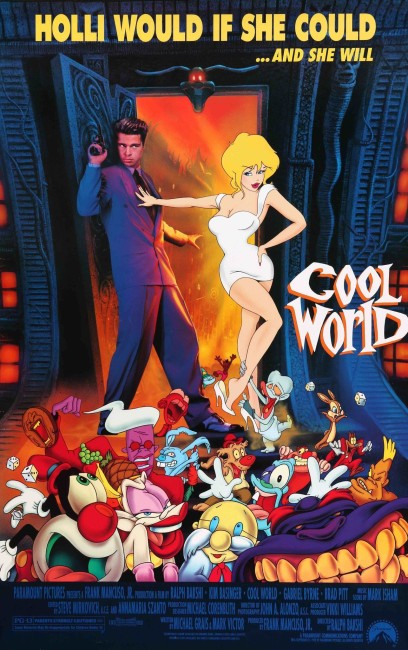 Cartoonist Jack Deebs is famous for his Cool World books but is unaware that Cool World exists as another dimension. He is then drawn through into Cool World where finds himself amid the mind-bendingly surreal inhabitants known as Doodles. The beautiful Holli Would seduces him and Jack learns too late that that sex between a human and a Doodle gives the Doodle human form. Crazed with power, Holli emerges into the real world and sets out to find The Spike that will break down the barriers between Earth and Cool World and allow them to merge into one.

This is another of the films to have tail-jumped in on the success of Who Framed Roger Rabbit? (1988). It is of interest in that it is directed by Ralph Bakshi, who made the controversial adult animated films Fritz the Cat (1972) and Heavy Traffic (1973) and other works like Wizards (1977) and The Lord of the Rings (1978). (See below for a full listing of Ralph Bakshi’s other films). As can always be said of Ralph Bakshi, his films come with an attitude that never makes them less than interesting, even if Cool World ultimately disappoints.

The difference that is immediately noticeable between Cool World and Roger Rabbit is the look of the animation. Robert Zemeckis’s influences on Roger Rabbit came from the Disney and Warner Brothers; Ralph Bakshi comes from an independent animation background where he was inspired by the look of underground cartoons – the film has a wilder and zanier look than Roger Rabbit and the characters are less cutely anthropomorphic and nice.

The foregrounds and backgrounds of the film are packed to the brim with bizarre cartoon incident – characters taking splatterings and ultra-violent pratfalls – all directed with a giddying kinesis that never lets up. The city is a dizzying scape of corkscrew buildings, pretzel-shaped transit systems and structures that seem to perpetually defy gravity. Even more remarkable are the sets that are actually built as opposed to drawn – a mind-boggling series of arabesque flats that exist in two-dimensions.

What disappoints about the film is the relatively crude animation. With Roger Rabbit the animators went to the extent of painstakingly drawing in shadows and smoothing over connections between live and drawn film, but here the artwork seems merely laid over the live-action. The people and the animated characters frustratingly never seem to connect – when the humans and the Doodles touch the movements only seem to be approximate, never act in synch.

The film does have the major benefit of Kim Basinger. There are few actresses better suited to playing the part of a cartoon made flesh than Basinger with her perfect figure and her underrated abilities as a comic actress. The film goes even so far as to play upon the frequent comparisons made between Basinger and Marilyn Monroe. Unfortunately, once he brings Basinger into the flesh, Bakshi makes precious little use of her.

As the cartoonist hero, Gabriel Byrne gives a non-performance, seemingly flabbergasted by having to play second fiddle to a menagerie of demented cartoon characters. Brad Pitt, just a couple of years before his star started to meteorically rise to superstardom, turns his pouty youthful looks toward an amusing mimicry of 1950s cool.

Ralph Bakshi’s other films are:- the controversial Fritz the Cat (1972), the world’s first X-rated cartoon, an absurdist trip through 1960s counter-culture, and other similar counter-culture works Heavy Traffic (1973) and Coonskin (1975); several ventures into epic fantasy with Wizards (1977), his adaptation of The Lord of the Rings (1978) and Fire and Ice (1983); and the non-genre attempts to address American culture in American Pop (1981) and Hey Good Lookin’ (1982). Cool World has been the last theatrical work that Bakshi has made to date and all his other work has been in television.