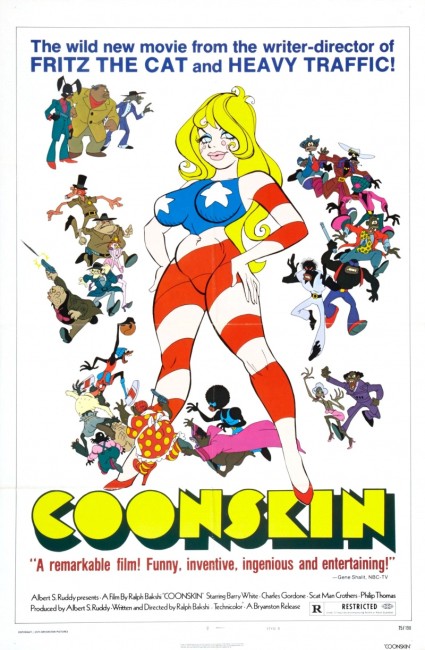 Samson joins Preacher Man as they set out to drive past the jail and pick up the inmates Randy and Pappy as they break out. However, the plan runs into trouble when they are pulled over by racist cops. As they wait for their ride to arrive, Pappy tells Randy the story of Brother Bear, Brother Rabbit and Preacher Fox. After shooting a sheriff who found them pimping out his daughter, Brother Bear, Brother Rabbit and Preacher Fox headed to Harlem. There they eliminated the revolutionary Savior who called himself the Black Jesus and took over his club racket. This brought them up against assorted Mafia, drag queens, hookers and racist white cops.

Ralph Bakshi emerged as an animator on the Terrytoons before breaking out as an independent director. He had a counter-culture hit with his debut film Fritz the Cat (1972), a surreal and anarchic trip through 1960s counter culture cast with talking animals, which had the distinction of being the first X-rated animated film. Bakshi followed that up with Heavy Traffic (1973), an animated trip through the Brooklyn streets where Bakshi grew up. Coonskin was the third of Bakshi’s counter-culture films.

Coonskin’s controversial reception (more on that in the next paragraph) almost wrecked Bakshi’s career, After that point, Bakshi abandoned counter-culture and became more mainstream, conducting a trilogy of animated fantasy films with Wizards (1977), his Tolkien adaptation The Lord of the Rings (1978) and Fire and Ice (1983). He made two further ventures to address American culture in American Pop (1981) and Hey Good Lookin’ (1982) then the animation/live-action toon film Cool World (1992), before his retirement in the 2000s.

However, it is with Coonskin that things started to get problematic for Bakshi as a filmmaker. Bakshi has set out to do no less than examine contemporary race issues and craft a portrait of life as an African-American in 1970s Harlem. To this extent, he went out with a tape recorder and interviewed African-Americans about life. Furthermore, as he did in Heavy Traffic, he has taken a camera out on the streets and into the clubs of Harlem and shot live-action action scenes over the top of which are placed animated characters. The world he captures – a Harlem filled with discos and nightclubs, strippers, drag queens, Mafia crimelords, Black Panthers, revolutionaries and racist white cops – feels very much like a crosscut of the real New York that modern tv shows like The Deuce (2017- ) seem to be trying to recapture.

Coonskin had a wildly opposed reception upon release. It was heavily condemned by the Congress of Racial Equality who picketed theatres and interrupted screenings. The controversy forced the distributor Paramount to drop the film’s release and Bakshi to have to re-edit and remove some of the more controversial dialogue before releasing it independently. Although dismissed by many, the film has started to come under cautious re-evaluation in subsequent years and be seen as the satirical caricature it is.

So where does Coonskin stack up forty years later? Firstly, it should be said that I don’t think Ralph Bakshi is setting out to make a racist or racially derogatory work. For one, Bakshi made a point of hiring a good many Black animators on his production crew. Certainly, if Coonskin were made today, any Jewish man who set out to make a film that offers a snapshot of African-American life would be shot down in a torrent of angry social media invective. On the other hand, you also have to remember that 1975 was a time when the only Black filmmaker out there was Melvin Van Peebles so I am willing to give Bakshi some leeway for the time the film was made and praise in terms of being one white filmmaker willing to venture into a different culture.

On the other hand, some of Bakshi’s depictions of African-American life get problematic. He is free and easy with the N word – the film opens with live-action footage of Scatman Crothers of The Shining (1980) fame singing a song called Ah’m a Nigger Man. Not to mention the very title of the film ‘coonskin’ employs the word coon, another racially derogatory term used for African-Americans.

I don’t think Bakshi is intentionally setting out to be a racist so much as a satirist. His other animated films of this era come from a clear liberal perspective where his sympathies are on the side of revolutionaries and those living ordinary lives. Rather, I think he has appropriated the N word in the same way that Quentin Tarantino does – in seeing it as part of the slang that African-American culture of the day used to talk about themselves. Either that or he was simply trying to be cool and streetwise at a time when such language was regarded as a norm rather than as taboo as it is today.

Bakshi has also intended Coonskin as a modernised take on Disney’s Song of the South (1946), the film that has since been heavily attacked for upholding racist views. This is clearly evident in the trio of characters modelled on Brer Rabbit, Brer Bear and Brer Fox. Coonskin could in effect be titled Uncle Remus Goes to Harlem. Bakshi has also set out to make Coonskin as a satire – an approach that is not exactly known for everybody getting it and seeing the humour (as everyone who has made an insensitive joke or comment in jest on social media has found).

There is a mind-boggling scene early on in the show where the trio wander into a gospel church run by a revolutionary called Black Jesus where Brother Bear is strung up on a cross by Black followers wearing paper bags that resemble KKK hoods where he shoots up pictures of Elvis, Nixon and John Wayne, before the collection plate is taken around for funds to buy guns for the Black Revolution. On the other hand, after about thirty minutes, the film that starts to become rambling and goes from one scene to another without any real plot holding it all together, before eventually becoming rather tedious.