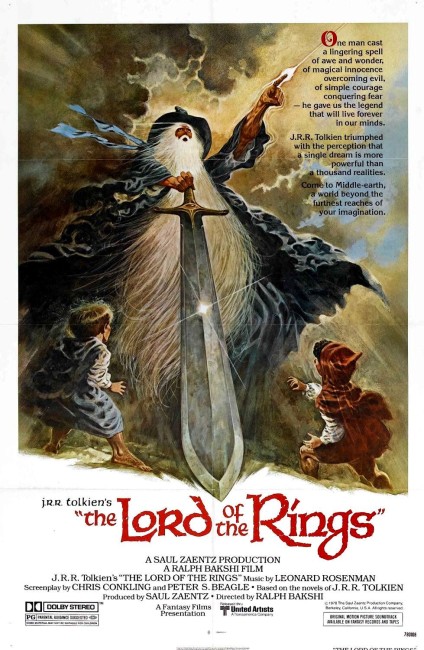 On the occasion of a party to celebrate his 111th birthday, the hobbit Bilbo Baggins gives his nephew Frodo a ring and then departs on a journey. The wizard Gandalf comes, telling Frodo that the ring is in fact the One Ring that was created long ago. The ring holds immense power but the power can only be used for evil and will eventually end up corrupting the wielder. Gandalf persuades Frodo and his hobbit friends to undertake a quest to destroy the ring in the faraway mountains of Mordor. However, their quest mobilises nations and armies who want to possess the ring’s power.

J.R.R. Tolkien’s Lord of the Rings trilogy – one story that was published in three volumes, The Fellowship of the Ring (1954), The Two Towers (1955) and The Return of the King (1956) – is the single most influential work of fantasy ever published. The books themselves developed a cult following in the mid 1960s and by the late 1980s had inspired a vast industry of calendars, volumes of artwork, special editions, unpublished manuscripts and exegeses.

The effect of the books is immeasurable – the entire contemporary publishing boom in fantasy literature and multi-volume trilogies can lay its inspiration at J.R.R. Tolkien’s door. When fantasy has not stolen the plot of the books outright (viz Terry Brooks and David Eddings), its archetypes of small innocent child-like creatures on an epic journey, of dark lords, of artifacts of power, of invented realms with entire maps and detailed histories, have become incontrovertibly rooted in High Fantasy’s archetypal pool of imagery.

The filming of J.R.R. Tolkien is something that bettered filmmakers for decades, daunting even such luminaries as Stanley Kubrick and John Boorman. Animator Ralph Bakshi finally succeeded here in 1978. (J.R.R. Tolkien’s earlier work The Hobbit (1937) was filmed as an animated tv movie The Hobbit (1977) by Rankin-Bass). Ralph Bakshi was the controversial director of the first X-rated cartoons, Fritz the Cat (1972) and Heavy Traffic (1973), and has always maintained an independent edge as an animator through the likes of the culty Wizards (1977), his funky essayals into American culture with Coonskin (1974), American Pop (1981) and Hey There Good Lookin’ (1982), and other films such as the sword-and-sorcery fantasy Fire and Ice (1983) and the toon fantasy Cool World (1992).

Ralph Bakshi was able to mount The Lord of the Rings on the coat-tails of the massive boom in science-fiction and fantasy that had been created by the success of Star Wars (1977). Bakshi succeeded where other directors before him had not by reducing the cost of the production by using animation and in compressing the size of the project by splitting the story into two parts. Unfortunately, the second part has never emerged, due to the The Lord of the Rings‘s lack of major box-office success.

The film was not well received by Tolkien fans. Fans of cult books tend to get very uppity when filmed versions drop even the smallest detail. There is certainly much room for complaint in this regard when it comes to the film. Much of the background detail in the books – the history and mythology of Middle-Earth that is the essence of Tolkien – has been thrown out, while other scenes – such as the encounter with the Tom Bombadil character – are cut altogether or annoyingly truncated – as with the Council of Elrond and the introduction of Treebeard. However, contrary to much of the opinion at the time, The Lord of the Rings comes across reasonably well on the whole. A number of scenes, especially the mirror of Galadriel sequence, retain an unusually literate potency for an animated film.

The quality of animation is excellent. Ralph Bakshi employs his customary rotoscoping techniques – that of tracing over the top of live-action film. This allows the characters a far greater detail of facial animation and movement than is usual for an animated film (with the exception of the orcs and Ring Wraiths, which have ill-defined features). Bakshi draws some magnificently brooding landscapes in browns, reds and navy blues and Leonard Rosenmann contributes a powerful, primal score. There are a number of particularly well sustained sequences – Frodo’s run from the Wraiths and salvation by the waves of a river that form into the shapes of horses; the brooding journey through the mines of Moria; and the incredible animated climax at the Battle of Helms Deep with charging armies of hundreds. (The only minor complaint is the displays of magic, which come across as just cheap psychedelic lighting effects).

The Lord of the Rings is far darker and more realistically violent than expected of an animated film – this is far different to anything Disney was conducting at the time, which may have explained the film’s lack of success. The Lord of the Rings was pitched principally as a children’s film and audiences clearly went in expecting another cutsie Disney film and were taken aback at a much more complex story that is never resolved and has a darker, more violent look. Yet, while the film may not be the filmed equivalent of the books, it is to Ralph Bakshi’s credit that he opens the film up into something dramatic, instead of just operating a Tolkien travelogue.