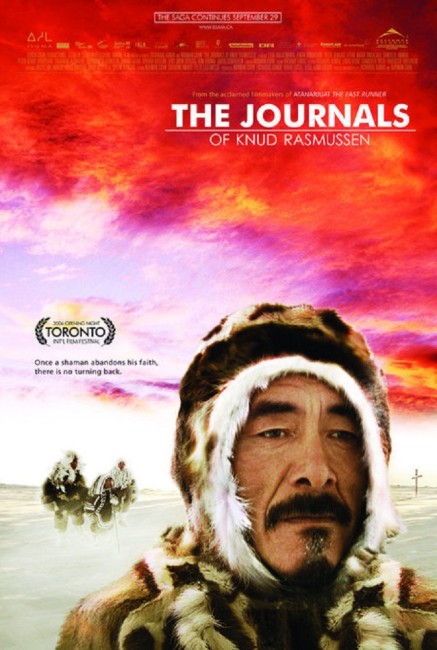 The Canadian Arctic, January, 1921. Among a tribe of Inuit, Apak is the daughter of the shaman Aua. She has married another man after the death of her husband but has inherited her father’s powers and spends her time making love to the spirit of her dead husband while ignoring the living one. The tribe is visited by a group of Danish traders, which include the anthropologist Knud Rasmussen who wants to study the Inuit culture and beliefs. These are the first white people the tribe has encountered. They are later joined by Apak’s ex-husband Nuqallaq who was banished from the tribe for killing a white man and now works for the white men. At the same time, missionaries are moving across the area, converting the Inuit to Christianity and making them forsake their traditional ways.

Inuit director Zacharias Kunuk took the arthouse world’s attention with his first film Atanarjuat: The Fast Runner (2001), an intensely watchable and quite excellent film that had the distinction of being the first work to be shot entirely in Inuktitut, the native language of the Inuit, and entirely cast with and produced by the Inuit peoples.

The Journals of Knud Rasmussen was Zacharias Kunuk’s follow-up to Atanarjuat. This time Kunuk co-directs with Norman Cohn, who was cinematographer and co-producer on Atanarjuat. Norman Cohn has a history as a video installation artist and patented a method of what he calls ‘re-lived’ storytelling – a form of acted out personal/cultural history – to tell the stories of his native people (which is something that gains life during several sections here).

The Journals of Knud Rasmussen could be considered a sequel to Atanarjuat. Not in any sense that a sequel is usually conceived – to spin out further stories of the characters from a popular first work – but in the sense that it is a natural continuation of the themes contained in the first film (although the trailer tries to give the impression that the case is more direct than this). Atanarjuat painted a densely anthropologically authentic portrait of the way that the Inuit peoples lived before European contact; The Journals of Knud Rasmussen extends that to tell the story of the encounter between the Canadian Inuit and Western civilisation, which essentially tore their native culture and beliefs away from them.

The Journals of Knud Rasmussen is based in fact. Knud Rasmussen (1879-1933) was born of a Danish missionary father and Inuit mother and grew up in Greenland familiar with the Inuit ways. He journeyed extensively throughout Greenland and Alaska, and was the first person to ever cross the Northwest Passage via dog sled. Rasmussen’s most famous expedition was The Fifth Thule Expedition between 1921 and 1924 where he undertook no less than an anthropological charting of the culture and origins of the Inuit peoples of Eastern Arctic Canada, whose native ways were under severe threat of assimilation by European contact at the time. Rasmussen’s work is considered one of the most complete anthropological studies ever conducted of the Inuit people.

Zacharias Kunuk makes The Journals of Knud Rasmussen in essentially the same way that he made Atanarjuat. Upon a number of occasions, as he did in Atanarjuat, Kunuk immerses us in the traditions of the Inuit, showing various aspects of their day-to-day life in almost documentary-like detail – their dietary habits, the building of igloos, the singing of traditional songs. Kunuk and Norman Cohn also have a wry grasp of characters and allow each of the mostly non-professional actors to speak naturally and their characters to emerge with considerable inner strength.

The film has a great degree of sadness as we see, from the point-of-view of the Inuit, the loss of their culture. The film pointedly takes the viewpoints of a number of different people, including those that have gone over to work for the Europeans. One of the most potent scenes is a monologue from Samueli Ammaq where he starts into hellfire Christian oratory, invoking people to give up their ways and tells how he as a shaman was brought to a point of doubt by missionaries and so decided to eat some of the sacred meats that he as a shaman was not meant to, in effect sacrificing his shamanistic abilities. Some of Cohn’s relived portraits are also captivating, especially when Pakak Innuksuk gives a long narrated story about his own cursed birth and how he and his mother were banished to an igloo for a year and he had to undergo various rituals while hunting in order to lift the curse.

The main problem that The Journals of Knud Rasmussen has in comparison to Atarnajuat is that it lacks an overall dramatic story structure. Atanarjuat took itself from an Inuit cultural myth and as a result had classic elements like heroes, villains, romance and a dramatic resolution to its story in between its cultural portrait. The Journals of Knud Rasmussen is mostly just a series of character interactions centred around the tribe’s meetings with the Europeans. Most of the scenes are vignettes that could be arranged in a different order without substantially affecting what Knud Rasmussen is saying. There are various character arcs introduced – most substantially Leah Angutimarik and her preferring to make love to her dead husband than her living new one – but this never has any real resolution.

Like Atanarjuat, The Journals of Knud Rasmussen has a minor fantasy element, one that allows you to look upon it as being magical realist fantasy that emerges from a cultural-mythic worldview. In particular, we join Leah Angutimarik as we see her in a series of overlit and blurred shots making love to the spirit of her dead husband.

Zacharias Kunuk next went on to direct the Inuit revenge film Maluglutit/Searchers (2016) and a further story of the meeting between Inuit and white men in One Day in the Life of Noah Piugattuk (2019).