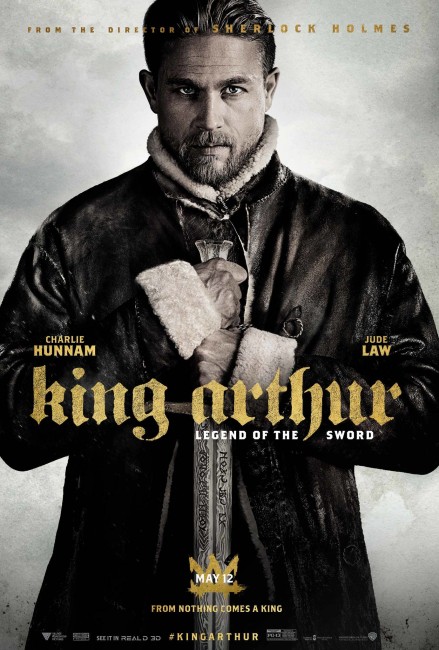 The dark warlord Mordred lays siege to Camelot but is killed by the king Uther Pendragon. Uther’s brother Vortigern then conducts a coup, killing Uther with the aid of sorcerous powers. Unnoticed, Uther’s young son Arthur drifts away in a boat to arrive in Londinium where his found. Arthur grows into a man, living among the prostitutes, and becomes a streetwise dealer and fighter. The waters at the gates of Camelot retreat, revealing Uther’s sword Excalibur buried in a stone. Arthur is captured and sent to Vortigern’s castle where all men are being tested to find the rightful one who can draw the sword from the stone. Arthur becomes the one to successfully do so but collapses immediately after touching the sword. Vortigern plans a show trial where Arthur is crowned but plans that he will then be executed and Vortigern proclaimed king. However, Arthur makes an escape, aided by a mage. Falling in with revolutionaries, The Mage tries to get Arthur to accept his destiny and wield the power of Excalibur to fight back against Vortigern.

King Arthur may or may not have existed. There are scanty historical documents written several centuries later that suggest he may have been a warlord (no mention of a king) in England of the 5th Century A.D., although some question has been placed on the authenticity of these texts. A stone discovered in 1998 at Tintagel Castle with the name Artognu was taken as evidence but the stretch to connect names has been ridiculed by historians.

The lack of historical basis has not stopped much mythology building up around Arthur. Most of the Arthurian story was put down by Geoffrey of Monmouth in The History of the Kings of Britain in the mid-12th Century in which Geoffrey introduces Arthur, Merlin, Mordred and Guinevere. Later writers during the French court of the 12th-13th Centuries, in particular Chretien de Troyes, introduced the Holy Grail, placed a focus on knightly chivalry and introduced the tragic attraction between Guinevere and Lancelot. Morgana was introduced by Geoffrey but there she was actually an ally of Arthur, while later versions make her the villainess of the cycle. There have been a great many modern works of Arthurian fiction and films and tv – see bottom of the page for which.

Guy Ritchie is a British director who emerged in the 1990s specialising in crime films with the likes of Lock, Stock and Two Smoking Barrels (1998), Snatch. (2000), Revolver (2005) and RocknRolla (2008), which usually feature an ensemble of tough-talking characters in an East End London criminal underworld setting. Ritchie’s filmmaking was eclipsed for a few years by a high-profile marriage to Madonna and one disastrous film outing together, the widely ridiculed Swept Away (2002). Ritchie of the late 2000s is a filmmaker who seems to work with one eye towards Hollywood with works based on other properties like Sherlock Holmes (2009) and its sequel Sherlock Holmes: A Game of Shadows (2011) with Robert Downey Jr and Jude Law, the big screen remake of the 1960s spy tv series The Man from U.N.C.L.E. (2015), King Arthur: Legend of the Sword and subsequent the live-action remake of Disney’s Aladdin (2019). In all cases with these, fans of the original were a little taken aback by the liberties Ritchie saw fit to take with the source material.

King Arthur: Legend of the Sword was the first time that Guy Ritchie ventured into the fantastic genre in any of his films. Well, Sherlock Holmes did feature a dark sorcerer but opted for a mundane resolution, while The Man from U.N.C.L.E. is based on an original property that used to regularly feature science-fictional elements only for Ritchie to throw them all out when it came to the film. So Ritchie essentially comes to King Arthur as a novice to full-flown fantastic cinema. That perhaps explains why the film is such an awkward beast.

What Ritchie essentially serves up as a King Arthur film retooled as a Michael Bay film. This is immediately apparent from the opening scenes where the assault on Camelot occurs with battle elephants about the size of Godzilla storming the castle, troops spilling out of command hutches on the elephant’s backs, amid the tossing of magic fireballs, and rival armies clashing atop collapsing aqueducts. The rest of the film stumbles through a series of overblown action sequences interspersed with occasional bits of the Arthurian legends whenever Ritchie remembers to get back to them.

While keeping in mind that Ritchie is a novice to the fantasy genre and CGI spectacle, he nevertheless more than shows he is not the same dab hand with visual effects that Bay is. Thus many of the sequences seem unconvincing eye candy that continually remind you they are never anything less than obviously CGI. Not to mention that they often just seems effects for their own sake – Charlie Hunnam is assigned to go into the Dark Lands, which simply becomes about him being encountering a random assortment of creature effects, and for no real reason I am able to ascertain a giant snake bursts through a window after Jude Law at one point.

Ritchie plays free and easy with the Arthurian legends. Morgana has been entirely written out, although we do have a Mordred – but there is no suggestion he is Arthur’s bastard son, which would have been kind of impossible given that he is a full-grown nemesis and killed when Arthur is only a boy – and has been retooled as a general all-purpose dark warlord. There is also no Guinevere – indeed, in Ritchie’s man’s man universe, the women are shuffled off to the sidelines – although in a novel touch, we get an Arthur who has been raised in a brothel. One of the more creative changes is that the stone that the sword is drawn from is actually Uther Pendragon’s petrified body after Uther, knowing he was about to die, tossed Excalibur into the air and impaled himself.

The main bad guy of the show is Vortigern played by Jude Law. Vortigern is purportedly a historical king who maybe lived in the 5th Century and exists in the same legendary, historically unverified state as the existence of Arthur – some accounts insert Vortigern into the Arthurian legends but he has never been anything other than a guest star in one or two stories and certainly has never been written in as Uther Pendragon’s brother.

What we have feels less like a film about King Arthur and the Knights of the Round Table than it does the Arthurian legends refitted as some strange bastard child of a Michael Bay and a Guy Ritchie film. Ritchie is entirely disinterested in the romance of the cycle – women rarely feature in speaking roles in the film – and about the same when it comes to the chivalry of the cycle, which is mostly shuffled off to a scene at the end with the gang being knighted amid jokes about what the purpose of the Round Table is.

Mostly what Guy Ritchie seems to want to do is give us one of his typical Men’s Men films – focused around tough guys and their tough talk and almost homoerotic scenes of pugilism – in which he reconceives the Knights of the Round Table in terms of one of his crime films as a group of diverse criminals with quirkily distinctive personalities all coming together to conduct a caper. Indeed, the first scene where we meet the adult Arthur is one in which he narrates a typically Ritchie-esque flashback explaining how he took owed money from the Viking leader, which is directed with fast kinetic cuts and equally fast, urgent talking as the scheme is explained in lots of colluqialiese. Later in the film there is another caper plot where the group come together to conduct an assassination attempt on Vortigern.

Other versions of the legend of King Arthur are:– a Three Stooges spoof Squareheads of the Round Table (1948); the Cinemascope historical adventure, Knights of the Round Table (1954); the live-action tv series The Adventures of Sir Lancelot (1956-7); Cornel Wilde’s Lancelot and Guinevere (1963); the Disney animated version with cute animals, The Sword in the Stone (1963); the comic cartoon series Arthur and the Square Knights of the Round Table (1966); the big budget musical, Camelot (1967); Robert Bresson’s deconstructed Lancelot du Lac (1974); King Arthur, The Young Warlord (1975); the absurdist comedy send-up, Monty Python and the Holy Grail (1975); the arthouse Perceval Le Gallois (1977); the tv series The Legend of King Arthur (1979); the German tv series Merlin (1980); the dreary TV mini-series Arthur the King/Merlin and the Sword (1981); the superb Excalibur (1981), the finest screen version of the Arthurian story to date; the Wagnerian opera Parsifal (1982); the tv series Merlin of the Crystal Cave (1991); the animated tv series King Arthur and the Knights of Justice (1992-3); a modern updating, October the 32nd/Merlin (1992); Arthur’s Departure (1994) about time travellers attempting to snatch King Arthur; First Knight (1995), which retells the story as a non-fantastical romance; Kids of the Round Table (1995), a children’s version that retells it in schoolyard terms; Lancelot, Guardian of Time (1997) with a time-travelling Lancelot; the tv mini-series Merlin (1998) and its original sequel Merlin’s Apprentice (2006); the tv movie Merlin (1998) with Jason Connery as the young wizard; the animated Quest for Camelot (1998), which concerned the daughter of one of the Knights of the Round Table; The Excalibur Kid (1999) in which a child is transported back in time to Arthur’s court; Merlin: The Return (1999) in which Arthur and the knights are revived in the present; the tv mini-series The Mists of Avalon (2001), which tells the story from the perspective of the women; the historical spectacular King Arthur (2004); The Last Legion (2007), an historical spectacular that acts as a prequel to the Arthurian saga; the tv series Merlin/The Adventures of Merlin (2008-12); Merlin and the Book of Beasts (2008); the tv series Camelot (2011); King Arthur: Excalbur Rising (2017) and The Asylum’s mockbuster King Arthur and the Knights of the Round Table (2017), which places the Knight of the Round Table in the present-day; the modernised The Kid Who Would Be King (2019); and Arthur & Merlin: Knights of Camelot (2020). Other variants include the lowbrow comedy foil of Mark Twain’s A Connecticut Yankee in King Arthur’s Court (1889), filmed variously in 1921, 1931, 1949, 1979 and 1989. Parts of the myth have turned up in various films and particularly tv series – Merlin (played by Ringo Starr) as an advisor to various Famous Monsters in Son of Dracula (1974); The Round Table turned up in an episode of Robin of Sherwood (1983-6); Merlin and Lancelot appeared in the present day in an episode of The Twilight Zone (1985-7); the Doctor Who (1963-9) episode Battlefield (1989) attempted a science-fictional retelling, while Transformers: The Last Knight (2017) revealed the Knights of the Round Table were Transformers and Hellboy (2019) featured a revived Merlin and had Hellboy wielding Excalibur; and various series have played the myth out in various futuristic settings – against a post-holocaust dictatorship in Knights of God (1987) and as a puppet space opera in Space Knights (1989).