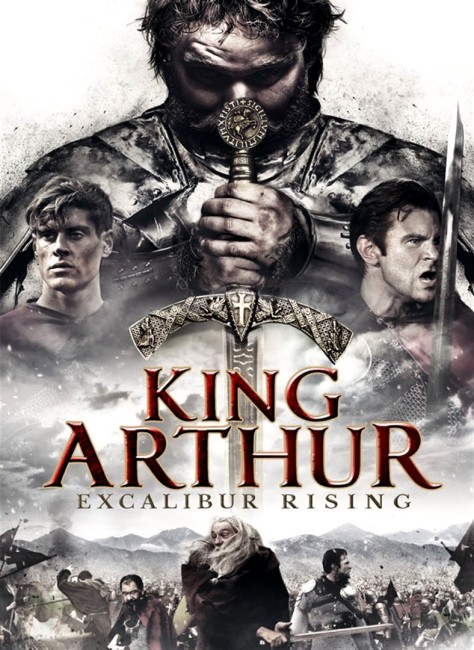 King Arth-yr is killed by his son Mordred at the Battle of Camlann in 520 A.D.. Before he dies, Arth-yr tasks Sir Bedivere with returning Excalibur to the Lady of the Lake. Nineteen years later, Bedivere is captured and thrown in a pen where he realises that his fellow prisoner Owain is Arthur’s son. Before dying, Bedivere urges Owain to find Merlin. Owain is dumped for dead but is saved by the Lady of the Lake who gives him Excalibur. However, Excalibur is intently sought by Mordred and his mother Morganna who has the Holy Grail and is using it for blood magic to rejuvenate herself.

2017 seemed to presage a major revival of the Arthurian Legends on the screen. The big-budget Guy Ritchie retelling King Arthur: Legend of the Sword (2017) was anticipated to be one of the blockbusters of the season and filmmakers seemed to be rushing to jump aboard the bandwagon – only for the Ritchie film to prove a massive flop upon release. The Asylum chimed in with their cheap modernised mockbuster version King Arthur and the Knights of the Round Table (2017). The Arthurian legends were even grafted onto Transformers: The Last Knight (2017) where the Knights of the Round Table were rewritten as Transformers and there was the modernised The Kid Who Would Be King (2019). Amid these there was also King Arthur: Excalibur Rising.

King Arthur: Excalibur Rising is an oddity amongst these in that it doesn’t concern itself with the Arthurian tales so much as it is a sequel to them. Arthur and the Knights of the Round Table are disposed with after the first scene. Merlin, Mordred, Morganna, Sir Bedivere and the Lady of the Lake make appearances and in truth the story could have had not much trouble being rewritten as a tale about Arthur.

It gives the impression of being a film that was made a couple of years earlier and sat on the shelf until someone took the opportunity to release it on the back of the Ritchie film and what was still being called Excalibur Rising only a few months before the film’s release was quickly slapped with the prefix King Arthur.

King Arthur: Excalibur Rising is B-budget Arthuriana. It is not particularly bad, just an average retelling. The budget stretches to a handful of passable visual effects. On the other hand, it results in an Arthurian film that lacks much in the way of magic – one visual effect where Excalibur creates a spell of invisibility. Morganna’s magic more mundanely consists of her draining people’s blood for the purpose of rejuvenation/resurrection of the dead (a novel repurposing of the Holy Grail). The swordfights are unexciting stuff that consist of little more than the various actors crossing swords in a way that has not been terribly well choreographed.

Elsewhere Welsh director Antony Smith has been prolific as a low-budget producer. He previously directed Viking: The Berserkers (2014) and subsequently went on to make the horror film The Cleansing (2019).