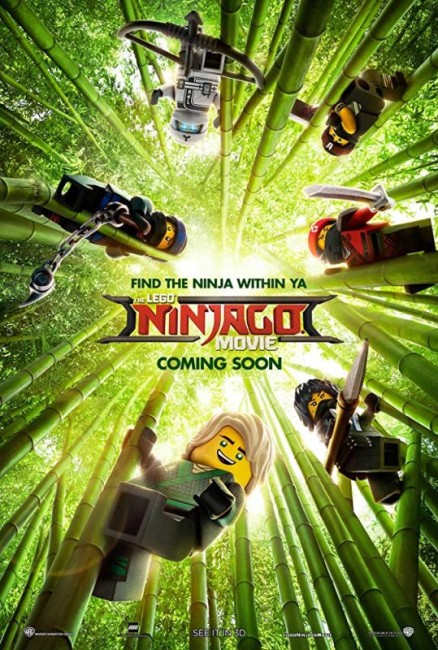 In a curio shop, the owner tells a kid the story of small warrior figurines on display. In Ninjago City on Ninjago Island, Lloyd was the son of the super-villain Lord Garmadon who was constantly trying to invade the island. Because of his father, Lloyd was despised by everybody. Lloyd also secretly operated as part of a team of classmates who went into action in masked costumes and hi-tech vehicles to fight off Garmadon and his armies. They were trained in the art of Spinjitsu by Master Wu who introduced Lloyd to the Ultimate Weapon. After a particularly devastating attack by Garmadon, Lloyd took the Ultimate Weapon to use against him. This turned out to be a laser pointer that set a cat loose, which devastated large swathes of the city. In order to stop the cat, Lloyd and the other ninja joined Garmadon on a quest to find the Ultimate Ultimate Weapon. The course of the journey also meant Lloyd had to reconcile with his father.

The Lego Ninjago Movie was the third of the films based on the Lego toy series. There have been various Lego short films, video releases and tv series since the early 2000s but these did not gain widespread success until the hit of the theatrically released The Lego Movie (2014). Following on from Batman’s scene-stealing cameo in The Lego Movie, we then had The Lego Batman Movie (2017). This too was a considerable success, while the original was sequelised as The Lego Movie 2 (2019). Other Lego movies are planned.

The Lego Ninjago Movie is based on the Lego Ninjago line of toys. These first appeared in 2011 alongside the animated tv series Lego Ninjago: Masters of Spinjitsu (2011– ), which is in its seventh season as of this writing. Between them, the toys and animated series build out a mythos based around the world of Ninjago, which is defended by ninja who fly dragons, practice the martial art of Spinjitsu and have powers associated with various elements as they fight the evil Lord Garmadon. The story of the film is a condensation of the main plot elements of the animated series.

The two previous Lego movies established a certain style – the blocky characters; the Lego-based universe; the snappy fast-paced, self-deflating humour, including gags that frequently broke the fourth wall. The Lego Ninjago Movie does a fairly good job at finding the same energy and humour. It is perfectly enjoyable, although does give the impression that the Lego Movie brand might be fading somewhat – where The Lego Batman Movie, released seven months earlier, came in at $175 million at the US box-office, $312 million worldwide, The Lego Ninjago Movie scraped by at a more modest $51 million, $97 million worldwide, while the subsequent The Lego Movie 2 (2019) earned around the same, which was only a fifth of the first film.

You could maybe factor in that Batman is a more well known pop culture figure worldwide and that Ninjago and/or ninja plays to much more of a niche market but this does represent a drop. You suspect that this is the reason the film winds in a noticeably aging Jackie Chan in the live-action wraparound scenes in an effort to sell the film to the Chinese box-office, which is considered all-important these days (even though ninja technically come from Japanese tradition as opposed to Chinese).

The Lego Ninjago Movie gets most of the fun, humour and style of the other two Lego films down right. The film’s most amusing scene is the unveiling of the Ultimate Weapon, which turns out to be a laser pointer that promptly draws a cat that in effect acts as the monster in a Godzilla film and demolishes the city as it chases the red point everywhere. Elsewhere, the film has an amusing story arc of father-son reconciliation – one that you suspect is based in no small part on The Empire Strikes Back (1980) – and has a great deal of fun pouring on mock sincerity and sentiment while wittily deflating it at the same time.

One of the main criticisms I would make of both The Lego Batman Movie and The Lego Ninjago Movie is that they move at such a fast pace that you rarely get time to take in the detail of the world. Ninjago City comes with a dazzling range of things happening in the background, dozens of figures in street scenes, lightning-paced combat scenes with the Ninjago Transformers fighting off against Garmadon’s forces.

The detail that seems to have gone into the vehicles and places, the number of active elements in the frame all at once look dazzling but everything whips past at such a quick pace that you get only a few seconds to take in each image. Watching in a theatrical setting without the benefit of a pause button is frustrating. You want the film to stop and spend a little more time so you can take in the artistry on display.

Co-director Charlie Bean next went on to direct the live-action Lady and the Tramp (2019).