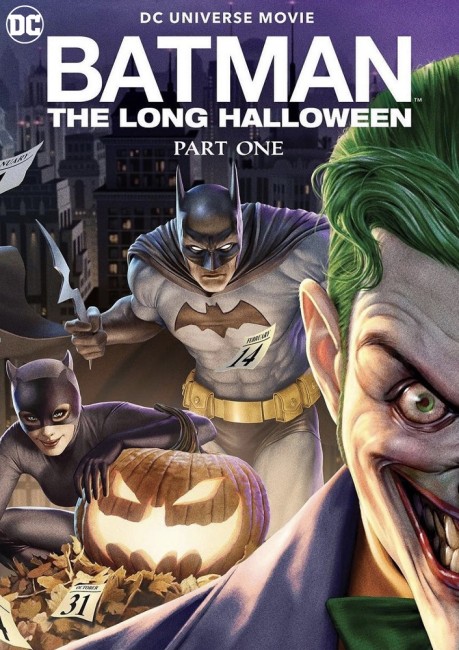 Following the murder of a member of the Carmine Falcone syndicate just before he was due to give evidence, Commissioner Gordon brings together Batman and District Attorney Harvey Dent to take a stance. In her flirtation with Batman, Catwoman leads him to a warehouse that contains the billions in cash that Falcone has been unable to launder. She suggests to Batman and Dent that they set the warehouse on fire. Immediately after they do so, a bomb is set off in the Dent home, hospitalising Harvey. The assassinations of mob figures continue, each occurring on a holiday. In the midst of this, Batman tries to work out who among the potential suspects, including The Joker and members of Falcone’s organisation, might be the killer known as Holiday.

Batman: The Long Halloween (1996-7) is a classic graphic novel series, originally published in thirteen issues. It was written by Jeph Loeb who started as a screenwriter with scripts for films like Teen Wolf (1985), Commando (1985) and Burglar (1987) before venturing into comic-book writing. Loeb subsequently became a producer and occasional writer on usually comics-adapted tv shows such as Smallville (2001-11), Lost (2004-10), Heroes (2006-10), Agents of S.H.I.E.L.D. (2013-20), Daredevil (2015-8), Jessica Jones (2015-9), Luke Cage (2016-8), Iron Fist (2017-8) and The Punisher (2017-9). Loeb’s work was previously adapted by the DC Universe Original Animated Movies with Superman/Batman: Public Enemies, Superman & Batman: Apocalypse and Batman: Hush. In not wanting to spoil the surprises in store, I have not delved too deeply into the background on The Long Halloween and will fill in after I have seen Batman: The Long Halloween Part Two (2021).

When it comes to adapting The Long Halloween, the DC Universe Original Animated Movies have followed what they done with their adaptations of other classic graphic novels by dividing them into two parts, where the Frank Miller classic The Dark Knight (1986) was split into Batman: The Dark Knight Returns Part I and Batman: The Dark Knight Returns Part II, while the all-time best-selling The Death of Superman (1992-3) became The Death of Superman and Reign of the Supermen. As with Death of/Reign of the Superman, the intention with The Long Halloween has been to later edit the two parts together as a single film.

The Long Halloween was intended as an extension of Frank Miller’s Batman: Year One (1987), showing the development of several of the key super-villains, in particular depicting how Harvey Dent became Two-Face. Elements from the storyline were incorporated into the Two-Face story in Christopher Nolan’s The Dark Knight (2008). Here we see it is not too long into the point when Bruce Wayne has become Batman. Harvey Dent has not yet become Two-Face but we see indications of the direction he is heading. We see Batman’s flirtation with and attraction to Catwoman, with the story attempting to create a Clark Kent-Lois-Superman thing with his dual level attraction between Batman/Catwoman and Bruce Wayne/Selina Kyle. Bruce Wayne has undergone the physical training but it is frequently stated he is not a detective with the indications he needs to develop a skillset in this area before attaining the sobriquet ‘The World’s Greatest Detective’.

Visually, the film stuns from about the point of the opening credits that abandon the usual static panels of the DC Universe Original Animated Movies for something highly stylised – a vivid series of montages of life and corruption on the streets and Batman in action, alongside various comic-book panels and a series of white lines that weave through the action before coalescing into the emblem of the bat.

Even more stunning are the backgrounds of the film, which substitute the usual Gothic Noir or Art Deco stylism that has been the de rigeur background for the animated Batman ever since the Bruce Timm tv series Batman (1992-4). Here we get a series of backgrounds that come in the sort of stunning detail that make you think you are looking at actual sets. When Catwoman leads Batman on a flirtation-come-chase across the sides and tops of buildings and along the top of a train, the effect is exhilarating. It is here that The Long Halloween feels like the film that may rise out of the competent and generally enjoyable middle ground that the DC Universe Original Animated Movies have been drifting through the last few years under Jay Oliva and Sam Liu and attain something of the inspired quality of the original Bruce Timm series or films like Batman: Under the Red Hood or Batman: Year One.

Perhaps the least satisfying aspect of the story is the development of the villain Holiday. Not through any fault of the film but for the simple fact that the aspects of that story are only starting to be sketched – several of the murders, Batman puzzling over who might be the suspect – before the film comes to an end. The story takes a big scope – Harvey Dent’s story arc, appearances from various familiar villains, the story of Carmine Falcone and his history with the Wayne family and the significance of his son Alberto and his fixation on crossword puzzles (which if anything feels like it is setting him up to become The Riddler), while everything is told over the space of several months. However, all of these are threads that are left dangling to be completed in the second part. Even at the end of the film, Holiday still remains a blank face on Batman’s suspect list.