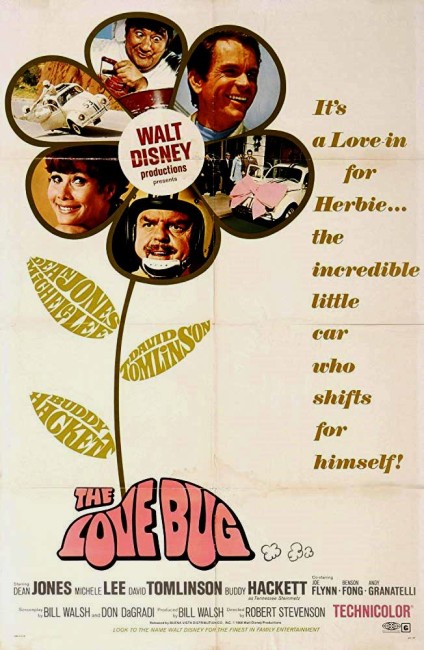 Racing driver Jim Douglas is down on his luck with nobody willing to sponsor him any longer because he has crashed too many cars. While visiting the car showroom of the pompous Peter Thorndyke, a Volkswagen takes a liking to him and follows him home. He is forced to buy the car to escape prosecution by Thorndyke. Immediately afterwards, the Volkswagen starts acting with a mind of its own. Jim’s mechanic and roommate Tennessee Steinmetz realises that the car, Herbie, is alive. Unaware of its true nature, Jim enters the car in races. Herbie is able to outwit all the other cars and rapidly revives Jim’s career. However, Jim must then deal with a jealous Thorndyke who is determined to sabotage his chances.

The Love Bug was the first in a series of long-running cutsie car live-action comedies from Disney. It comes from Robert Stevenson, the director and producer who also made The Absent-Minded Professor (1961), Mary Poppins (1964) and numerous other Disney films throughout the 1960s and 70s. The Absent-Minded Professor had fairly much set the formula for the Disney live-action comedy – usually involving a bright but absent-minded inventor and a fantastical vehicle or invention that would offer the crucial advantage at various sporting events.

The Love Bug quickly follows the formula. The action is innocuous slapstick fare, even if the film is slightly ponderous and overlong. Robert Stevenson even achieves a certain poignancy at times, like the scene where Herbie, saddened because it has been abandoned for a Lamborghini, attempts to jump off the Golden Gate bridge.

The likes of Peter Tomlinson as a standard scenery-chewing Disney villain and Buddy Hackett as the eye-rolling jelly-mold sidekick overplay as the Disney live-action tradition goes. Dean Jones is terribly flat and boring as the hero, but Michelle Lee is enchantingly likable opposite him as the love interest.

The Love Bug was one of Disney’s most successful live-action films and inspired a long-running series of sequels. The best of these was the delightfully surreal subsequent entry Herbie Rides Again (1974), which was followed by the likeable Herbie Goes to Monte Carlo (1977). Inspiration was beginning to flag by the time of Herbie Goes Bananas (1980) and the entirely dreary tv series Herbie the Love Bug (1982), which only lasted six episodes. The film was later remade as a tv movie The Love Bug (1997), featuring no less than Bruce Campbell as the driver. Dean Jones appeared in all of these except Rides Again and Bananas. More than twenty years later, the series was revived with Herbie: Fully Loaded (2005). The success of the Herbie films also inspired other cute car films such as West Germany’s Beetle series.