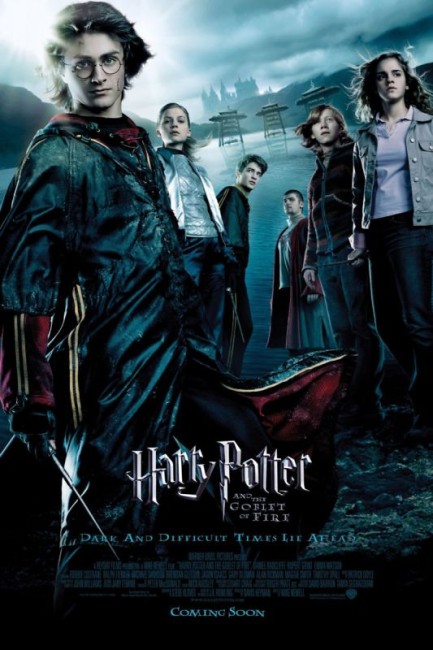 It is announced that Hogwarts will play host to Triwizards Tournament, which is held between three wizardry schools – Hogwarts, Beauxbatons Academy from France and the Durmstrang Institute from Bulgaria. Potential contenders throw their names into the Goblet of Fire, which chooses one competitor from each college. The competitors must then face three life-threatening challenges and the winner’s name will go down in legend. Due to the dangerousness of the challenges, a decision is made this time to limit the tournament only to students over the age of seventeen. As the challengers are selected, Harry Potter finds that someone has cast his name into the Goblet of Fire and he is chosen as a fourth competitor despite being only age 14. As the tournament gets underway, Harry is aided by the new Defence Against the Dark Arts professor Alasdor Moody. In trying to unravel the mystery behind who placed his name in the Goblet of Fire, Harry comes up against a new threat from the disciples of Lord Voldemort.

I cannot say I am a huge fan of the Harry Potter books or films. Much of the problem rests with J.K. Rowling’s writing, which features one-dimensional characters and is often dependent on contrived plot devices. Part of the problem has also been that about the time that the Harry Potter and Goblet of Fire novel came out (2000), J.K. Rowling was starting to flex her muscle. Not in the sense that she was gaining her strengths, but rather that The Goblet of Fire was the point that she decided that she was successful enough that she could tell people who earlier might have suggested that she cut her material where to get off. Where the earlier Harry Potter books had been around the 300 page mark, The Goblet of Fire suddenly expanded to 700 pages and all of her subsequent books have remained at around this length, much to their detriment.

In reducing a 734-page book to a 157-minute film, the filmmakers here have had to leave a few subplots out. A comparison with the Goblet of Fire book shows that the filmmakers have done a remarkable job in retaining most of the story (and allowing it to make sense moreover). However, there are a number of hurried and/or unexplained patches – who killed Barty Crouch Snr? During the second part of the tournament, what are Ron, Hermione, Cho etc doing tied up at the bottom of the lake? Some scenes – the abrupt arrival into the midst of the World Cup at the start, the jump from the maze to the meeting with Lord Voldemort – seem hurried as though bridging scenes have been excised to bring the film in on running time.

Harry Potter and The Goblet of Fire also comes with a weak story. J.K. Rowling did the magical murder mystery story in Harry Potter and the Chamber of Secrets where it worked passably well (albeit with a good many improbabilities). She tries to repeat the same thing here but the mystery is not at the forefront of the story and the way the film tells it, it is not always clear what is going on. Someone interrupts the Quidditch World Cup but why and much about this is not clear and then the issue is largely forgotten. There is some mystery generated about how Harry’s name ended up getting into the Goblet of Fire but this question is also set aside until the end. The mystery aspect feels more like a subplot that the film occasionally remembers to get back to.

The rest of the The Goblet of Fire seems like a glorified sports film, with magical tournaments substituted instead of standard sporting events. The sentiments and triumphs throughout are the same as any sports story with the film naturally championing an untrained rank outsider who takes on the skilled champions with the odds stacked against him etc etc. However, the nature of J.K. Rowling’s writing is such that we are never in any doubt as to the outcome of the events and who will become the champion.

Moreover, the problem that one has with J.K. Rowling’s plots is that they only make sense in terms of forward momentum but when examined in reverse ie. looked at once the twists and surprises are known, then they often seems a mass of contrivances and improbable coincidences. In The Goblet of Fire, for instance, we learn that every single thing that happens during the course of the story – from Harry’s name being placed in the Goblet of Fire and then selected, to his somehow managing to make it all the way through the tasks and beat his competitors, not to mention all the information that has been leaked to him throughout, has been set up for the specific task of getting him to the portkey that will take him to the confrontation with Lord Voldemort at the end. The amount of contrivances required to get to this point defy belief and one has difficulty wondering why the individual behind this elaborate scheme could simply not have abducted or persuaded Harry to step through the portkey in a more orthodox and less complicated manner.

Harry Potter and the Goblet of Fire is certainly a much more polished film than its predecessors. The producers have chosen a new director in Mike Newell. Newell is a seasoned director who has made films such as Dance with a Stranger (1985), Enchanted April (1992), Four Weddings and a Funeral (1994), Donnie Brasco (1997) and Pushing Tin (1999). Newell has ventured into genre material several times before with the likes of the mummy film The Awakening (1980), Bad Blood (1982) about a true life New Zealand mass murderer and the Irish children’s film Into the West (1992), as well as the subsequent videogame adaptation/Arabian Nights adventure Prince of Persia: The Sands of Time (2010). (Newell is incidentally the first English director to put his hands on such a quintessentially British series as Harry Potter).

Mike Newell certainly gives us the most directorially satisfying of the Harry Potter films to date. Unlike Chris Columbus from the first two films, who let the effects team take over the show for him, Mike Newell tells a spare dramatic story. The effects are much more flawless and less intrusive and as a result the scene with Harry fighting the dragon and other set-pieces like the appearance of the carriage drawn by pegasi and the submarine galleon have much more of an authentic sense of wonder to them, something that was entirely absent in Chris Columbus’s films.

The best scenes in the film are those in the middle, which are not dependent on special effects or where J.K. Rowling’s absurd plot contrivances come into play, but where Newell seems attuned to the characters and allows some of the regular characters to come across with a sense of humour. Here is also the point in J.K. Rowling’s stories where we see the characters sitting on the cusp of adolescence and growing into a gradual awareness of the opposite sex with an amusing and believable awkwardness. It is these scenes that work the best in the film. The main problem though is that Mike Newell has been handed a sow’s ear of an original story. That he manages to turn it into any kind of purse at all, if not a silk one, is a considerable complement.

Almost all of the cast seem to be growing into their roles by now, especially the younger actors. As usual, it is the guest actors that manage to steal the show. Irish actor Brendan Gleeson does a particularly good job as the bizarre character of the one-eyed Professor Moody who looks like a refugee from The Cyclops in The City of Lost Children (1995). Gleeson manages to create a character that you are not sure is friend or foe and that holds some ambiguity amid J.K. Rowling’s usual black-and-white one-dimensional characterisations. An almost unrecognisable Ralph Fiennes rises to the fore and gives a wonderfully theatrical and hissable performance as Rowling’s uber-villain Lord Voldemort in the final scenes.