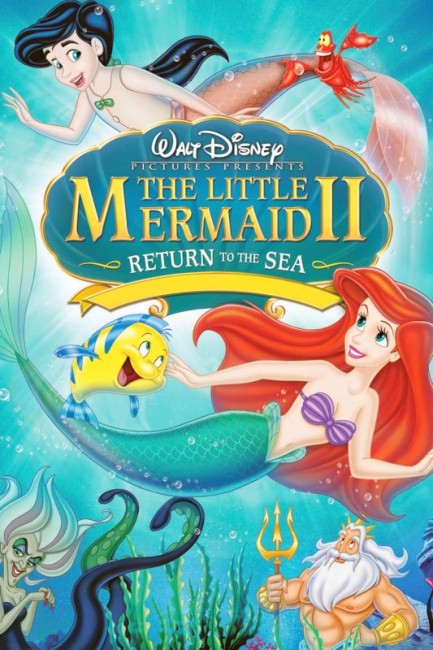 The mermaid Ariel gives birth to a daughter Melody. When Ursula’s evil sister Morgana tries to snatch Melody, Ariel decides that it would be in Melody’s best interests to keep her away from the sea and ignorant of the mermaid half of her nature. As she grows up, Melody inadvertently strays away and discovers the sea. Morgana quickly exploits this, magically transforming Melody into a mermaid and then tricking her into going and stealing King Triton’s trident.

In the 1990s, Disney underwent a radical remarketing of their image. At the top of the line have been the dazzling, high-quality boundary-pushing likes of films such as Beauty and the Beast (1991), The Lion King (1994) and Dinosaur (2000). However, the lower end of the spectrum revealed a cynical attempt to market everything possible from their brand name with a line of Disney stores that sell solely Disney merchandise and an endless number of video-released sequels to successful cinematic product.

This sequel to The Little Mermaid (1989) comes with a sense of creative futility. Children’s films play upon simple, plaintive emotions – that a story is absolute and ever after. A sequel to a fairytale cheats – it can only tell a lesser tale, one that by implication means the purity of the mythic arc and innocence in the original were less than they were painted to be, and one that is clearly cynically exploiting the love of young children for the characters with the sole intention of milking more money out of them.

The Little Mermaid II: Return to the Sea imitates its original in banal ways – the new mermaid is a carbon copy of her mother; the sole difference between the new villainness Morgana and her mother Ursula is a name change; and the same supporting characters are back. The songbook no longer has Alan Menken and Howard Ashman writing and is only a series of trite show tunes belted out without any feeling.

On the other hand, The Little Mermaid II: Return to the Sea is often hard to dislike. While the lead characters (the heroine and villainness) are bland, the supporting characters are a good deal of fun. The returning characters of Scuttle and Sebastian are a delight and the film adds an appealing new line-up of characters including the villainness’s bumbling sidekick who is a miniaturised shark and the characters of two explorers, a penguin and a walrus. It is these characters that eventually allow the latter half of The Little Mermaid II: Return to the Sea to emerge in a balance of adventure and comedy that never outwears its welcome.