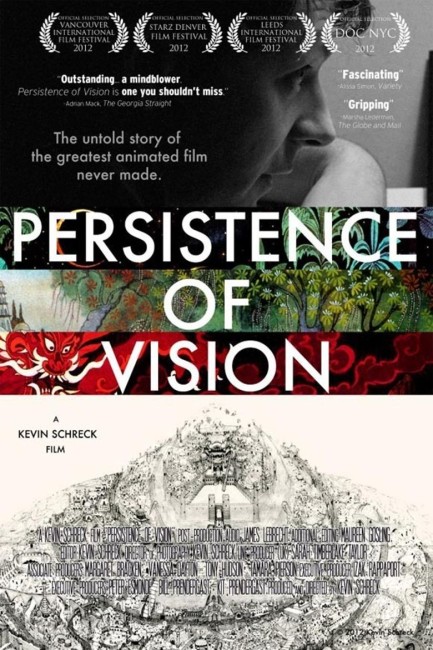 Persistence of Vision is a fascinating documentary about animator Richard Williams and in particular the failure of his life’s work, the animated film The Thief and the Cobbler (1994).

Persistence of Vision follows the story of the Canadian-born Williams as he established an animation studio in London during the 1960s. Williams began to build a core of talent, bringing in several retired Disney and Warner Brothers animators to either work with or coach his crew. We get interviews with many of Williams’ employees during this era and a good deal of detail about the studio’s working processes. We also get some amazing in-depth behind-the-scenes footage of Williams and his team at work during the 1960s, 70s and 80s – even a screening of the very first animated film that Williams made in school. Though Richard Williams declined to be interviewed and refuses to talk about The Thief and the Cobbler to this day, the extensiveness of the coverage here is such that it is hard not to believe that he and his people did not aid the production in some way.

The origins of The Thief and the Cobbler are traced to Idries Shah, a Middle Eastern translator whose brother Omar worked as Williams’ accountant. Idries hired Williams to illustrate the publication of a series of translated books of the morality fables of the legendary mullah Nasrudin. Out of this, Williams began to conceive an animated adaptation of the books and then his own film (after Omar Ali-Shah was fired for financial misappropriation). In the early 1970s, this evolved into what would become The Thief and the Cobbler. Williams’ company would create animated commercials or credits sequences where profits from these were ploughed back into The Thief and the Cobbler, which his crew would working on in their downtime.

Throughout this period, Williams gained several hundred awards for his commercials work, as well as an Academy Award for his short film adaptation of A Christmas Carol (1971). Oddly, the one film that is never mentioned at all in Persistence of Vision is Richard Williams’ one other feature film Raggedy Ann and Andy (1977). The documentary sees how Williams gained a name after being hired to do the animated sequences for Who Framed Roger Rabbit? (1988) – we get to see some behind-the-scenes footage of Williams and team at work on Roger Rabbit – and how the huge success of that film allowed him to gain financing from Warner Brothers to complete The Thief and the Cobbler.

It was The Thief and the Cobbler‘s attaining studio funding from Warner Brothers in 1990 that proved its undoing. As is pieced together in the film, Williams had an extraordinary ambition in the degree of work that he had placed into the film – individually hand-animating hundreds of figures in armies on the march, vast tessellated patterns and optical illusions that the characters run through, escapades through enormous mazes of cogs and machinery. Some of the initial test footage is screened and is amazing (although may not necessarily seem the case today to those who come to it jaded by modern CGI animation and fail to understand that every frame was hand drawn).

It is however Williams’ demanding standards and work pressure on his crew that ended up causing the collapse of the film. Everyone seemed happy with the work regimen but, as is gradually revealed, Williams seemed obsessed with pushing his vision and the limits of hand drawn animation further and further and was unconcerned with constraints like timetables. Or even for that matter small matters like stitching these amazing sequences together inside a plot – as is revealed at one point, it was only when the pressure of deadlines came that Williams considered having to storyboard and unite unfinished sequences. The documentary also goes into how much of Williams’ ideas were stolen by Disney’s Aladdin (1992).

The film’s doom came in 1992 when the completion guarantor stepped in and closed down production. The job was handed over to a South Korean animation house and the film drastically recut with the addition of songs, a romance and the two central unspeaking characters being given voices in order to make it a more commercial film. This also involved the curtailment of many of Williams’ much more elaborate sequences and the film being patched together with work that did not come near his style and complexity. It was finally released by The Weinstein Company as Arabian Knight in 1994 (although was also released as The Thief and the Cobbler in some territories), where it flopped and was consigned to a quick death on video.

The butchered film still looks magnificent as it is – you can only shed a tear and wonder how much more so the original vision would have been if it had been allowed to emerge as it was conceived. (There is The Recobbled Cut, an unofficial fan edit in existence that pieces it together from some of the unseen footage and Williams’ test reels that has been seen in successive more extensive versions since 2006). Although, as one of the former staffers notes in respect to Williams’ constant creative procrastination: “What type of film would it have been if he’d finished it? Could he have finished it? We’ll never know.”

We finally get to find out what the now 78 year-old Williams has been doing since 1994 – lecturing on animation in various classes around the world and creating a series of instructional videos for animators The Animators Survival Kit. Williams also recently released a new short film Circus Drawings (2010) that he had been planning since the 1960s and is reportedly working on an epic feature-film version of the Greek myth Lysistrata, although he had failed to go anywhere with this at the time of his death in 2019.