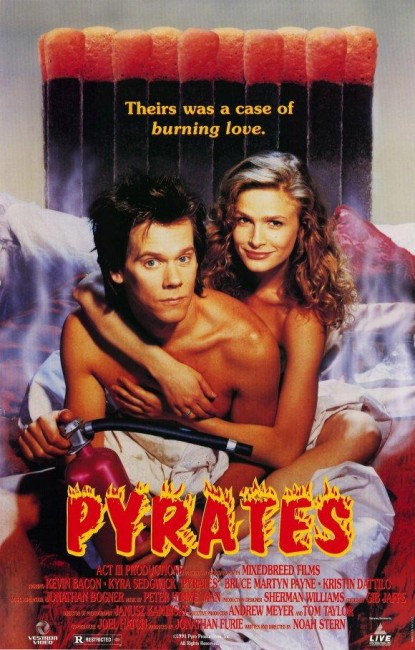 Ari and Sam meet in a Chicago nightclub. They have sex on the fire escape, only to accidentally start a fire. The two move into an intensely passionate relationship but find that their unique biochemistry has a habit of igniting fires every time they have sex.

The late 1980s/early 1990s offered up a peculiar mini-spate of films about pyrokinesis – the ability to start fires with the mind. This started with the Stephen King adapted Firestarter (1984) and carried on through other films like Nice Girls Don’t Explode (1987), Spontaneous Combustion (1990), She Starts the Fire (1992), Wilder Napalm (1993) and Cross Fire/Pyrokinesis (2000), and on tv in The X Files episode Fire (1993), the Smallville episode Plastique (2008) and the Fringe episode The Road Not Taken (2009). Pyrates is a real oddity amid this mini-fad.

Pyrates was made by debuting writer-director Noah Stern and fashioned as a vehicle for real-life husband and wife Kevin Bacon and Kyra Sedgwick. It is not long in until one starts to feel annoyed with Pyrates. Noah Stern’s dialogue comes with a deliberately forced effort to seem zany and wacky. Pyrates feels like a film where Stern is trying to be culty but where the very self-consciousness of his effort obliterates any actual results. The dialogue often seems silly. Case in point being where Kevin Bacon proclaims his love for Kyra Sedgwick: “I love being with you more than Frango Mints, ESBN and REM’s first two albums,” or her confessing to her shrink that “My relationship with Ari is like my relationship with God – I don’t see much of either but I have faith that they are there.”

The film is filled with deliberately silly images – Bruce Payne sitting in bed with a girl while wearing a miner’s helmet, or Kevin Bacon preparing to leap into bed wearing a football helmet and jockstrap or a priest’s collar. Kyra Sedgwick for some reason gives a monologue to the camera while wearing a hat with a giant slice of plastic cheese on it. Very occasionally this proves amusing: “My dreams are like directed by David Lynch,” Kevin Bacon says at one point, “They make Blue Velvet [1986] look like National Velvet [1944].” There is a certain cleverness to one piece of writing where pirates are used as a metaphor for the couple’s relationship, where both are seen as pillaging and setting everything on fire.

For those coming to see a film about pyrokinesis however, Pyrates is disappointing. At best, the firestarting is merely a metaphor for intense passion. And once the film starts to get into the problem aspects of Bacon and Sedgwick’s relationship – that is to say for the latter half of the film – the firestarting element is entirely forgotten about. In fact, Pyrates could easily have worked as well without the firestarting element, just showing a couple that have intensely passionate sex.

The film also treads an uncertain line as to what is happening when the fires are started. Sometimes it seems to construe entirely mundane accidental reasons for all the firestarting – they just happen to knock things over – at other times not – that it is their unique chemistry in combination that ignites fires – but never clarifies which is the case.