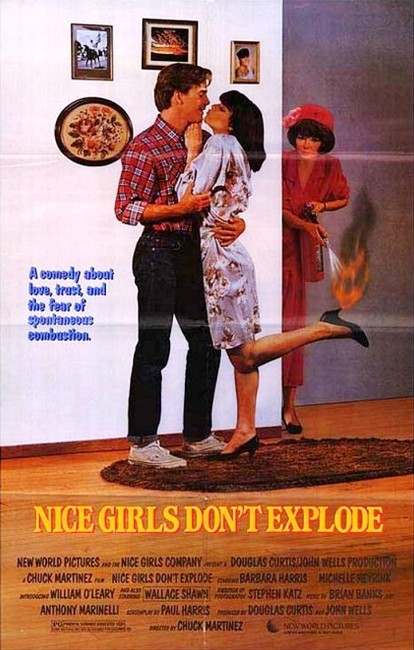 Teenager April Flowers has difficulty dating because she spontaneously starts fires whenever she becomes emotionally excited. Taking ice baths and controlling her heartbeat seem to do nothing to control the issue. What April is not aware is that the fires are in fact being caused by explosives remotely detonated by her over-protective mother. April then meets up with her childhood friend Andy Muckle and he asks her out on a date. Mrs Flowers’ explosive is accidentally crushed when April and Andy kiss and April takes this as a sign. Mrs Flowers then sets out determined to get rid of Andy any way she can.

This is a wonderfully dotty little comedy I have always had a liking for since I saw it on tv during the mid-1990s. The film is one that almost nobody has heard about – it died at the box-office when it came out, earning only $65.000. Director Chuck Martinez has never been heard from again.

This film is a very funny take on Firestarter (1984) – that and the 1980s teen dating movie. When it came out, Firestarter spawned a genre of pyrokinesis films – Nice Girls Don’t Explode was the first of these and the next few years saw the more serious likes of Spontaneous Combustion (1990) and the excellent Japanese Cross Fire/Pyrokinesis (2000), as well as various episodes of tv series such as The X Files’ Fire (1993), the Smallville episode Plastique (2008) and the Fringe episode The Road Not Taken (2009). Surprisingly, even more prevalent have been a number of films that have played the idea for comedy – Pyrates (1991), the Hong Kong film She Stars the Fire (1992) and Wilder Napalm (1993).

There isn’t a lot to Nice Girls Don’t Explode, just its charmingly straight-faced sense of humour and drolly absurd plot complications. Chuck Martinez serves up a bunch of delightful sight gags – as Michelle Meyrink heads out the door on a date, mother Barbara Harris asks “You’ve got protection?” and then hands her a fire extinguisher; Michelle Meyrink’s cartwheels of joy at not setting a fire when she first kisses William O’Leary; her drying her tears with the cat’s tail.

The dance sequence is a mini-masterpiece of understated deadpan – a closeup shows Michelle Meyrink getting her fire extinguisher out of her purse as date James Nardini starts undoing her buttons and she calmly extinguishing the burning objects in the restaurant as they pass with each movement of the dance, or the explosion of her date’s car in the background as they kiss goodnight. It is a film that comes with a wonderfully nonchalant deadpan tone and sustains it right throughout.

Things get a little silly by the end but it proves a charmingly insubstantial ride while it lasts. There are wonderful lines – Michelle Meyrink bemoans: “The only men I ever see more than once are the firemen.” Or Michelle Meyrink’s rant “How can you ruin my life and do all those terrible things to me?” and Barbara Harris’ plaintive shrug – “I’m your mother.” There is also a rather well chosen soundtrack, like the scene where Barbara Harris bakes her explosive to the highly amusing accompaniment of a rendition of I Don’t Want to Set the World on Fire.

Michelle Meyrink was an Almost Ran face of the 1980s in assorted roles in films like Valley Girl (1982), Revenge of the Nerds (1984), Real Genius (1985) and One Magic Christmas (1985), before disappearing off the map to study Buddhism and then start an acting studio in her native Vancouver. Barbara Harris is perfect as the mother. She is another actress who should have been more famous than she was. Starting as a stage performer (in a company founded along with Mike Nichols and Elaine May), she appeared in various films such as Nashville (1975), Alfred Hitchcock’s last film Family Plot (1976) and an hilarious role as a bodyswapped Jodie Foster in Freaky Friday (1976), among others.