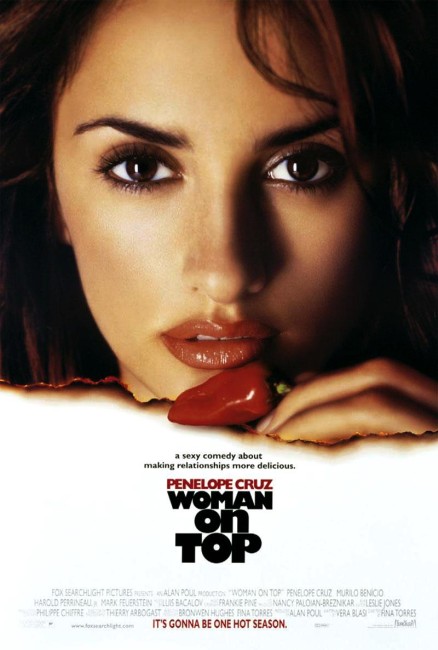 In Baija, Brazil, Isabella, a brilliant chef, falls in love with and marries mariachi Toninho Oliveira. They open a restaurant together but she becomes unhappy with Toninho always entertaining the guests while she has to work unseen in the kitchen. Isabella also suffers from motion sickness and can only retain her sense of balance when she is in control – such as being behind the wheel of the car or making love on top. She then finds Toninho with another woman and so leaves for San Francisco. Moving in with her drag queen friend Monica, Isabella conducts a ceremony with the sea god Yemanja to banish her love forever. Her magical coffee blend enchants men everywhere and tv producer Cliff Lloyd offers her a cooking show, ‘Passion Food Live’, which becomes an instant hit. Toninho then comes searching for her. She is drawn between his agonised apologies and her determination to be free of him, and the attentions of Cliff. When Toninho turns up on her broadcast, much to her chagrin, the producers want to include him as part of the show.

Woman on Top is a venture into Magical Realism. Magical Realism is a genre that originated in Latin America. Usually, although not necessarily, it is a romantic genre that founds itself in improbable melodramatic coincidence and a larger-than-life romanticism where magic, fate and divine intervention forms a regular part of life, hence the term Magical Realism. Western attempts to broach the genre have emerged with variable consequences, from flops like The House of the Spirits (1993), Simply Irresistible (1999) and Chocolat (2000) to passable entries like The Milagro Beanfield War (1988), The Butcher’s Wife (1991) and Rough Magic (1995) – but none that are truly standout.

With Woman on Top, Western producers have made the sensible choice of importing a genuine Latin America director – in this case, Venezuelan-born Fina Torres. Fina Torres has previously made Magical Realist entries such as the Gothic film Oriana (1985) and Celestial Clockwork (1995). The latter has many similarities to Woman on Top – both have a similar giddily effervescent style and the central plot of a woman who packs her bags, leaves her marriage and travels to another country where all are in awe of her special gifts.

Woman on Top is far more overtly fantastical than Celestial Clockwork was. In what is rapidly becoming a recurrent theme within Magical Realism, the central character is able to invest cooking with emotions – see also Babettes Feast (1987), Like Water for Chocolate (1992), Simply Irresistible, Chocolat and The Mistress of Spices (2005). Fina Torres throws in other fantastical touches such as having a single drop of Penelope Cruz’s sweat bringing a flower to life and lilies standing erect when she passes, her coffee brew wafting across the city and causing men to helplessly follow her en masse, or Murilo Benicio’s idle curse against the sea god Yemanja causing a nation’s entire fishing to stock to vanish and reappear inside a painting.

Fina Torres is also a fag hag. There is something of the flamboyant giddiness of Pedro Almodovar to her work. Celestial Clockwork had the subversive notion of featuring four love stories, three of which were same sex. With Woman on Top, Torres has toned it down somewhat, probably because she is making an American-financed film. (The same conservatism also seems to be forcing her to cut back on the sensuality in the flashback love scenes between Penelope Cruz and Murilo Benicio). Woman on Top does however feature one character who is a drag queen (played by Harold Perrineau Jr, later of tv’s Lost (2004-10), who steals much of the film) while at the ending, the rejected of Penelope Cruz’s two suitors finds his true love with said drag queen. Plus of course the film’s principal location is San Francisco, the gay mecca of the USA. (Although, as a current resident of the city, this is clearly a fantasticised version of San Francisco – Monica’s apartment is located on Fillmore St, which is somehow within spitting distance of both the Financial District and Lombard St, locations that are all quite aways apart in actuality).

Woman on Top was Spanish actress Penelope Cruz’s breakthrough into the American mainstream as a lead actress. Here Cruz has a quiet, almost camera-shy beauty. She never fills the screen with her presence but when the camera is focused on her and her alone – whether confronting Murilo Benicio with plain simplicity or explaining the passion of cooking – Cruz captivates and holds the screen and you see just what magic it is that Fina Torres is talking about.

Woman on Top is in the end predictable. When Penelope Cruz cooks a cake and irretrievably buries her love at the bottom of the ocean, you know she is going to have to go and reclaim it. And, considering the lack of real sparks that fly with her other love, there is no real surprise when she goes back to her original suitor. When she makes the decision to quit her cooking show, it is not a decision that comes with any dramatic difficulty – the suits that try to change the show are only introduced a scene before and the contest is so black and white that Cruz cannot possibly be conflicted. Everything turns out expectedly and happily for all concerned without anyone having been placed through too much of an emotional wringer. For all that, Woman on Top is a film that has a certain charm and magic and is undeniably likable.

Fina Torres subsequently returned to frothy romance with magical realist elements in the likes of Havana Eva (2010) and Liz in September (2014), although these have not had high profiles.