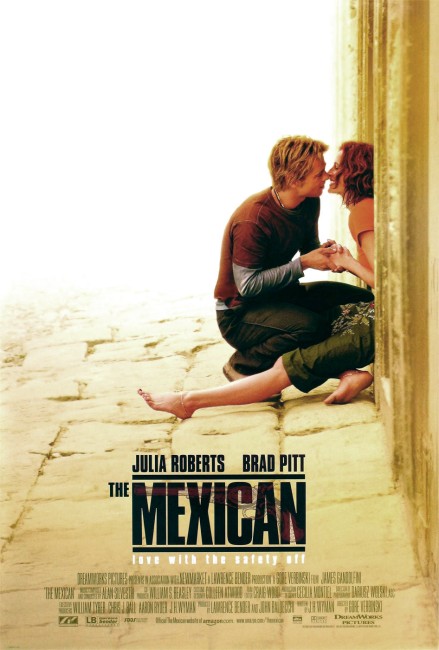 Jerry Welbach and his girlfriend Samantha are always fighting. Jerry works for a local Mafia boss where his bumbling is barely tolerated. He is given one last chance – to go to Mexico and retrieve an antique pistol known as The Mexican on behalf of a crime boss who is just about to be released from jail – if he fails, he will be killed. Calling Jerry selfish, Samantha walks out on him to go to Las Vegas and be a waitress, only to be abducted by Leroy, a sexually conflicted hired killer who wants to ensure that Jerry returns the pistol to his people. In Mexico, Jerry obtains the pistol, only to find that it is cursed and kills every wielder. Things rapidly go wrong, with the pistol, Jerry’s passport and vehicle being stolen and he propelled from one disaster to the next in his attempts to find them and return home.

The Mexican came with exactly the reactions that one expected it would have – the kneejerk critics jumped on it as a piece of packaged product, most obviously for the romantic pairing of its two stars, and pulled at obvious things like a plot that requires the two of them to be kept apart for the greater part of the film’s running time. Audiences everywhere ignored the critics and turned The Mexican into a modest hit.

The Mexican is certainly commercial product. It is well polished product too, although this is in spite rather than because of its two stars. Not to denigrate either Brad Pitt or Julia Roberts – both can do some fine acting work when they want to – see Brad in Kalifornia (1993) and Julia in Erin Brokovich (2000), although she does do too much of this light romantic comedy. It is just that The Mexican is never likely to rank among either’s best performances. She does a Sandra Bullock type-thing, getting flustered and having random, never too coherent outbursts that we are supposed to find cute.

Brad does a variant on his role in Meet Joe Black (1998). Someone should tell him that comedy is not his thing – he feels strained in the part of a klutzy, would-be tough guy. This is a Ben Stiller role (indeed Stiller was originally slated to star). You just keep thinking that any Mob head that would assign a bumbling, clueless dick such an important task would have to be a little daft himself.

The film’s biggest problem is that two central characters are annoying. Indeed, you could see the film’s keeping them apart for the greater part of the story as judicious, for when they are together there is no passion generated, only an overly loud comic riff on the idea of them getting mad with the other without realizing how much they love the other.

The film’s saving grace is James Gandolfini. Many other actors would have regarded this as a throwaway supporting part but James Gandolfini, who at the time was the reigning tough guy in tv’s The Sopranos (1999-2007), gives the part subtlety and shading. His divided sexuality ends up becoming the heart of the film, far more so than the light fluff of Brad and Julia’s reconciliation ever does. As in The Sopranos, Gandolfini’s large, slightly blank face proves one filled with surprising softness and quiet-spokenness – he defies the very tough guy roles he is cast in.

For all the criticism lumped on the lightness of the script, the flips between the two concurrent stories is dextrously handled – the film feels like a novel that keeps alternating chapters between two protagonists. At times, The Mexican comes quite close to Nurse Betty (2000), which came out a few months earlier. Director Gore Verbinski, whose previous film was the live-action Tom and Jerry film MouseHunt (1997), also for DreamWorks, does a fine job with the action set-ups and comedy, not to mention has a good eye for the expansive Mexican countryside.

(Nominee for Best Supporting Actor (James Gandolfini) at this site’s Best of 2001 Awards).