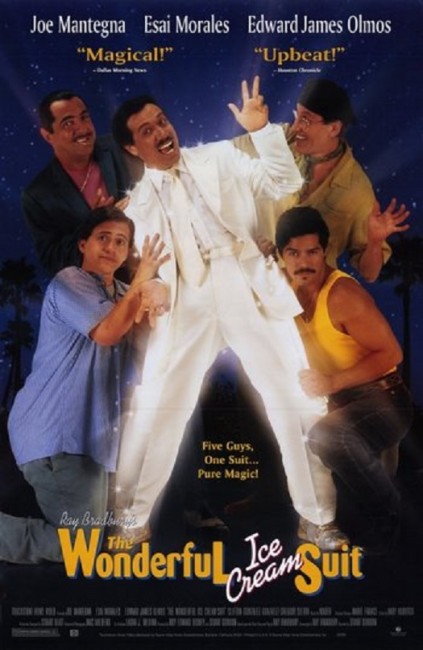 Martinez is pursued through the streets to be recruited for a mysterious scheme by three men, Gomez, Dominguez and Vilanazul. After measuring and weighing him, they decide he is perfect for their needs and tell him of their scheme to pool their financial resources and buy a fabulous ice-cream white suit in the window of a clothing store. Contributing twenty dollars each, they are still short of the $100 they need to purchase the suit and so turn to the wino Vamanos for the remaining $20. They buy the suit and each of them is transformed once outfitted in its fabulousness. Dominguez becomes a mariachi who has women falling at his feet wherever he sings; Vilanazul gains the charisma to sway crowds as a public orator; while Gomez is successful in wooing Celia, the girl of his dreams. However, when Vamanos tries to suit on and immediately goes out drinking at a bar where he attracts the attentions of a woman with a violently jealous husband, the others are fearful that the suit will be damaged.

The late Ray Bradbury (1920-2012) was one of the handful of science-fiction and fantasy writers who was able to cross over into  mainstream popularity in his day. He enjoyed considerable success with novels such as Fahrenheit 451 (1953), Dandelion Wine (1957), Something Wicked This Way Comes (1963) and short story collections such as Dark Carnival (1947), The Martian Chronicles (1950), The Illustrated Man (1951), The Golden Apples of the Sun (1953), The October Country (1955) and I Sing the Body Electric (1969). Bradbury wrote several screenplays and was adapted to film and tv on a number of occasions – see below for a full list of his filmed works.

The Wonderful Ice Cream Suit is based on Bradbury’s short story The Magic White Suit (1957) that appeared in The Saturday Evening Post. Bradbury later expanded the story as the play The Wonderful Ice Cream Suit, which was first staged sometime in the 1960s and is published in the collection The Wonderful Ice Cream Suit and Other Plays (1972). The story was adapted to the screen before as an episode of the live tv series Rendezvous (1959-61) starring F. Murray Abraham. A production of the play was first seen by Stuart Gordon in 1974 who subsequently went on to become a film director with Re-Animator (1985) and a host of other horror films (see below) and then endeavoured to get a film version off the ground.

The surprise about watching The Wonderful Ice Cream Suit and then contrasting it to original versions of the story is to find that they are non-fantastic stories. The film gets inclusion here for the simple reason that it is Magical Realist in nature – in placing it on, the suit variously causes the wearer to develop incredible charisma and sexual attractiveness, oratory skills or become honest, while the wearer is even frequently seen glowing. No cause is ever attributed to this, either in terms of magic or any other explanation.

I anticipated The Wonderful Ice Cream Suit, it having attracted some good reviews on the web. On the other hand, it began to sink into bad movie stakes from fairly much the moment it opened. The principal and sole reason for this is that the film trades in racial caricatures. Bradbury claims these were based on figures he knew growing up in East L.A.. It is never stated which country the various Latino men depicted come from but all of them are shown as having broad accents and being highly excitable to the point of resembling a group of chickens running around with their heads cut off. I presume the various Latino actors were okay with these portrayals (or unaware of how the finished result was going to come out on screen). However, that gives no excuse for Italian-American Joe Mantegna, the most manic over-actor of the group (at least until Edward James Olmos starts staggering around a bar and the streets in the latter sections) who plays to the worst type of caricature.

Between Ray Bradbury’s dialogue at its most overripe and florid – not to mention his writing the men as bad caricatures rather than actual characters – and the cast who are allowed their heads, the film sinks. Although one of the worst parts about the film is Stuart Gordon’s direction. Gordon is a director to whom subtlety was never a concept. His horror films frequently collapse into ridiculous over-the-top effects and ill-timed black humour. His handling here often reads as rank amateurism. The worst scenes are surely the climactic ones with Edward James Olmos up against a car in the street where Gordon has seen fit to outfit the convertible with a set of horns on the hood and has it stopping to huff steam from its engine and chase Olmos about. Aside from the fact that a convertible acting like a bull looks ridiculous, the idea of turning the street scene into an impromptu mock bullfight is surely another racial cliche that Gordon has suborned.

Other Ray Bradbury screen adaptations include:– the classic atomic monster movie The Beast from 20,000 Fathoms (1953) from Bradbury’s short story The Foghorn (1951); the alien invader classic It Came from Outer Space (1953) from his original screenplay; Francois Truffaut’s adaptation of Fahrenheit 451 (1966); the anthology The Illustrated Man (1969); the tv mini-series The Martian Chronicles (1980) from his classic book; the tv movie The Electric Grandmother (1980); the screenplay for the fine Something Wicked This Way Comes (1983) from his own novel; his screenplay for the animated adaptation of the classic comic-strip Little Nemo: Adventures in Slumberland (1989); the tv anthology series The Ray Bradbury Theater (1986-92) where Bradbury adapted his own stories and hosted the series; the screenplay for the animated children’s film The Halloween Tree (1993); A Sound of Thunder (2005) based on Bradbury’s classic time travel story; Chrysalis (2008) where a man mutates into another lifeform; and the tv movie remake of Fahrenheit 451 (2018).