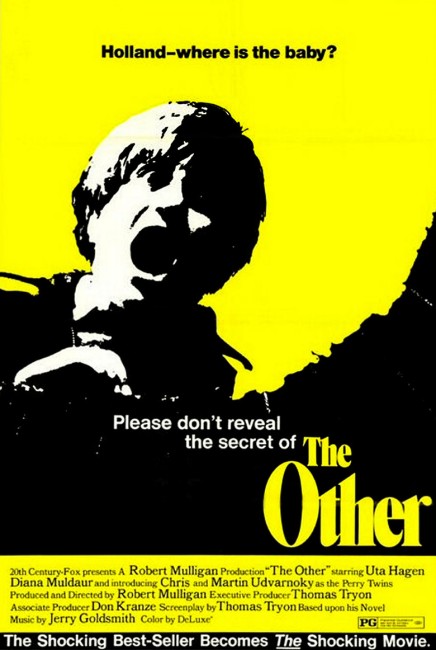 In rural New England in the 1930s, two twin brothers, Niles and Holland Perry, cause mischief together – the diabolical Holland always causing trouble and leaving Niles to clean it up. However, the two hold a terrible secret, one that drives Holland to murder as its exposure is threatened.

The Other is a film that was regarded as a minor genre classic in its time. Its eminence has faded somewhat three decades later but it is still a strong and interesting work. It comes adapted from a 1971 novel by former actor Thomas Tryon – see the likes of I Married a Monster from Outer Space (1958) and Moon Pilot (1961) – who later became a novelist specializing in American Gothic. Probably the most famous other work adapted from Thomas Tryon’s books was the tv movie The Dark Secret of Harvest Home (1978).

The film’s classic status comes from its sudden twist revelation about the twins’ identities halfway through. At the time, it was a big surprise. [SPOILER ALERT]. Although seen today it is a surprise very similar to the twists conducted by films like The Sixth Sense (1999) and Fight Club (1999), while it was outrightly borrowed by other films such as Seeing Heaven (2010) and Goodnight Mommy (2014). (The Other could not have helped but have been an influence on M. Night Shyamalan in The Sixth Sense). The principal difference is that both The Sixth Sense and Fight Club have other stories going on that distract one up until their sudden reversals. The Other does not and it is not terribly subtle about what is going on – the two twins are never in the same shot when dealing with other people and one is perpetually hiding in the shadows.

After the big twist comes, the film certainly gets more interesting with all sorts of sinister things happening that leave one not sure where they are at. Director Robert Mulligan underlines the action with sinister imagery – a baby being abducted and drowned in a jar, a finger severed from a corpse with a pair of rose shears, a lamp left in the baby’s crib. The end of the film contains a final twist that, while sinisterly effective, is puzzling – it contradicts the big surprise revelation earlier, leaving one unsure as to whether there were two twins or not after all.

The Other was the only genre film from Robert Mulligan. Mulligan had risen as a director in the early days of live US television and gained a name with films such as To Kill a Mockingbird (1962 for which he was nominated for a Best Director Academy Award, Inside Daisy Clover (1965), Summer of ’42 (1971) and the subsequent Same Time, Next Year (1978) and Clara’s Heart (1988).