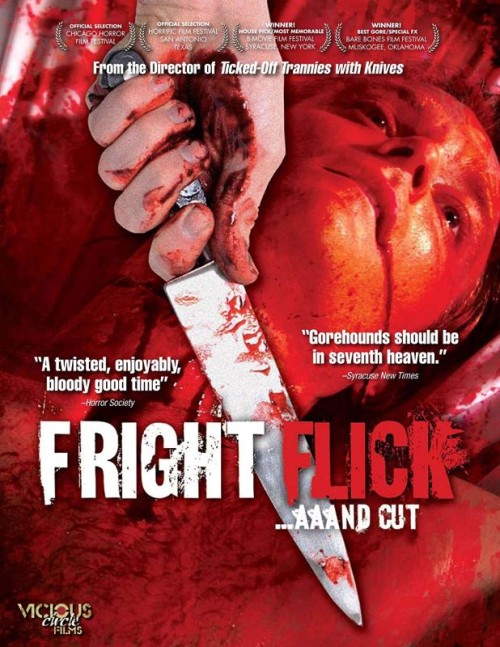 On the set of the low-budget slasher film ‘Fright Flick’, people resent the director Laurent having cast the talentless Debbie as the lead actress solely because of her big chest. Debbie is then attacked and killed in her room, although her body is never found. Two years later, the same film crew sign into a motel to make ‘Fright Flick Part 3’. There are resentments among the crew, including the accusation that Laurent has plagiarised the idea for the original film’s script. As shooting begins, a mystery figure begins killing the film crew one by one.

I was introduced to Dallas, Texas based director Israel Luna with his fourth film Ticked-Off Trannies with Knives (2010), an hilarious and well-crafted low-budget effort about a group of transvestites taking revenge against a sadistic tormentor. Earlier, Luna debuted with the horror film Is Anybody There? (2002) and went onto non-genre works such as The Deadbeat Club (2004), a portrait of aimless smalltown youths that Luna based on his own childhood, and R U Invited? (2006) about a gay gangbang and subsequently going onto The Ouija Experiment (2011), The Ouija Experiment 2: Theatre of Pain (2014), Dead Don’t Die in Dallas (2019) and Ouija Warehouse (2021), while he has also produced Charlie Charlie (2016). Fright Flick was originally shot in 2007 but only received a dvd release in 2011.

Israel Luna is an openly gay filmmaker and most of his films directly deal with this in some fashion, although they also sit outside the Queer Cinema niche and seem aimed at mainstream crossover appeal. Fright Flick is pitched as a straight slasher film rather than a gay film, for instance. That said, the gay cinema influence sits not far removed from it. The low-budget film being shot seems to have an inordinate number of gay characters on the set – I cannot exactly estimate the real-life percentages of gay people you would find on the average film set but it seems far higher here than you would get in real-life. Not that one has any objections to this at all but you get the impression that Luna cast the film with friends and acquaintances, resulting in even the nominally straight characters – the married director (Richard Curtin), the new set P.A. (Tyler Brockington), the frustrated assistant director (Jon Paul Burkhart) – being played by gay actors who come off as being unable to act straight. There is almost no scene, for instance, that seems to go by without some character tossing in an innuendo or catty retort.

From the outset, I anticipated that Israel Luna was going to do something clever with the slasher film and subvert expectation. It is what we expect of our slasher films in this post-Scream (1996) era. Only this never seems to transpire – Fright Flick is played as a straightforward slasher film the entire way through, while the slasher-movie-on-a-slasher-movie-set comes with almost nothing in the way of meta-fictional bending or parody of the form.

You get the impression that Israel Luna was more interested in depicting the bitcheries and backstabbings that go on behind the scenes in the making of a low-budget film. There are various despatches but little of any note. Israel Luna does at least throw in several topless women – something that has notedly been lacking in the mainstream-released slasher films of the 00s – but all of these are absurdly silicon-enhanced where Luna appears to be poking clear ridicule at their inability to act.

The eventual revelation of the identity of the killer – one borrowed from Friday the 13th (1980) in terms of identity, motivation and almost identical means of despatch – relies on a series of plotting points that are so contrived as to be absurdly improbable.