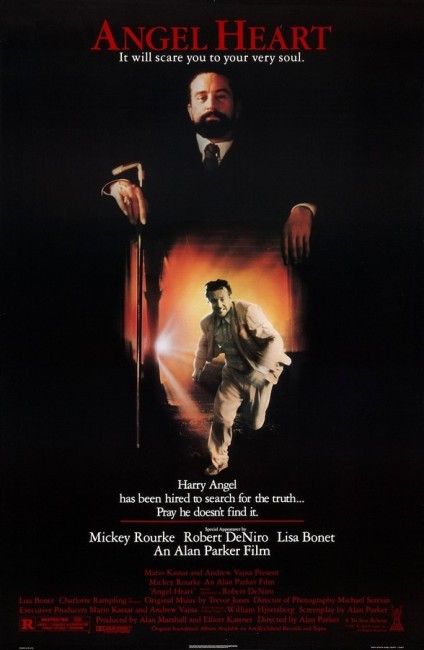 New York City, 1955. Private detective Harry Angel is hired by the mysterious Louis Cyphre to find singer Johnny Favorite who signed a contract with Cyphre but disappeared before Cyphre could foreclose. As he follows Favorite’s trail, Angel finds that every witness is being murdered after he talks to them. The trail leads Angel to New Orleans and into a mystery involving voodoo and the black arts. Finally, Angel discovers that Cyphre is none other than Lucifer. Favorite had signed a contract for his soul with Cyphre but attempted to use the black arts to avoid Cyphre claiming his soul by transferring it into another body.

Film Noir is a genre that began in the 1940s. It took the staple crime films of the previous decade and created an entirely new setting – a world that was dark and shadowy (filled with the cliche images of slatted Venetian blinds, whirling ceiling fans, rain-slicked streets) and where the characters lived on a pessimistic, morally blurred edge (burned-out private eyes, deceitful femme fatales, corrupt cops). The heyday of film noir was during the 1940s and early 50s. It was a genre that largely evolved at B studios in direct contrast to the cleanly photographed and morally black-and-white dictates of the mainstream studios and was soon copied back by the big-budget features. The origin of the term film noir (French for Black Film) is not clearly known, although it was never something that was in use during noir’s heyday.

In this haunting modern film noir reworking, the Humphrey Bogart-styled gumshoe detective story and the old diabolical pact story make fascinating bedfellows. Angel Heart may be the most haunting of all modern film noir quotings – the film is all fans twirling in the breeze, elevators arriving in chiaroscuros of light from behind barred doors, crummy apartments and washed-out Coney Island and Louisiana landscapes. Angel Heart was one of the most dazzlingly photographed films of its entire decade.

Mickey Rourke with shabby demeanour, three-day stubble and perpetually boyish cuteness is an actor born for the gumshoe role. Alan Parker also obtains a casting coup with Robert De Niro as Louis Cyphre. De Niro plays with customary twinkle, something that manages to turn an act as simple as cracking and eating a boiled egg into something sinister. Lisa Bonet, who managed to shake typecasting as the daughter on tv’s The Cosby Show (1984-92) around the same time with her torrid love sequence, fills the requirements of the part passably. Parker manages to turn something as simple as the image of her washing her hair into the earthily erotic.

If anything, the extraordinariness of the atmosphere that Alan Parker piles onto the film belies the slightness of the story, which is essentially a single joke that seems slightly the less on losing the surprise in re-viewing. The ending also holds a certain metaphysical confusion [PLOT SPOILERS] – If Johnny Favorite transferred his soul into Harry Angel’s body, then how come Harry does not know or remember that he is Favorite? Surely if the soul is not the seat of waking consciousness and memory then what can be such a big deal about selling it?