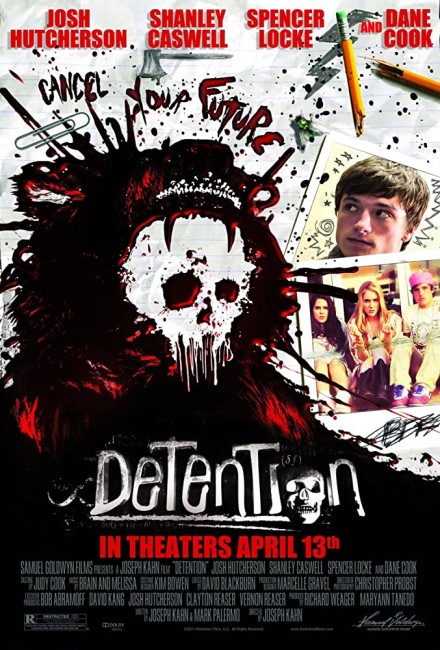 Riley Jones is a nerd at Grizzly Lake High School. She desires her childhood friend Clapton Davis but he wants her best friend, the 90s-obsessed Ione. Clapton’s best friend Sander Sanderson keeps trying to push Riley to be his prom date. Meanwhile, the bully Billy Nolan is determined to kill Clapton. Someone dressed as Cinderhella, the killer from a popular series of slasher films, has killed the school’s most popular girl Taylor Fisher. Cinderhella then pursues Riley but nobody will believe that she is a victim because she is not cool enough. Principal Verge places Riley, Clapton, Ione, Billy and several others in Saturday morning detention on the day of the prom to force them to find which among them is the killer. However, the answer proves more complicated than any of them realise, involving as it does time travel to 1992, alien invasion, swapped minds and a fiendish revenge scheme by one of them that is about to bring about the end of the world.

I must confess to sitting down to watch Detention with low expectations. The plot description and dvd cover seemed to promise a film that had been conceived as a slasher comedy, which is not exactly a genre variant that had produced a whole lot of classics. My expectation was of something akin to Bad Kids Go to Hell (2012) having been crossbred with a slasher film. None of this prepared me for quite one of the most mind-stretching films that I have seen in some time – the nearest comparison one can think to make is to John Dies at the End (2012) having been crossbred with The Dirties (2013). You suspect that the slasher comedy angle might simply be a label that a distributor had pulled out of a hat at random for wont of tearing their hair out

I began to like Detention from its opening scene where the class bitch (Alison Woods) is starting about her day while giving us a series of rules for survival in school a la Zombieland (2009) where the film clearly has its tongue planted well into its cheek and is digging into teen life with scathing regard. Here the screen is constantly popping up with cartoony info-graphics to list the rules or showing us the text messages that she is writing, all before the scene abruptly turns into something akin to the opening of Scream (1996) and is very funnily interrupted by the masked killer who stabs Woods and shoves her body out the window to land onto her waiting mother’s car.

The film then segues into an equally amusing credit sequence moving through the school halls where the credits come printed on everything from the labels on the doors, students’ sneakers, rolls of toilet paper, lockers, the dials of locks, the cleaning sign the janitor puts down, school yearbooks, dents punched in the wall by the school bully and with the director’s name finally forming out of cereal letters vomited into a urinal in the bathroom.

There feels like there is more creativity in the first five minutes of Detention than there was in the entire running time of Bad Kids Go to Hell. Where Bad Kids Got to Hell got off one cute reference to The Breakfast Club (1985), Detention comes with so many 1980s/90s pop culture references that one’s mind is boggling trying to keep track of them all. There are all manner of sly and witty lines/homages thrown in the direction of bands/artists like Oasis, Morrissey and Sting and reference to films and tv like The Karate Kid (1984), Star Trek: The Next Generation (1987-94), Road House (1989), Under Siege (1992) and in particular Scream – “I am not a retarded Neve Campbell,” heroine Shanley Caswell tells a disbelieving police officer at one point.

Parker Bagley’s bully/football jock even becomes a bizarre parody of The Fly (1986), while he also appears to share a name with John Travolta’s bad boy in Carrie (1976). There is the film within a film Cinderhella – which the killer is trying to imitate – that seems construed as a parody of Saw (2004) and sequels. “This is the best movie since Volcano [1997],” says Spencer Locke while watching at one point. Joseph Kahn even gets off digs at his previous directorial outing, the action film Torque (2004) – “makes as much sense as that stupid movie,” one character is heard commenting.

The dialogue comes with a sublime wit. The fun of the film comes in watching whatever demented spin or sarcastic 1990s pop culture reference the film is going throw in next. The script feels like some love child of Diablo Cody and Kevin Williamson having gotten lose on a remake of Scream that also managed to get mixed up with Back to the Future (1985), while inhaling John Dies at the End.

The lines are wonderfully sardonic – “Yes, I care about animals,” says the Canadian exchange student Travis Fleetwood during a debate about vegetarianism vs meat-eating,” that’s why I only eat baby animals” and goes on to give a speech about how killing babies is better than killing ones that have lived longer lives. So much of the film comes with a mocking wit – like the scenes of Shanley Caswell try to hang herself in the school hall at the same time as fending off the killer, or where her claims that she has been attacked are dismissed because she is not cool enough.

The film becomes even more demented and almost wilfully impossible to follow (at least without a second screening) when we finally get the principal characters into detention and everything goes completely insane, including to wit – time travel between multiple eras, a mother and daughter having conducted a cross-time bodyswap, the looming end of the world, alien invasion, a rejected character’s long-hatched revenge scheme and the school bear mascot in the hall revealed to be an alien time travel device. Here tiny details throughout the film manages to be wound in and explained as part of the film’s utterly surreal tapestry where incidents that happened are even revealed to contain characters having time-travelled back and affected events from the margins Back to the Future Part II (1989)-style. Completely demented fun.

The only other film Joseph Kahn has made has been the non-genre Bodied (2017), while outside of that he has been working mostly in music video.