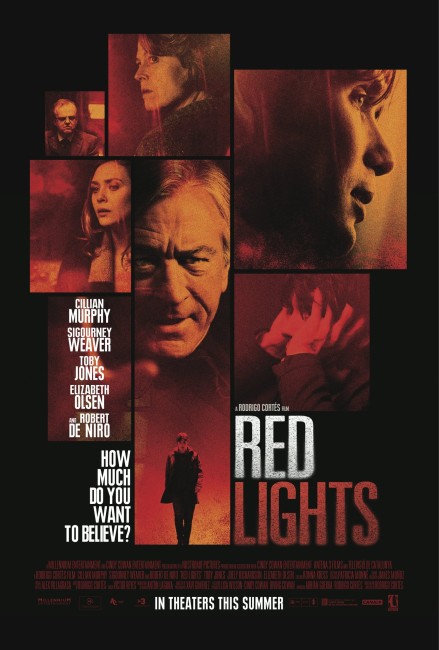 Tom Buckley is assistant to Dr Margaret Matheson, an academic psychologist who investigates and exposes fake psychics and mediums. Margaret rigorously denies the existence of paranormal phenomena. Tom’s attention is intrigued the announced return of the blind psychic Simon Silver. Silver has been absent for thirty years following a performance during which one of his critics died of a heart attack. Tom pushes Margaret to investigate Silver but she is reluctant. Tom realises the two have a history and that Margaret is afraid of Silver. As Tom begins to investigate Silver on his own, a string of mysterious events causes him to believe that Silver’s powers may be real.

I became aware of Spanish director Rodrigo Cortes with his second film Buried (2010), an impressive psychological thriller that spent its entire running time focused on Ryan Reynolds trapped inside a coffin. The camera stayed inside the coffin and Reynolds was the sole person on screen for the duration, with others only being reacted to and drama built via cellphone contact. Buried premiered at Sundance and became a festival acclaimed hit around the world for the uniqueness of its concept. Red Lights was Rodrigo Cortes’s third film. Subsequent to this, he went on to make the Young Adult horror Down a Dark Hall (2018). In the interim, Cortes also wrote the script for Emergo/Apartment 413 (2011), which would appear to exist in similar territory to Red Lights involving the investigation of a haunted phenomenon, and produced the thriller Grand Piano (2013).

Red Lights is a paranormal investigators film. There are a number of other films that have ventured into this territory – see the  likes of 1408 (2007), The Reaping (2007), Book of Blood (2009), The Awakening (2011), Grave Encounters (2011) and The Innkeepers (2011). Like these others, it involves people with a rationalist agenda conducting an investigation into usually a haunted building and finding proof that challenges their scepticism. These films have a fairly standard arc – one that usually begins with the investigators being sceptics and during the course of the story having their assumptions overturned by encounters with a variety of phenomena. In this regard, Red Lights seems no different to these others. Even though it does a scrupulous job in establishing the sceptical side of the equation, the images of birds dying, lights constantly blowing out and Cillian Murphy’s spooky visions of himself gives a clear idea of where everything is heading.

Where I was impressed with Red Lights was in the way that Rodrigo Cortes takes the time to sketch out the sceptical side of the argument. Far more than trying to convince us of the existence of paranormal phenomena, much of the script has been contrived to take us through a series of scenarios that show us how false positives are accidentally achieved in the laboratory or the various means whereby people fake phenomena – from a medium creating table liftings to a healer who conducts supposed readings using information from eavesdropped conversations fed by a microphone and the means whereby people are able to cheat on controlled scientific studies.

I liked Red Lights here for its determination to take a rational stance and debunk a great deal of the mummery and nonsense that occurs in the depiction of paranormal phenomena – whereas most film depictions by implication accept their existence and never question the actuality of such. A perfect example might be FairyTale: A True Story (1997), which is based on a proven hoax but turns the historical account into a fantasy film anyway. The only other work to consistently do so was the tv series The X Files (1993-2002, 2016-8), which always offered a sceptical alternate point-of-view, even if it always came down on the side of fringe science explanations.

There are times that you feel Rodrigo Cortes is skewing drama to make points about phenomena. The reality of the way things occur in the real world is often altered to make dramatic points – the film has the paranormal investigation department of a university being well funded and Sigourney Weaver’s psychology department struggling and underfunded, whereas in reality it is exactly the other way around.

The film has the return of De Niro’s Simon Silver after thirty years become a major headline event covered by all the major networks, whereas in reality psychics have become so devalued in the public eye that it is hard to believe that any network would give them time – the fraud Uri Geller, who Silver is clearly based on, has been absent almost as long but he and the absurdity of his claims holds so little cachet with the public that any reputable news agency would avoid the issue.

The film also has Sigourney Weaver operating with the police department to bust psychics. In reality, while people operating in this arena such as James Van Praagh and Miss Cleo have been repeatedly exposed as fakes, it is only when they conduct blatantly fraudulent schemes to rip the public off that the police get involved. Still there is an undeniable wish fulfilment fantasy in the idea of seeing people like Van Praagh, John Edward and Sylvia Browne busted for preying on the emotions of the bereaved.

The calibre of the cast line-up the film brings together is a measure of the acclaim that Rodrigo Cortes achieved with Buried. These include veteran actors like Robert De Niro and Sigourney Weaver, current younger names like Cillian Murphy and the rising Elizabeth Olsen, as well as supporting turns from other actors like Joely Richardson and Toby Jones who have impressive resumes in their own right. De Niro is in his element and delivers a good old scene-stealing turn in the best De Niro manner whenever he takes the stage. Sigourney Weaver delivers a fine performance – the role she has here is perfectly suited to Weaver’s forte in projecting fierce intellectual strength.

The only point that Red Lights falls down is when it comes to its contrived ending. [PLOT SPOILERS]. A film like this has a pre-established arc – one where the paranormal investigators are drawn into an investigation and find that there is some truth to the claims after all. Red Lights is no different in this regard. It builds up Robert De Niro as an ambiguous figure who is repeatedly called dangerous, while the film misleadingly gives the impression that he is causing various phenomena to start happening around Cillian Murphy. (This is something that is made even more the case by the film’s trailer, which uses selective scenes to build De Niro up as an exceedingly powerful and sinister psychic). The ending then turns around to reveal that it was Cillian Murphy who was the psychic all along. This is a twist revelation that goes way beyond the realms of probability and seems there more to screw with audience expectations of this particular story arc than anything else.