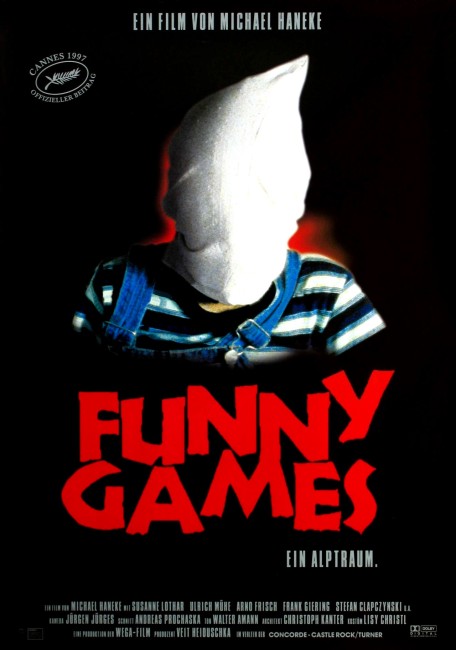 Husband and wife George and Anne Schorber and their young son Georgie head off to their lakeside holiday home. There they are visited by two polite teenage boys, Peter and Paul, friends of their lakeside neighbours, who ask to borrow some eggs. Suddenly however, the boys’ initial friendliness suddenly explodes into violence and a series of prolonged sadistic games.

From the opening credits of Funny Games where a family of three, on a placid drive to their holiday home, change tapes on the car stereo and the gentle sounds of Mozart are suddenly replaced by a loud and raucous blast of death metal, director Michael Haneke signals his intent. Sure to his word, Funny Games quickly shapes to be a film in the mold of Straw Dogs (1971), The Last House on the Left (1972) and The Texas Chain Saw Massacre (1974) wherein the idyll of a middle-class family is savagely overturned by outsiders and descends into a gruelling assault of sadism and torture.

Funny Games begins innocently enough with the introduction of the two boys, both dressed in white sweaters, shorts and plimsolls as though they were preppies returned from a day at the beach. An incident, which is comical in its gaucheness, where Frank Giering asks to borrow some eggs but keeps dropping them suddenly and unexpectedly turns violent. And from that point on, Funny Games becomes a harrowing, psychologically gripping work of terror. (And one that not unfavourably compares to the aforementioned works above).

The scenes of violence come with disturbingly casual regard – the dog and the child are blown away without any of the taboo reticence that affects Hollywood models. The casualness of the violence never comes more coolly understated than the shot focused on tormentor Arno Frisch who hears a gunshot ringing out from the next room while he is in the kitchen making a sandwich and then calmly finishes making his sandwich before going to investigate.

Director Michael Haneke also propels home the full effect of the assault with emotionally gruelling regard – in one shot, the camera remains in a single wide-angle for several minutes focused on a room with a body in one corner shot through the head, its blood splattering the tv, while wife Susanne Lothar sobs in the middle of the room and at the same time tries to drag herself past her grief to make an escape before the boys return. The prolonged effect of the shot is remarkably harrowing.

The film is all the more effective for the performances of the two boys, especially Arno Frisch, who manages to unnervingly swing between a perfect mannered politeness and casual sadism without the slightest change in expression – one moment insisting his tormentees stop screaming and start referring to everybody by their first name, the next breaking people’s legs with golf clubs.

Michael Haneke also manages to be surprisingly playful. At several points he starts to engage in meta-fictional (or should one say meta-filmic?) play and has Arno Frisch directly address the audience – turning to the camera to ask if the audience thinks he is as bad as his victims do; or offering a bet to his tormentees to see if they can stay alive until morning and then turning to ask the audience who they would bet on. At another point, Arno Frisch decides that he will prolong the torture in order to pad the film out to feature length.

In the most amusing scene, Susanne Lothar manages to get hold of the gun and blow Frank Giering away, whereupon Arno Frisch decides that things cannot be allowed to happen that way, scrabbles for a remote control and rewinds the film to just before she got hold of the gun so that he can disarm her. Juggling between raw, disturbing violence and this sort of playful humour is extremely difficult a balancing act to get right without allowing the film to descend to bad taste or campiness, but it is to Michael Haneke’s credit that he succeeds. On a deeper level, it is something that also directly comments on and makes an audience complicit in the violence that they are watching on the screen as entertainment.

Michael Haneke later directed a shot-for-shot English language remake of Funny Games located to the USA with Funny Games U.S. (2007) where the roles of the husband and wife were cast with Naomi Watts and Tim Roth. There was also the Dutch-French Funny Games II (2011) about a tenant being tortured by a homeowner, although that does not appear related to this film.

Funny Games was the fourth film from Austrian Michael Haneke who has since gone onto become a major continental director with increasingly awards-celebrated films such as The White Ribbon (2009), Amour (2012) and Happy End (2017). Haneke’s films often make for uncomfortable viewing, attacking as he does conventional middle-class society and its mores and the complicity of the audience in watching the films. These themes are echoed in other films such as The Seventh Continent (1989), where the characters also have the same names as the family here, where Haneke observes through repetitive minutiae the utter pointlessness of their lives; Benny’s Video (1992) about a boy with a videocamera who is drawn in by the medium to stage violence and murder; The Piano Player (2001) with Isabelle Huppert as a woman who enjoys sexual humiliation; Time of the Wolf (2003) about various people confronting a social apocalypse; and Hidden (2005) where a man’s life is disturbed by a series of mysterious videotapes. Haneke has also made an adaptation of Franz Kafka’s The Castle (1997).

(Winner in this site’s Top 10 Films of 1997 list. Winner for Best Supporting Actor (Arno Frisch), Nominee for Best Original Screenplay at this site’s Best of 1997 Awards).