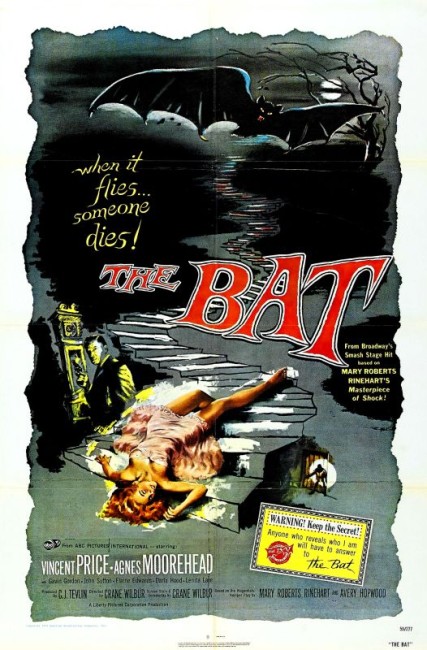 Murder mystery writer Cornelia Van Gorder rents out The Oaks mansion in the town of Zenith. Meanwhile, at the Zenith bank, there is panic when it is discovered that someone has stolen a million dollars worth of bonds. While up at a cabin in the forest, the bank’s manager John Fleming (who is also the owner of The Oaks) reveals to his good friend Dr Malcolm Wells that he has stolen the bonds. Fleming asks Wells’s help in faking his death in return for half the money. Instead, Wells shoots Fleming and leaves the body to be destroyed by an approaching forest fire. At The Oaks, Cornelia and her maid Lizzie are fearful about reports of a masked killer known only as The Bat, who is believed to be in the area. Soon after, they see a masked, clawed figure lurking around the house and dead bodies begin turning up. They realise that The Bat may be one of the guests in the house. At the same time, Wells is ruthlessly determined to find the hiding place of Fleming’s money, which he believes is hidden somewhere inside the house.

The Bat is a story that has been around forever. It started as a novel The Circular Staircase (1908) by Mary Roberts Rinehart, which gained fame when it was adapted into the stage play The Bat (1920). The book had been filmed as the lost The Circular Staircase (1915) and the play was then adapted to film as both the silent The Bat (1926) and a sound version The Bat Whispers (1930). This version of the play was the last screen version made to date.

The Bat play is a classic of the Old Dark House thriller, a genre that was popular on stage in the early 1920s and emerged onto film in the silent era, consisting of a series of pseudo-haunted house thrills that were frequently leavened with comedy. These Old Dark House plays/films always arrived at an ending that contained a mundane explanation and revealed everything to be an elaborate plot being conducted by a super-criminal who usually had the name of an animal and whose true identity was revealed as one of the cast members.

This version of The Bat was made by Crane Wilbur, a playwright and actor turned screenwriter with classics like I Was a Communist for the FBI (1951), House of Wax (1953), The Mad Magician (1954), The Phenix City Story (1955), Solomon and Sheba (1959) and Mysterious Island (1961) to his name. Crane Wilbur’s output as a screenwriter overshadows his work as a director, but he made more than 30 films as a director, although none of them memorable.

The Bat was not one of Crane Wilbur’s better moments. It is a horribly pedestrian film. Wilbur’s camera is frequently static, just as if one is watching a filmed version of a stage play. Wilbur rarely cut shots up or move into a scene to create suspense or atmosphere. He throws in crude shadow lighting effects – a bat flying, figures skulking – but they seem dated effects that well and truly belong to the silent era. It is hard to believe that a film as creaky as The Bat could be made in 1959, sandwiched a year either side of such modern classics as Hammer’s Dracula/The Horror of Dracula (1958) and Alfred Hitchcock’s Psycho (1960).

Considered alongside Roland West’s dynamic direction of both the 1926 The Bat and The Bat Whispers three decades earlier, The Bat makes for the least interesting interpretation of the story possible – there is no suspense, the film is slow and talky with only occasional atmosphere, and Crane Wilbur has bled all the comedy out of the story. One thing that Wilbur does retain from The Bat Whispers and the play is the end coda wherein Agnes Moorehead turns to directly address the audience: “But don’t try it – no matter how clever you are, you can’t hide murder.” Although this time it is the heroine that delivers the warning rather than The Bat.

The Bat stars Agnes Moorehead, a member of Orson Welles’ Mercury Theatre troupe who was probably best known as the mother-in-law Endora in tv’s Bewitched (1964-72). Moorhead gives an arch performance in the lead, which has its amusements. The attention The Bat has in historic retrospect is in starring Vincent Price, although at the time the film was made Price was not quite the horror icon that he became after Roger Corman’s The House of Usher (1960) the following year. The presence of Vincent Price tends to throw the film off somewhat – his usual undeniably villainous overplaying tends to overshadow the presence of The Bat and makes him into the central suspect, even when such eventually turns out not to be the case after all.