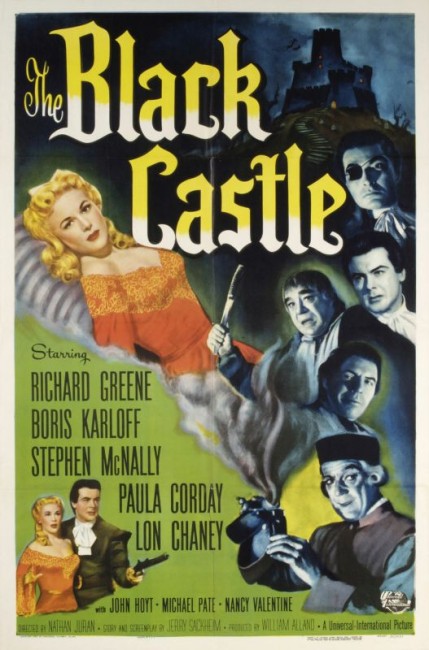 19th Century Europe. Posing as Richard Beckett to disguise his identity, British officer Sir Ronald Burton travels to the estate of Count Von Bruno in Austria. He is seeking answers as to what happened to his two friends who disappeared after going to confront Von Bruno. Burton arrives at Von Bruno’s Black Castle and is welcomed as a guest. He observes Von Bruno’s taste for cruelty in keeping dungeons, a crocodile pit and arranging the hunt of a black panther. He also becomes attracted to Von Bruno’s wife Elga who despises her husband. In searching for the truth about his friends, Burton’s identity is exposed and earns the vengeance of the mad Von Bruno.

The Black Castle was the first directorial film of Nathan Juran. Juran had previously worked as an art director and as a director would go on to become a major genre contributor over the next few years. Juran’s most famous works are polarised by the two films he made in 1958 – the heights of the classic Ray Harryhausen film The 7th Voyage of Sinbad (1958) and the nadir of the Z-budgeted Attack of the 50 Foot Woman (1958). Throughout his career, Juran swung between class studio product and cheap B movies, usually hiding the latter under the name Nathan Hertz. Within genre material, he also made the likes of The Deadly Mantis (1957), Harryhausen’s 20 Million Miles to Earth (1957), The Brain from Planet Arous (1957), Jack the Giant Killer (1962), Harryhausen’s The First Men in the Moon (1964) and The Boy Who Cried Werewolf (1973)

The Black Castle seems an oddity. For the most part, it seems to be sold as a historical costume adventure – even if the adventure never goes anywhere beyond the Universal backlot and costume warehouse. This seems predicated on the casting of Richard Greene, a British actor who had gained a moderate amount of attention as a leading man in a series of costume adventures throughout the 1940s and 50s, hitting his peak as the title character in the tv series The Adventures of Robin Hood (1955-60).

On the other hand, this is clearly a film that has one foot in the horror genre of the 1940s in the casting of Boris Karloff as a doctor who lurks with sinister effect (even if he is eventually revealed as a good guy) and Lon Chaney Jr as a hulking monosyllabic retainer. It is, you suspect, not the best use of either actor but certainly something that nudges The Black Castle into the horror genre.

You also cannot help but think that this would have been a very different film if it had been made only a few years later after Hammer Films, Roger Corman’s Edgar Allan Poe films and the continental Gothic film, which made a virtue of plots with deranged counts lurking around castles and torturing those who came to visit.

With this in mind, The Black Castle only works sporadically as a horror film. You half expect it to take off into The Most Dangerous Game (1932) territory and have Stephan McNally’s mad count start hunting an unarmed Richard Greene with his hounds but instead the drama is centred around the human passions and revenge plots within the castle walls. (What is mildly taboo for the era is the idea of the hero Richard Greene putting the moves on Paula Corday, another man’s wife, although to make this justifiable the film has to write the husband as a mad villain who torments her).

There are some entertaining scenes with Stephan McNally and Lon Chaney Jr cracking a whip at a black panther locked in a cage and all sorts of melodramatic devices such as grille traps, dungeons, deformed servants and even crocodile pits kept in the castle. Not to mention that the film opens on a flashback from a premature burial.