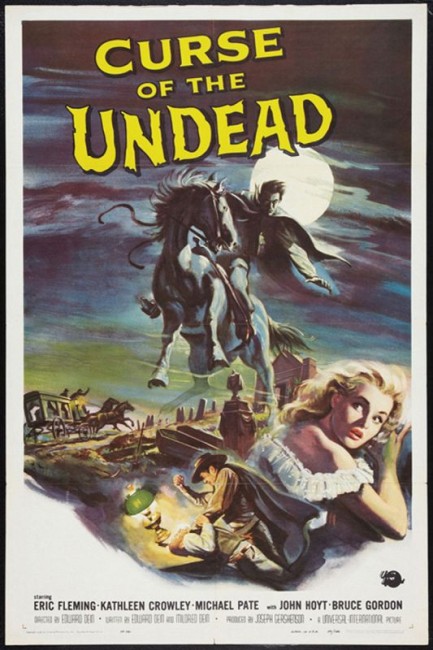 A small Western town is being plagued by a series of mysterious deaths where women are found with puncture marks in their necks. Landowner John Carter is in conflict with neighbouring rancher, the ruthless Buffer, who has shut off water to their land. McCarthy goes to confront Buffer but is killed. His son Tim challenges Buffer, only to end up being shot in a drunken barroom gun draw. Angered, McCarthy’s daughter Dolores posts a $1000 reward to kill Buffer even though her boyfriend, the town’s preacher Dan Young, imprecates her not to. The ad is answered by the gunslinger Drake Robey. Dolores gives Robey shelter at the ranch where Dan takes an instant dislike to him. As Dan discovers, Robey’s real name is Drago Robles, the son of the original owner of the land, who was cursed with vampire condition after murdering his brother. Robey/Robles then develops romantic interest in Dolores, while killing all who stand in his way.

Curse of the Undead had the novelty of being the first vampire Western. Back in 1959, the wilful (and frequently deliberately absurd) genre crosshatching that we have today simply did not exist. Today, for example, Curse of the Undead would have come with much ironic interplay and no doubt have been titled Cowboys vs Vampires. Nevertheless, it started a trend – a few years later we saw the cheapie duo of Billy the Kid Versus Dracula (1966) and its companion piece Jesse James Meets Frankenstein’s Daughter (1966). Ahead would be such vampire Westerns as Sundown: The Vampire in Retreat (1989); avenging ghost/revenant Westerns like High Plains Drifter (1973), Shadow of Chikara (1977), Ghostriders (1987), Ghost Town (1988) and Jonah Hex (2010); two zombie Westerns with The Quick and the Undead (2006) and The Dead and the Damned (2010); cowboys vs troglodytes in The Burrowers (2008) and Bone Tomahawk (2015); and two entire horror Western anthologies with Grim Prairie Tales (1990) and Into the Badlands (1991).

There have also been various science-fiction Westerns – involving time travel in Timerider: The Legend of Lyle Swann (1982), Back to the Future Part III (1990) and the Doctor Who episodes The Gunfighters (1966) and A Town Called Mercy (2012); cowboys up against alien invaders in films like High Plains Invaders (2009) and Cowboys & Aliens (2011); Westerns transposed into outer space in Outland (1981), Oblivion (1994), tv’s Firefly (2002-3) and the Star Trek episode Spectre of the Gun (1968) or into post-holocaust settings such as Steel Dawn (1987) and Omega Doom (1996); various virtual Western scenarios in Westworld (1973) and Welcome to Blood City (1977); and weird mixes that throw in advanced technology and/or Steampunk elements as in Wild Wild West (1999) and the tv series’ The Adventures of Brisco County, Jr. (1993-4) and Legend (1995). (For more detail about genre/Western hybrids, see Weird Westerns).

It is hard to believe today but in the 1940s and 50s, the Western was as popular and far more prolific in its output than the modern action and science-fiction film is. The reason for this was that it fulfilled the function that these films do for modern audiences. It created a fantasy vision of the Old West where simple tales of heroism could play out in which the good guys wore white hats, dispensed justice with six guns and their fists. All of the embryonic heroic types that the action film draws on today – the morally just lawman who stands up for the downtrodden, the ambiguous anti-hero, the decent honest ordinary guy thrust into action – were laid down in the Western.

Curse of the Undead was shot on the Universal Studios backlot, using the standing Western town, sets and warehouse costumes that were also used in dozens of other B Western films of the era. It is even shot with the same typically stolid and unimaginative camera set-ups and flat photography of these B Western programmers. Director Edward Dein occasionally hits onto something more than that. There is a certain rudimentary atmosphere to Michael Pate’s appearances in Kathleen Crowley’s bedroom or stalking around the ranch at night. In one ultra-weird scene, Pate looks in on the funeral procession from behind the grille of a crypt and then after everyone has gone turns and climbs into a coffin. There is a reasonable tension generated during the scene where the drunken Jimmy Murphy provokes landowner Bruce Gordon into a shootout in a bar, which is well driven by the pugnacious dialogue that was typical for the era.

Not having much conception of the way the modern genre melding works to draw from, Curse of the Undead comes out feeling like an interesting experiment that has its feet in two different genres that don’t entirely click together. Michael Pate is not a very vampire-like vampire – he walks around in daylight and at most claims ‘a condition’ where he has to sleep during the day. Rather than a cape and dinner-suit, he has the more routine outfit of jeans, cowboy hat, side holster and leather vest, albeit all in heavily symbolic black. He never seems to demonstrate much in the way of supernatural power other than the ability to remain undamaged by bullets when fired at. Occasionally, there are a couple of moments where Edward Dein hits onto just what the film should have been – a fine scene where Michael Pate’s shadow stalks Eric Fleming through the streets but is driven off when he finds his path blocked by the shadow of the cross from the church. The climax is a perfect blending of the two genres where Eric Fleming confronts Michael Pate in a shootout, killing him by placing a crucifix carved from a thorn grown at the site of the crucifixion on the tip of the bullet.

Michael Pate was an Australian-born actor who played numerous parts in B movies in the 1940s and 50s, becoming a prolific guest star on tv shows of the 1960s, where he was more often cast as an ethnic character, in particular as an American Indian. As the vampire, Michael Pate has a terse and harsh presence, a sense of contained danger that immediately makes him stand out from the rest of the characters around him. The rest of the cast are largely unknown names today. As the priest hero, Eric Fleming looks like a 1950s equivalent of Liam Neeson.

Director Edward Dein had worked as a screenwriter during the 1940s where he had written a number of Westerns. He had also written several horror films, including additional dialogue for the Val Lewton film The Leopard Man (1943) and the screenplays for Calling Dr Death (1943), Jungle Woman (1944), The Soul of a Monster (1944) and The Cat Creeps (1946). He made seven films as director, including two co-directed in Spain. His only other venture into genre material as a director was The Leech Woman (1960) about a rejuvenation process.