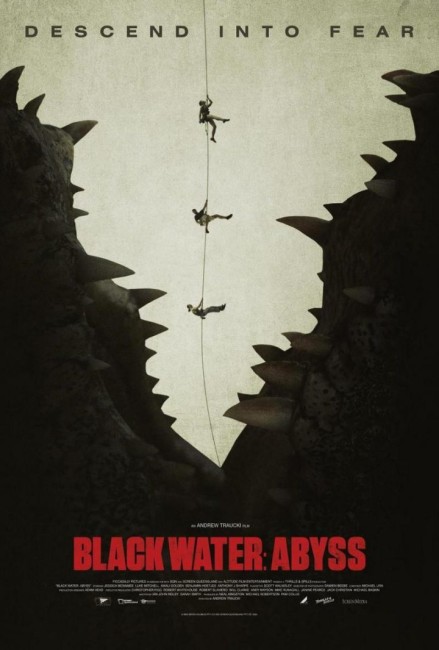 In Northern Australia, two couples, Jennifer and Eric, Yolanda and Viktor, get away for a weekend. Another friend Cash has discovered a new cave that he wants to take them exploring. The group venture into the cave only for it to be struck by a flash flood from a storm outside. As the water levels rapidly rise, the group shelter on ledges on the rock wall. They then realise there is a crocodile inside the cave lurking in the water. However, the way out is now covered under water and requires them having to swim through the waters where the crocodile lurks.

Black Water (2007) was a surprisingly good Australian-made killer crocodile film. The film was shot on a low budget by debuting directors David Nerlich and Andrew Traucki and was made with a remarkable economy – a cast of just three people with all the action focused around them sheltered in a tree from a crocodile lurking in the waters below. All the effects of the crocodile were conducted by shooting at the local zoo and digitally inserted into the rest of the footage. Black Water was eclipsed by the same year’s other high-profile Australian killer crocodile film, Greg McLean’s Rogue (2007), but has been duly recognised as the classic it is.

Subsequent to Black Water, Nerlich and Traucki appeared to part ways. Andrew Traucki went on to solo direct a couple of other survival horror films with The Reef (2010), an excellent filn about a shark terrorising people stranded at sea, and The Jungle (2013), a Found Footage film about a film crew being stalked by a predator, as well as the G is for Gravity segment of The ABCs of Death (2012). David Nerlich has not directed another film – he did work in visual effects for a time but appears to have disappeared off the radar after 2010. Certainly, he is not involved anywhere on Black Water: Abyss.

Black Water: Abyss is a sequel to Black Water made thirteen years after the original and solo directed by Andrew Traucki. It is not a sequel in any sense of continuing on events from the first film. Indeed, Black Water is hardly a film that lends itself to a sequel. It is hard to imagine what is there for any sequel-maker to build on – the same characters menaced by another crocodile a la Jaws 2 (1978)? further adventures of the same crocodile a la the Godzilla films? Traucki subsequently did the same thing, producing an in-name-only sequel to The Reef with The Reef: Stalked (2022).

Traucki however settles for making a repeatquel to which the nearest comparison might be the Final Destination films ie. not a continuation of events but a similar scenario happening to different characters in a slightly different location. In this case we have new characters menaced again by a crocodile but this time trapped inside a cave instead of a tree. The set-up is a not dissimilar one to the recent 47 Meters Down: Uncaged (2019), which was also a repeatquel, although this comes without the extended diving scenes.

Black Water worked extremely well and produced a good deal of tension. I was hoping for the same with Black Water: Abyss despite the fact the film had attracted a bunch of disappointed reviews. Andrew Traucki produces some solid tension in the various scenes with the actors having to swim underwater to find the cave exit and then finding the way blocked and one of the group having his leg trapped beneath a rock underwater; Jessica McNamee’s venturing into the water to retrieve the backpack with the phone in it only to knock her head on the rock as the crocodile comes and the wounded, asthmatic Benjamin Hoetjes being left to rescue her.

Traucki gets some fair-to-reasonable jumps out of these and other scenes. The crocodile becomes in effect like the shark in Jaws (1975) where its presence is denoted only by its occasional appearances gliding through the water or erupting but mostly through the fear and concern of where it could appear. The only complaint during these scenes is the incredibly murky underwater photography. With the better budget the sequel has over the original and the fact the cave scenes were shot in a studio could this not have been better than it is?

On the other hand, while Andrew Traucki gets some okay jumps out of the film, Black Water: Abyss fails to come with the same degree of tension and effect that the first film did. It may simply be that by now the killer crocodile film, not to mention the trapped underground plot, is a familiar one that a number of other films have conducted and that this offers no new variations. It also has a script that seems awfully diagrammatic about signposting elements – the lost backpack with the phone in it, Benjamin Hoetjes and his asthma inhaler. There is also a lame just-when-you-thought-everything-was-over sequence when the survivors get free only to be menaced all over again.

The other distracting aspect of Black Water: Abyss, added over the original, is the attempt to add some human drama. In the first film, there were three friends on a holiday and nothing more complicated than that for the simple reason that the film didn’t need it. This tries to add drama in terms of Jessica McNamee discovering throughout the course of the film that her boyfriend Luke Mitchell has been unfaithful. This adds precisely nothing to the show and feels more like a series of scenes that have strayed in from a soap opera than a set of dramatic scenes that feel convincing being played out in the underground environment.