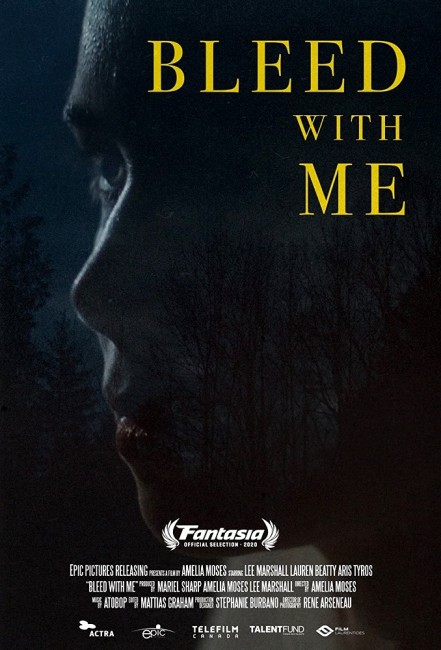 Rowan joins her friend Emily and Emily’s boyfriend Brendan as they go to Emily’s family cabin in the woods for Emily to convalesce. Rowan then starts to wake up in the morning with strange cuts on her arm. As these increase, she comes to believe that Emily might be drugging her and taking her blood.

Canadian director Amelia Moses emerged as a new talent in 2020 with two films. Bleed With Me was the first released of these, appearing in August 2020, followed by her werewolf film Bloodthirsty (2020) in October of the same year.

Amelia Moses conducted her take on the werewolf film with Bloodthirsty and my natural assumption at first glance at the description of Bleed With Me is that it would be her take on the Vampire Film. However, this doesn’t turn out to be the case. Certainly, Bleed With Me has a number of similarities to Bloodthirsty – it is a small chamber drama that takes place among three people at a remote home in the snowy wilderness where the girl protagonist realises that her host may be up to sinister purpose. There is the same brooding inner psychological focus of bad things about to happen. Both films also star Lauren Beatty, although she plays a very different role in either.

However, exactly what is going on here is the big frustrating question that Amelia Moses never bothers to resolve. All we have is a film where a girl goes to a cabin and her best friend appears to be up to something, which may be taking Lee’s blood and appears to involve the friend making small incisions on Lee’s skin. Even then, much of what happens occurs while Lee Marshall is asleep or possibly drugged. Nothing is clearly resolved and no answers are ever given as to what is going on.

Certainly, Amelia Moses does a fine job when it comes to establishing paranoid and uneasy mood. The film has a great sense of something terrible about to happen even if Moses fumbles the third act. Also Lauren Beatty does the smiling friendliness with a sinister undertow well. It is a much better performance, one that all takes place in disquiet ambiguities, than the aloof and detached one she gave as the lead in Bloodthirsty.