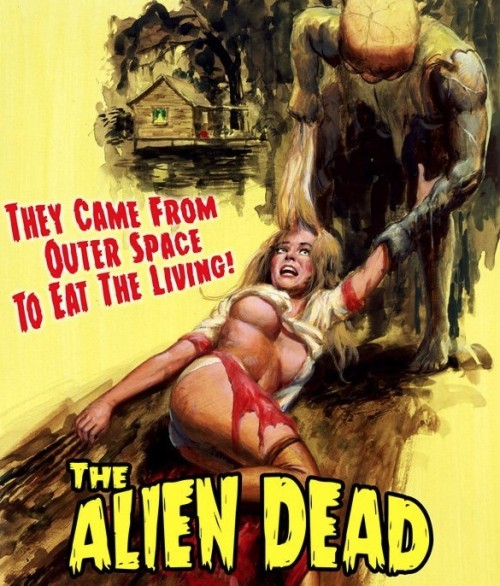 aka It Fell From the Sky

In the small town of Oveido, Florida, reporter Tom Corman investigates after a woman goes missing in the swamp. Other locals soon go missing too. Sheriff Kowalski is happy to put the disappearances down to an alligator but Tom discovers that the dead are returning to life. Tom traces the cause of this to a meteorite that came down in the swamps and has started to mutate the flesh of the dead, bringing them back hungry to devour the flesh of the living.

Fred Olen Ray is one of the most prolific B-budget directors currently at work and has directed over 140 films as of this writing. He found his calling just as the video revolution of the 1980s arrived and churned out numerous B movies in the science-fiction, horror, action and softcore genres. (See bottom of page for Fred Olen Ray’s other genre films). His works often parody the titles of 1950s B movies and include actors from or characters named after actors in these films. He was also one of the most prominent contributors to the Scream Queens fad of the 1980s wherein minimally talented actresses would shed their tops at the drop of a hat. The Alien Dead/It Fell from the Sky was the second film directed by Olen Ray. This was way back before the days of cable, dvd or even vhs so almost certainly The Alien Dead would have had a theatrical screening somewhere – most likely on a double-bill at a drive-in theatre.

Despite the science-fictional title, The Alien Dead/It Fell from the Sky is a zombie film. Fred Olen Ray was just making a copycat of George Romero’s Dawn of the Dead (1978). (One suspects that it was slapped with the title ‘alien’ due to the then-recent popularity of Alien (1979) and extraterrestrial monsters). From Romero, Olen Ray copies all the scenes of the dead pursuing the living and holding them down to tear out their innards. At which you have to say he does a serviceable job – the zombie makeups look reasonably effective and he does not stint when it comes to gore.

It is just that The Alien Dead/It Fell from the Sky is deficient in almost all areas outside of gore-letting. The plot is haphazard, seemingly made up on the fly. The acting is amateurish. The only recognisable name present is Larry ‘Buster’ Crabbe, the 71 year-old former Olympic swimming gold medallist who gained a fame in the 1930s in the titles roles of Flash Gordon (1936) and sequels, and Buck Rogers (1939). Crabbe only turns up in a few scenes and the rest of the show is played by no-name actors. Some of these are incredibly bad, in particular the cashier in a supermarket that the deputy flirts with who cannot stop herself looking at the camera twice and bursting into laughter. It is a scene that adds nothing to the film and could easily have gone on the cutting room floor.

Fred Olen Ray became a better filmmaker with successive films – not through any innate skill but by the simple act of repetition. Thus it is interesting to watch The Alien Dead/It Fell from the Sky after having seen a couple of dozen of the films that he made subsequently. Few of them you would actually classify as good but at least they have a dramatic polish and you can see that there Olen Ray pays more attention to things like story. He has since become far more of a tongue-in-cheek filmmaker and actively invites an audience not to take many of his films seriously. The other aspect that is underdeveloped here is Olen Ray’s penchant for bimbos and gratuitous scenes where women shed their tops. We do get a couple of topless scenes but Olen Ray would develop it into an obsession with later films.

The one distinctive element of a Fred Olen Ray film that we do get is his constant referencing and paying homage to other genre films. In this case, all of the characters are named after actors, crew and characters in Roger Corman films. The reporter hero is named Corman and we have characters named after Charles B. Griffith, the writer of many of Corman’s films, as well as Bernard L. Kowalski, director of the Corman-produced Attack of the Giant Leeches (1959). We have other characters named after regular Corman actors Dick Miller and Jonathan Haze, who were both in The Little Shop of Horrors (1960), and others named after Walter Paisley, the hero played by Dick Miller in A Bucket of Blood (1959) and Seymour Krelborn, Jonathan Haze’s hero of Little Shop.