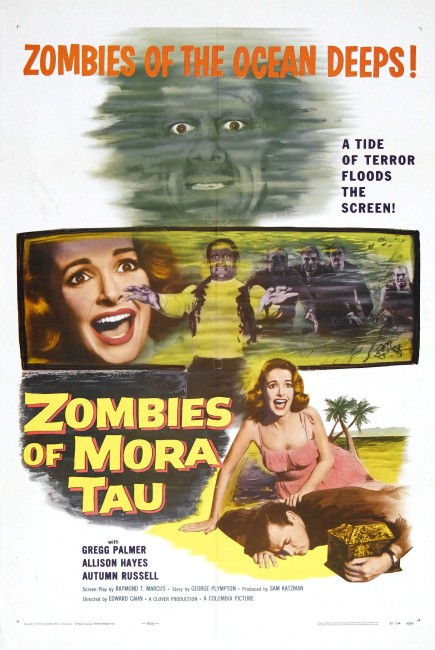 Jan Peters returns to the home of her great-grandmother on the African island of Mora Tau. At the same time, a salvage expedition led by George Harrison arrives to recover a cache of diamonds that was sunken offshore aboard the Susan B sixty years ago. The old lady warns them that zombies, the undead bodies of the original sailors of the Susan B, guard the treasure and have killed all who try to claim it. As they begin diving, just as she predicted, the group comes under attack by the zombies.

Zombies of Mora Tau is a zombie film back from the day before zombies were dumb shuffling things that only wanted to devour brains, before it required bullets in the head to despatch them and before their spread became associated with the collapse of civilisation. The original notion of the zombie came from a Western fascination with Caribbean voodoo where the zombie was seen more often as a creature that had its mind controlled – there was not even the association of resurrection from the dead with many of the early zombies. The most influential films on the genre were White Zombie (1932) and I Walked with a Zombie (1943).

Zombies of Mora Tau is a competently unremarkable entry in these early voodoo-based zombie films. The zombies are resurrected from the dead – there is a vague, although not very clear, connection to voodoo – something to do with a group of sailors that had been buried near a native temple. They are dumb, black-eyed creatures and seem to slowly stumble around – although their listing to the side and going “aaaargh” was still years ahead and these instead maintain a stiff-backed stance. Here they never seem to do much and the only means of driving off a zombie is waving a burning torch at them and their reacting to a primitive fear of fire – oddly, nobody throughout the film ever seems to think of setting any of them on fire (probably because this would have required pyrotechnic stuntmen, something that was no doubt beyond the film’s budget).

The downside of the film is that the zombies it produces are not a very interesting bunch and never get to do much – at least up until the mildly exciting scenes at the end where they board the ship and surround the house. Perhaps the most interesting thing is seeing how aspects of the plot or images here resonate (perhaps deliberately, perhaps unconsciously) throughout later zombie films. The cursed treasure and zombie pirates element was uplifted and used by Pirates of the Caribbean: The Curse of the Black Pearl (2003). The scenes with the zombie attacking underwater were done in Lucio Fulci’s Zombie – Flesh Eaters (1979), while the undead seamen killing all interlopers who come for their treasure was an essential element of The Fog (1980), and the image of the zombies rising up out of the ocean was used far more strikingly in Shock Waves (1977).

The film achieves some mild interest in its flat, pedestrian way. It could easily have served as the plot for a PRC or Monogram cheapie of the previous decade, the difference being that the lighting looks a whole lot more professional and this film has a relatively better budget. The only majorly unconvincing scenes are those shot underwater, which they clearly are not. There is an intriguing opening where Autumn Russell arrives on the island and is picked up by a cabbie (Gene Roth) to be taken to her aunt’s place and they run down a man who stumbles onto the road only for the driver to continue on unconcerned. Or the scene where the treasure hunters arrive on the island and Marjorie Eaton shows them the graves of the previous expeditions and then a set of fresh open graves before announcing that she has dug the new ones for them.

One of the mild notes of interests about the film is Allison Hayes, a minor B movie queen of the era in films such as The Disembodied (1957) – another voodoo film, The Undead (1957), The Unearthly (1957), The Hypnotic Eye (1960) and especially as the title figure in Attack of the 50 Foot Woman (1958). Here Hayes has fun playing a bitchy tramp – “she learned her manners in Eddie’s front street saloon,” it is said of her.