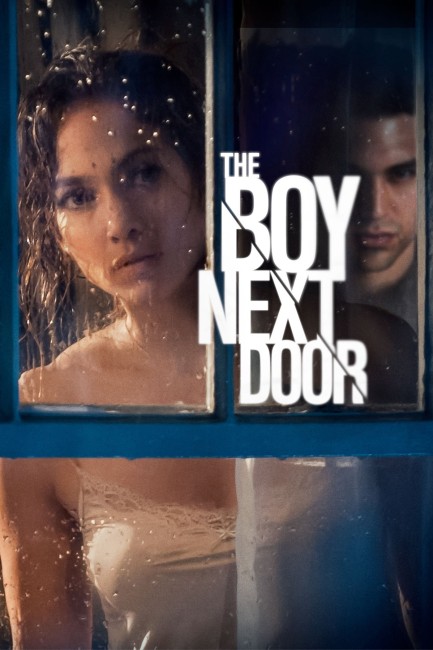 Schoolteacher Claire Peterson is still getting over the separation from her husband Garrett. She then meets Noah Sandborn, the handsome teenager moved in next door with his ailing grandfather. Noah quickly becomes best friends with Claire’s son Kevin and an indispensable part of their house. He also repeatedly tells Claire how beautiful she is. One night, while Kevin is away, Noah comes over and kisses Claire. This leads to them having sex. The morning after, Claire realises this was a mistake. However, Noah becomes persistent, fabricating an email to be transferred to her classics class, following and harassing her, placing up pictures of the video he has taken of their tryst, threatening to expose them and then becoming violent in his attentions.

It would be safe to say that The Boy Next Door was primed for critical ridicule even before it was released. For one, it features Jennifer Lopez. Back before she became a tabloid joke and the star of a series of banal romcoms, not to mention the widely pilloried disaster of Gigli (2003), there was a point where J-Lo seemed a serious and potentially quite good actress – as witness her work in films like Money Train (1995), U Turn (1997) and especially Steven Soderbergh’s Out of Sight (1998). Then however Lopez’s name went stellar, the celebrity machine took over and perception of her was reduced to a series of tabloid headlines, which heaped ridicule on everything she did. That said, most of the acting work she has done since 2000 seems to be sleepwalking her way through roles – as though she believed she was a celebrity in such a stratified air above everyone else that she no longer needed to make the effort. Even, as here, when she takes to producing the project herself, she does nothing to push the envelope in terms of acting. Indeed, The Boy Next Door is so utterly generic and lacking in creativity that you wonder what she possibly saw in the material that she needed to become personally involved.

The other disastrous component in The Boy Next Door is director Rob Cohen who has simply failed to make a good film ever. Look at the evidence – Dragon: The Bruce Lee Story (1993), The Skulls (2000), xXx (2002), Stealth (2005), The Mummy: The Tomb of the Dragon Emperor (2008) and Alex Cross (2012), as well as co-wrote Ritual (2002).. When I mentioned this to people at the preview who were holding out hope for The Boy Next Door, some were prepared to defend The Fast and the Furious (2001), which I suppose is okay as long as mindless car chases are your criteria for entertainment. I supposed I might grudgingly add the passable DragonHeart (1996). However, you have to look at the rest of Cohen’s body of work, which is premised around action sequences and special effects that frequently defy any kind of credibility, not to mention often descend into the outrightly absurd. Even when Rob Cohen seems to be playing it seriously in his films, they are works that defy any kind of intellectual content.

The Boy Next Door plays out like a cougar version of Fatal Attraction (1987). Well that is not quite the case but that is the way that most people are taking it. Certainly, it is welcome seeing a stalker film where the stalker is a male rather than a deranged woman, which is statistically the more likely probability than the surfeit of women stalkers we have had on screens since Fatal Attraction. However, there is not a thing in the film that feels like it has been assembled without first reaching to a cliche that had been tried in an endless number of other psycho-thrillers. Incidentally, the best and most frightening depiction of stalker behaviour I have ever seen on screen is to be found in Anna M. (2007).

The Boy Next Door was the first screenplay for Barbara Curry. I have to quote her side-splitting biography at the IMDB, written by Curry herself that states that “Barbara Curry holds a J.D. from Northwestern University School of Law and an MFA in Screenwriting from UCLA. She was an Assistant U.S. Attorney in downtown Los Angeles for nearly a decade, working in the Major Violent Crimes Unit on federal cases that included murder-for-hire, prison murder, racketeering, arson, kidnapping and bank robbery. She has taught criminal procedure at FBI Headquarters in Quantico, VA, and advanced trial advocacy at the U.S Justice Department in Washington, D.C.” All of which one can say that none of her procedural expertise comes through in the script. Honestly, Barbara, with this kind of background, if you wanted to break into Hollywood, I am sure you would have made a great consultant for some FBI/crime/courtroom tv show but in terms of developing a new career in scriptwriting, it is strongly advised that you go back to what you do best.

I have encountered stalkers – both male/female acquaintances who were and have been on the receiving end of the attention of female stalkers – so I feel somewhat qualified to offer an opinion here. Stalker behaviour resides in attachment disorder. The stalker becomes overly fixated on the object of their attentions, believing them to be the source of their happiness and fulfilment (irrespective of whether this is delusionary or responded from the other party). Their rejection snaps to vengeance and the desire that the other party must pay, be continually harassed, humiliated, followed and so on where the stalker’s wounded feelings of ownership clearly trump any desire of the other party not to have the other person in their life. In my opinion, a stalker’s attachment disorder comes from feeling of social inadequacy – of not having had attentions returned often in life so that any glimmerings (or fantasy of such) becomes much more intense than it would be for the average person and so deeply traumatic when not returned that it erupts into disturbed behaviour.

I just don’t get any of that in the character played by Ryan Guzman. He is handsome, self-assured and buffed – even introduced in a series of poses that almost seem a parody of the way that Michael Bay poses the women in his films. This is not a guy that you feel suffers attachment disorder or wants for women so much so that he would feel traumatically rejected and obsessed with one in particular. A far more interesting and credible treatment would have had him less handsome and socially assured – unfortunately, it seems that to seduce Jennifer Lopez the mandatory casting call is that you look hot. But then this never feels like a film filled with real human beings. As was the case in the equally ridiculous Enough (2002) when she tried to convince us she was a battered wife, Jennifer Lopez fails entirely to seem like your average suburban mom – even after a hard day at work, she relaxes in designer underwear and perfect makeup.

There is nothing in The Boy Next Door that feels like it has not been composited from genre cliches. The sad reality is that it is a treatment that avoids any of the potentially interesting ideas nested within it – a relationship between a woman in her forties and a teenager, between teacher and pupil, between jock culture assumptions that a woman must return male attentions – that could have travelled into the interesting or controversial with just one twist of the dial. All we have is a film that only charts a formula journey to a predictable end while avoiding any of the issues that might have been encountered along the way.