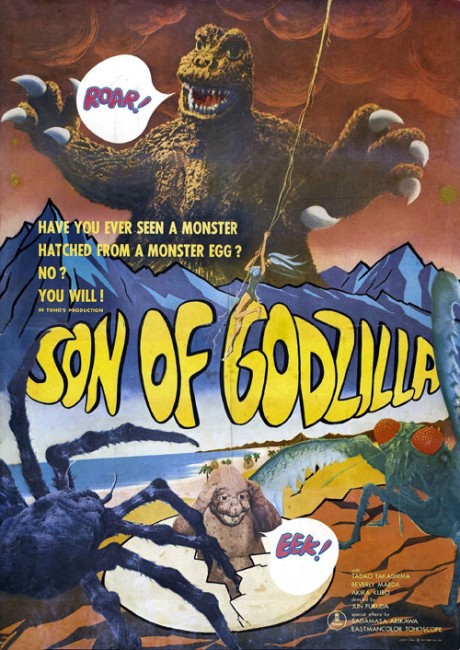 In search of a story, reporter Maki Goro parachutes down into the midst of an experiment in weather control on Soldier Island. However, the experiment goes wrong and the radioactive capsules sent up in a balloon explode, ravaging the island with 200-degree rains. In the aftermath, giant mantises and a giant spider overrun the island. The mantises dig up a giant egg that hatches a baby Godzilla. Soon the adult Godzilla arrives to claim its child and to teach it how to breathe fire instead of merely smoke rings.

Son of Godzilla was the eighth Godzilla film. By this point, director Ishiro Honda, who had started the series off, had opted for semi-retirement and the series had been taken over by Jun Fukuda who delivered the dreary previous entry Godzilla vs the Sea Monster/Ebirah, Horror of the Deep (1966) and would go onto make some of the series’ worst entries in the 1970s.

By this point, all serious threat that Godzilla had once maintained was gone and the series was well on its way towards being little more than a juvenile punch-up between guys in rubber suits. Rival Japanese studio Daiei had made Gammera the Invincible (1965), a blatant copy of the Godzilla series, where they had had some success by adding a young kid to the mix and Son of Godzilla saw Toho attempting to appeal directly to the same juvenile market. Oddly though, Son of Godzilla is a film that works likeably as a juvenile and is certainly the best of Jun Fukuda’s entries in the Godzilla series.

With its scenes of giant insects being body-slammed and games of hockey played with rocks between the mantises’ crab pincers, not to mention the jaunty carnival music that accompanies the young Godzilla every time he appears on screen, it is clear that this is not a serious entry in the series. Still, Son of Godzilla is a likeable entry. Despite a certain awkwardness of movement and the odd visible wire on the insects, the effects are decent – the glowing stipple eyes of the mantises are somewhat unworldly and the moment when the giant mantis takes to the air is good.

The latest addition to the fold Minya (although he is never actually referred to as such in the film) is a shamelessly cute one and surprisingly one that works – the bulgingly wide dopey eyes, the stumbling pratfalls and the mammalian whimpers make it adorable. The image of the child-abused Minya finally accepted into Big Daddy’s arms at the end is a tender one, despite its ludicrousness. The performances emerge as good, in spite of the usual abuses conducted in the dubbing.